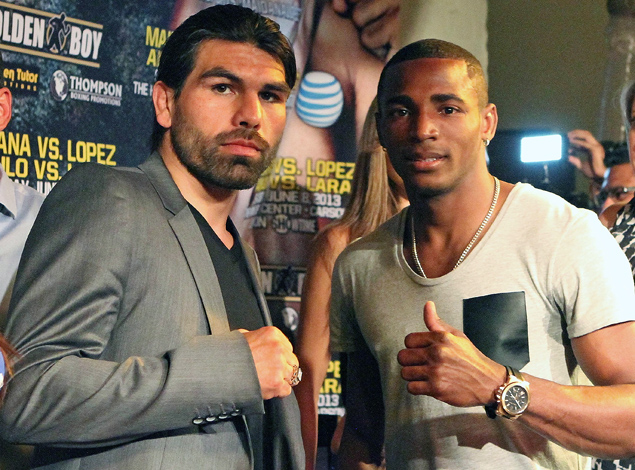 Erislandy Lara (right), THE RING’s No. 4-rated junior middleweight, believes he should be the No. 1-rated 154-pound contender and he aims to prove it by beating Alfredo Angulo (left) on June 8.

After a seven month hiatus from the ring, junior middleweight contender and former Cuban amateur standout Erislandy Lara returns to action on June 8 against Mexican tough guy Alfredo Angulo in what looks to be a crossroads fight that neither can afford to lose. The Showtime-televised bout, which is the main support to the Marcos Maidana-Josesito Lopez fight, pits the classic boxer (Lara) verses a pressure-fighting puncher.

Since turning pro, Lara has gone 17-1-2 with 11 stoppages but seems to be too skilled for his own good, representing too much risk for the high-profile fighters of the 154-pound division. The sole loss on his record was a highly questionable 12-round majority decision to Paul Williams, by far the best known fighter on his resume, almost two years ago. Lara hopes that if he can turn back the challenge of Angulo he’ll set himself up for bigger business later this year against one of the titleholders of the division.

The 30-year-old southpaw defected from his homeland in 2008 along with current 122-pound champ Guillermo Rigondeaux, having previously tried the year before. In doing so he left behind family and friends. In fact his family is now split with two kids in Houston who have never met their siblings back in Cuba due to his being barred visiting Cuba at this time.


Anson Wainwright: Firstly, you fight Alfredo Angulo on Saturday at the Home Depot Center. What are your thoughts on the fight?

AW: When you look at Angulo, how do you break his strengths and weaknesses down?

EL: He’s a tough guy who can punch and take a punch. Those are his strengths. His boxing skills are average and he seems to get tired as the fight goes into the later rounds, which are his weaknesses. 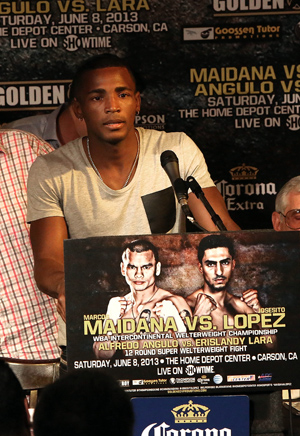 AW: If you win, you’ll be Saul Alvarez’s WBC mandatory challenger. However, some people have questioned how your promoter, Golden Boy Promotions, has moved you over the past few years, saying they haven’t got you the big fights that you perhaps deserve. How would you counter that?

EL: All I can do is continue to win the fights they put in front of me. Alvarez proved he’s the real deal by taking on Austin Trout. Many people thought he would never step in the ring with a good boxer and he proved he can win those types of fights. A win against Angulo will put me in a great position to challenge Canelo for his titles. All fighters want a chance to be the best; all I want is an opportunity.

AW: Going back to your days in Cuba, things there must have been tough for you.

EL: It was very difficult growing up in Cuba. The opportunity to succeed in life is not available. Once you get to a certain point, that’s it, there’s no room for growth.

AW: You were a top amateur, with the highlight being the 2005 World Championships. Could you tell us about that and also the rest of your amateur career?

EL: I’ve been in the ring with the best fighters from all parts of the world. I’ve defeated many great fighters which gives me confidence as a professional. Fighting in the amateurs was a great experience, one I’ll never forget.

AW: Have you seen friends or family since you defected?

EL: I haven’t seen any of my family or friends from back home. I miss them a lot, but they understand my position. And I fight everyday to better their lives and one day see them.

AW: Let’s talk about you as a person, what do you enjoy doing away from boxing?

EL: I’m a laid back type of guy who enjoys being with the family, playing video games, and love pigeons and dogs. Those are my hobbies outside the ring. Love being with my kids here in U.S., and miss my kids like crazy in Cuba.

AW: If we can look at THE RING magazine ranking’s at junior middleweight, could you share your thoughts and comments on your contemporaries?

3 – Miguel Cotto – Good fighter but past his prime.

5 – Vanes Martirosyan – Tall, smart, one of the underrated boxers in the division

6 – Carlos Molina – Tricky guy, holds a lot but one of the better guys in the division.

9 – Demetrius Andrade – Good boxer. I beat him in amateurs by 15-plus points.

EL: Rankings are there to give the fans an idea of who is coming up. They’re just the thoughts of a few writers who know the sport. Sometimes they are accurate and sometimes they are not. THE RING magazine has me No. 4. I say I’m No. 1.

AW: In closing, do you have a message for Angulo and the rest of the 154-pound division?

EL: I’m ready to take on all comers. Angulo stands in my way of becoming a world champion and I’m not going to let him derail me from my goal. Once I accomplish this feat, then I’m shooting for Canelo, Mayweather and the rest of the champions at 154 pounds.