Lem’s latest: Mayweather to ‘get the job done’ versus Alvarez 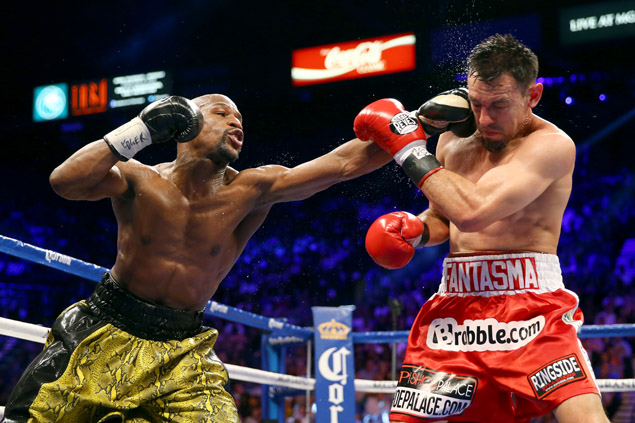 Floyd Mayweather Jr. has expressed extreme confidence as he heads into his third-ever fight against a junior middleweight, against RING and WBC champion Saul “Canelo” Alvarez, who was just announced as Mayweather’s opponent for Sept. 14 at the MGM Grand in Las Vegas.

Mayweather agreed to terms on Wednesday for a 152-pound catchweight bout with Alvarez (42-0-1, 30 knockouts) on the heels of the one-sided unanimous decision over Robert Guerrero for the RING’s 147-pound championship on May 4.

“But I truly believe I’m going to be victorious. I must train hard and dedicate myself. He’s young and hungry. He’s a guy that I know that I can’t overlook, and I don’t overlook no guy. I feel like once we get the job done, then there’s going to be another guy.”

Mayweather (44-0, 26 KOs) won the WBA’s “super” belt from Miguel Cotto by unanimous decision in May of last year, having competed in the 154-pound division for the first time against Golden Boy President Oscar De La Hoya, whom he dethroned for the WBC’s title in May of 2007.

Alvarez, who is 22 years old and already a major star in Mexico, scored the biggest win of his career with a unanimous-decision victory over previously unbeaten Austin Trout in April.

“I feel like once we get the job done, then there’s going to be another guy. There’s this guy and there’s that guy,” said Mayweather. “The only thing I can say is there’s been guys for 17 years. The only thing I can do is continue to beat the guy that they put in front of me.”

COULD ABNER MARES APPEAR ON THE MAYWEATHER-ALVAREZ CARD?

Coming off of a ninth-round knockout victory that dethroned Daniel Ponce de Leon as the WBC’s featherweight belt on the Mayweather-Guerrero undercard, Abner Mares (26-0-1, 14 KOs) would love nothing better than to make an appearance on the Mayweather-Alvarez show.

“We don’t have a date, but next week, we’ll sit down with Golden Boy and (Golden Boy CEO) Richard Schaefer to discuss what’s next for Abner,” said Frank Espinoza, Mares’ managager.

“To me, it makes perfect sense on many levels to bring Abner back on the Mexican Independence Day, Sept. 14, on the Mayweather-Canelo card. You have two fighters, Abner and Canelo, who are from Mexico. So we’re going to sit down next week, and we’ll discuss it.”

“We’re both happy, and we’re ready to begin the next chapter of my career. I think they’ll take me in the right direction,” said Magdaleno. “I learned a lot from my last fight, I’m ready for bigger and better things.”

MAIDANA TO TRAIN IN OXNARD FOR LOPEZ FIGHT

Marcos Maidana (33-3, 30 KOs) will be after his third straight stoppage victory on June 8 against Josesito Lopez (30-5, 18 KOs), having lost his 147-pound debut in February of last year to current IBF beltholder Devon Alexander.

“It’s been a big benefit. It’s been very good. I’ve been training with the team. The sparring is great in Oxnard,” said Maidana, referring to the California city in which Garcia’s gym in located. “My personal trainer has been very good. So this is my third fight with Robert, and I’ll be in great shape and ready for the fight.”

LOPEZ LOOKS TO PROVE HE STILL HAS IT AGAINST MAIDANA

Lopez was stopped in the fifth round of his last fight by Alvarez.

“I wouldn’t say that the move to 154 was a great decision, but I have no regrets on taking that fight,” said Lopez. “I fought one of the best fighters in the world, and I lost. But moving up to 154 has probably helped me to mold a little bit better into 147, so now I feel a little bit better and a little more comfortable now.”

“Obviously, Maidana is a proven strong puncher, so you have to be aware of that. It’s not that just because I felt Canelo’s power, that I can take it from Maidana. It has nothing to do with that. I think that I have a pretty good chin, and I can take as much as I can give, so I should be okay.”

In Maidana, Lopez is facing a difficult rival for the fourth straight fight.

Prior to fighting Alvarez, Lopez broke Victor Ortiz’s jaw on the way to a ninth-round knockout in June of last year. Three years earlier, Ortiz had lost to Maidana by sixth-round knockout, during which he was dropped twice and floored Maidana three times.

In September of 2011, Lopez dropped a disputed split-decision to current welterweight Jessie Vargas when they fought as junior welterweights.

Lopez said he enters the Maidana fight, in part, with the goal of showing that he still has plenty left.

“You know, I guess that I have to prove it. I went up against a stronger fighter, but a victory on June 8 will definitely help that,” said Lopez.