THE RING Magazine July issue: At a glance

29
May
by Michael Rosenthal 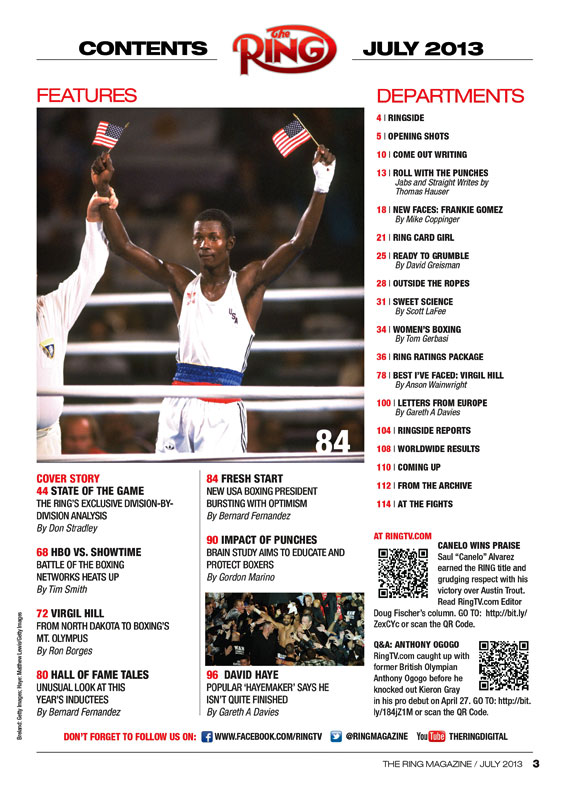 THE RING this month brings you one of its most popular annual features: the “State of the Game.”

The 23-page package, written by regular contributor Don Stradley, gives you an in-depth look at the state – good, bad and in between – of all 17 weight divisions and many other aspects of the sport.

Who’s the best puncher in the deep junior welterweight division? What was the best heavyweight fight in 2012? What welterweight matchup is a matchmaker’s dream? What super middleweight is the most fun to watch? 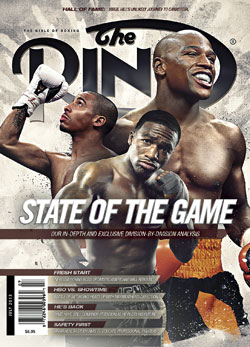 These questions and many more are answered in our exclusive, must-read report.

Also in the July 2013 issue, regular contributor Ron Borges writes in Top of the Hill that International Boxing Hall of Fame inductee Virgil Hill had an unlikely journey from North Dakota to the pinnacle of the sport.

Our Hall of Fame package also includes Tales from the Naked Village, written by regular contributor Bernard Fernandez, which provides anecdotes about the other boxing figures who will be inducted on June 9 in Canastota, N.Y.

And, in a special Best I’ve Faced, written by Anson Wainwright, Hill reveals his best opponents in 10 key categories. ÔÇª

Regular contributor Tim Smith explores in War of the Networks what impact Floyd Mayweather Jr.’s defection from HBO to Showtime will have on the television landscape. ÔÇª

In “We Can Become a Powerhouse,” Fernandez writes that the new president of USA Boxing – Dr. Charles Butler – is optimistic that the U.S. amateur team can thrive amid international rule changes.

The American men came home from the 2012 London Olympics without a medal. ÔÇª

Brains Matter, written by Gordon Marino, provides a look at an exhaustive brain health study designed to educate boxers and improve safety in the sport. ÔÇª

U.K. correspondent Gareth A Davies writes in Re-making Haye that the popular former heavyweight titleholder has come out of “retirement” and has big plans for his immediate future.