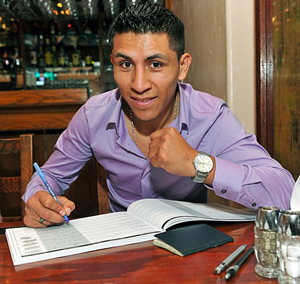 Burgos (30-1-1, 20 knockouts), THE RING’s No. 5-ranked junior lightweight, came up short in featherweight and 130-pound title challenges, the latter of which was a controversial draw with WBO 130-pound beltholder Roman Martinez in January. Most observers believed that Burgos, a 25-year-old Tijuana native, did enough to win the HBO-televised 12-round bout.

Both Artie Pellulo, president of Banner Promotions, and Ken Thompson and Alex Camponovo of Thompson Boxing, are confident that the aggressive boxer-technician will win his third crack at a world title.

“We know Juan Carlos Burgos can be the best 130 in the world. He is ranked  No. 1 in the world by the WBO and he should be challenging for that title in the very near future,” said Pellulo. “I’m happy to have been able to work with Burgos thanks to my friendship and association with Ken Thompson and Alex Camponovo, I know we will continue doing great things together.”

“Juan Carlos Burgos should be recognized as the best 126-130 pounder out there. He has done a great job in every facet of his young career and today we will solidify his future and we will make sure he gets what he so eagerly deserves, a belt around his waist. Although he is 25 years old, he is a veteran of the sport as he started his professional career at the age of 16 and we know one day he will be considered as one of the greats. This is a happy day for our company.”

“We have worked very hard to make sure Juan Carlos Burgos stays with our family. We know of his potential and value it as such, we will show him the way and he will get there soon. He tried to capture that elusive belt twice, once he was close but inexperienced (Hasegawa), the last time he was robbed (Martinez) and got a draw, so we are hopeful that the third time will be the charm.”