22
May
by Doug Fischer 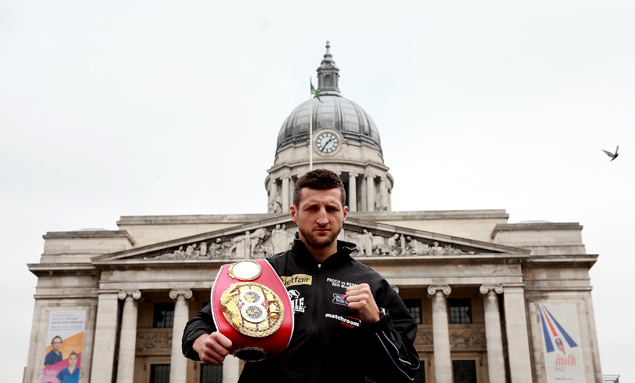 Carl Froch poses during a Monday public workout in front of Market Square in his hometown of Nottingham, England, in advance of his anticiaped rematch with Mikkel Kessler on Saturday in London.

As he concedes he has never boxed before an 18,000 sell-out crowd on home soil. There was the 9,000 that raised the roof in Nottingham a year ago while the 35-year-old hometown hero ripped the IBF belt from previously-unbeaten Lucien Bute in truly extraordinary, explosive fashion. Those ringside still talk about that heady atmosphere in disbelieving terms.

However, no matter how special that night was in his Midlands backyard, an evening which catapulted the Englishman towards overdue star status on his side of the Atlantic, Froch-Kessler II will not merely eclipse it in terms of tension, noise and excitement; it will blow it to smithereens. 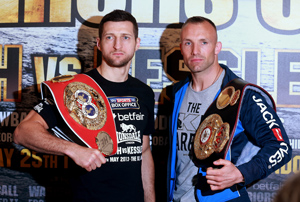 Understandably, for a guy who has gone beyond the pale to earn such support, recognition and respect, Froch (30-2, 22 knockouts) is positively buzzing at the prospect and predicts a barnburner repeat of his first meeting against Kessler (46-2, 35 KOs) – only this time with him emerging triumphant.

As the Brit, a three-time 168-pound beltwinner, revealed in a recent trans-Atlantic conference call with a selection of American boxing writers and publications, including RingTV.com.

Question: Kessler is suggesting he has a plan A, B, C and D for you on Saturday – so he is ready for all eventualities. You fought each other three years ago. Have you prepared in a different way this time, wary that he might bring something different to the table?

Carl Froch: “I don’t have an A, B, C or D plan. That’s ridiculous to go in thinking like that. Of course, you change game depending on what your opponent is doing. If you’re a top fighter, and someone is pushing you back, you have to get behind your jab, if you can. If not, you’re going to have to stand and meet him. You just never know how a fight will go.

“Plan A as a fighter is to hit your opponent with your best shots and not get hit yourself. That’s always Plan A. After that Plan B comes – if you need to stand and fight. That’s it. I just do what I have to – to win. That’s my job as a fighter. Whatever Mikkel Kessler brings to the ring on the night I have to counter that offensively. All these Plans A, B, C and D are a load of rubbish. I’m not even going into that. I’m coming to box, to the best of my ability.”

Q: It promises to be a sensational sporting occasion in the UK on Saturday. There is the soccer Champions League final earlier in the evening at Wembley in north-west London. Then it’s over to the Docklands for Froch-Kessler II. How does that make you feel to be responsible for putting the sport of boxing on a par with football in your country?

Froch: “It’s fantastic. The Champions League final is huge even though there are two German clubs in the final. Then there’s biggest fight of the decade later that night. It’s going to be a great weekend of sport and to be involved is amazing. I am a boxer but I love all my sport and so do the English people. Without it, the world would not be the same place. And it’s all top-level sport on Saturday. I think my fight is going to a great night, and it will be on those occasions when people look back in years to come and think, ‘yes that was a big fight between two warriors, who left it all in the ring’. I’m very excited.”

Q: What difference will it make having home advantage against Kessler this time? Does it mean you go with a different mentality to three years ago?

“The home advantage in boxing is an advantage. I am going to relish that on Saturday. It will be positive because when I let my shots go and then backing it up, the crowd will be going crazy and erupting – as opposed to hearing a pin drop. If you’re fighting away, your opponent can throw shots, be missing and the crowd goes mad. That can feel like it’s pushing you back.

“It’s got to help being at home, especially in front of 18,000 people. I don’t even know what that feels like as I’ve never fought in front of such a big crowd. But I’m looking forward to it. The atmosphere will be similar to when I boxed Bute in that a lot of people thought it would be a hard night and many probably expected me to lose because of what had happened against Andre Ward. 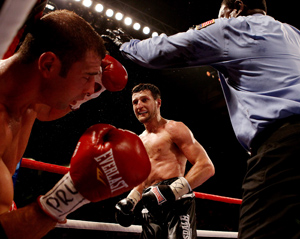 “But then when they saw me dominating from the start, they thought, ‘bloody hell’, and got into the zone. Everyone in Nottingham will be at the O2 – so it will be the same crowd plus a crossover of other fight fans, sport fans and those who are there for the occasion. Kessler will have his fans and cheers but I am expecting to have 90 percent of them. All I know it’s going to be electric. Multiply Nottingham by two.”

Q: Is there a danger of getting too pumped? This is a return that you have been waiting for three yearsÔÇª

Froch: “There’s no danger of that all. I am the consummate professional. I’ve had 13 title fights, I know what to expect. I am very cool, calm and collected in this game now. And to be fair, I think Mikkel is very similar. He’s had lots of top level fights and he won’t be fazed by the situation either.”

Q: The last fight went 12 rounds and was a thriller. Do you expect to pick up from where you left off or do you imagine it will be a matter of wait and see what happens?

Froch: “I understand what you mean but that fight was three years ago. It could be the 13th round come round one Saturday but I believe we will both start behind our jabs and it will probably be a bit touchy-feely for two or three rounds.

“But it won’t be long before we’re in punching range, trying to prove a point, trying to send a message, trying to let everybody know we’re here to win the fight. And even in those early rounds, I’ll be sending in big shots – like I did against Bute. It all depends how he responds.”

Q: Your win over Bute established you as astar in Britain. It took a long time. Must be great to have that at last?

Froch: “If feels really good, satisfying and humbling too. I had all those world title fights back to back, against such high calibre opposition, and it’s finally been recognised and looked at. People saw the Bute fight and that I’d come back from a loss and beaten another unbeaten fighter. Who else has done that?

“People who didn’t watch me before have gone back and looked at my other fights and seen this a guy who takes on all fights and all-comers. But I don’t expect anything. What my career demands comes from what I’ve done – against high-calibre opposition. I’ve not won them all, I’m not unbeaten but I’m able to bounce back and that’s what people want and love in a fighter. They love someone who picks himself up the floor.

“I’ve lost a couple of close fights. Once to Ward but to say I was outclassed by him is rubbish. I got beaten on points. And that Kessler fight, if it had been on British soil, I’d have got the decision.”