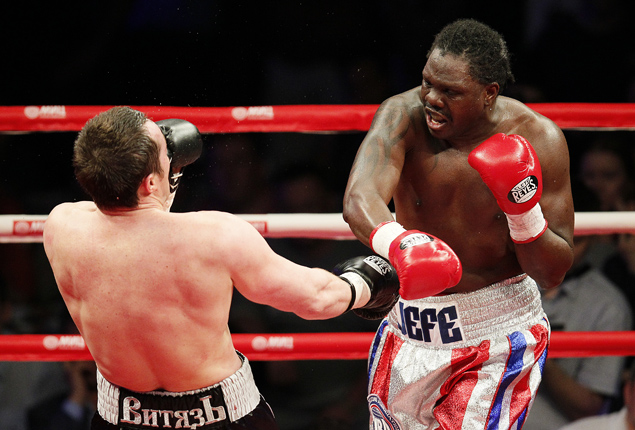 In his first fight in a year and a half, Guillermo Jones (right) regained his WBA cruiserweight title with a hard-fought, come-from-behind 11th-round KO of Denis Lebedev (left). The 41-year-old veteran re-entered THE RING’s rankings with the win.

At heavyweight, No. 2-rated Alexander Povetkin stopped Andrej Wawryzk in the third round, dropping the unbeaten but unproven fighter in the second and twice more in the third to finish him. It was an impressive win for Povetkin though Wawryzk was an unknown commodity. No change in the ratings.

At cruiserweight, No. 4-rated Denis Lebedev and the often inactive Guillermo Jones battled it out in a candidate for 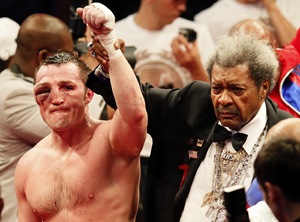 the fight of the year. Ledebev built an early lead while Jones displayed a good jab and strong chin. Lebedev’s right eye was swollen from the early rounds and soon closed in grotesque fashion allowing Jones to change the course of the fight and finally beat the will out of the Russian contender by the 11th round.

Jones’s impressive win will have him re-enter the ratings at No. 4, but Ledebev, who fought well and was ahead on teh score cards at the time of the stoppage, will only drop to No. 5, which pushes No. 10-rated Rakhim Chakhkiev from the rankings.  Nos. 5-9 will drop one spot each. We’ll be looking at upcoming schedules to see if No. 6-rated Latif Kayode (inactive for 11 months) and No. 8-rated Troy Ross (inactive for 9 months) have any fights scheduled on the horizon due to their current inactivity.

At middleweight, Andy Lee scored a first-round win over Darryl Cunningham. No change.

At welterweight, Devon Alexander outclassed Lee Purdy before Purdy’s corner stopped the fight between the seventh and eighth rounds. The fight was originally set for the IBF welterweight title (that Alexander holds) but Purdy failed to make weight and the fight was made a non-title bout. Alexander hurt his left hand in the first round which may have prevented him from a clean TKO or KO. Purdy took the fight on a month’s notice and his regular trainer was not in his corner but that’s not to take anything away from Alexander’s performance. Alexander fought well but this win is not enough to move him up in the ratings with the top five scheduled for fights soon. No change.

Sugar Shane Mosley got his first win since beating Antonio Margarito four and a half years ago by out-pointing tough, young Pablo Cano over 12 rounds.

At junior welterweight, Lamont Peterson and Lucas Matthysse was one of the most anticipated fights of the year in the strong 140-pound division.  Matthysse scored a career best win stopping Peterson in the third round, proving his power.

THE RING junior welterweight Champion, Danny Garcia, was in attendance and many fans are looking for Martthysee to challenge Garcia for his title, perhaps on a Sept. 7 date set aside for this match. Matthysee cannot move higher at this time since he is already rated No. 1. However, Peterson, who was rated No. 2 going into the Matthysse fight, will drop to No. 4 with Amir Khan and Mike Alvarado moving up one spot each. The new junior welterweight top five will be:

4. Peterson (with numbers 5-10 remaining the same)

At junior lightweight, Will Tomlinson out-pointed former titleholder Malcolm Klassen over 12 rounds in a hotly contested bout that was lopsided on the scorecards. This win puts Tomlinson in the ratings at No. 10 replacing Sergio Thompson, who has been on a good run himself. There is not much separating Tomlinson and Thompson except for the lopsided loss to Alisher Rahimov suffered by Thompson.

At flyweight, former 108-pound titleholder Edgar Sosa fought a 12-round war with former RING junior flyweight champ Giovani Segura, winning a close unanimous decision. Sosa, who knocked out fellow former titleholder Ulises Solis in March, continued to increase his value as a world challenger.  Sosa, who was rated No. 7, will up in the ratings to No. 5, ahead of Toshiyuki Igarashi, Milan Melindo and Juan Carlos Revenco, who will each drop down one spot.

Email Chuck Giampa, the Chairman of THE RING Ratings Committee, at [email protected]