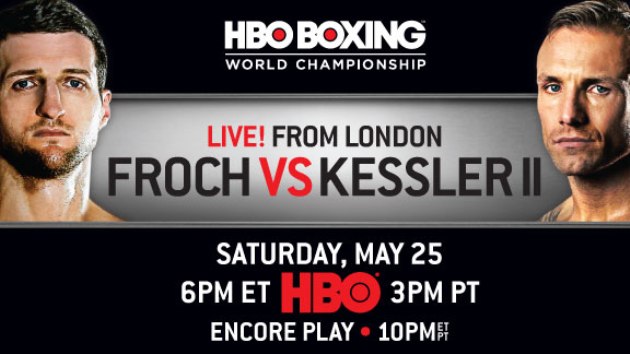 Ward (26-0, 14 knockouts) will be ringside with Jim Lampley, Max Kellerman and unofficial scorer Harold Lederman as Froch (30-2, 22 knockouts) and Kessler (46-2, 35 KOs) meet in a rematch of their 2010 bloodbath, when Kessler beat Froch by unanimous decision as part of Showtime’s Super Six World Boxing Classic.

Ward, 29, has earned unanimous decision victories over both Kessler and Froch, the former in November of 2009 and the latter in 2011 for the RING, WBA and WBC belts.

Since falling to Ward, Froch has scored consecutive stoppage victories over previously unbeaten IBF beltholder Lucian Bute by fifth-round knockout, and Philadelphia’s Yusaf Mack in the third round.

Kessler earned his fourth straight win and his third consecutive stoppage victory with December’s third-round knockout of Ireland’s Brian Magee, who Froch KO’d in May of 2006.

KESSLER: ‘IT WILL BE A GREAT FIGHT…DON’T MISS IT’

HBO issued a training blog on behalf of Kessler, which reads as follows:

“Hello fight fans. It┬┤s one week until the big fight in London on HBO and let me tell you one thing, I am ready. I think Froch against me is the most exciting fight in the super-middleweight division.

“Carl Froch is warrior like me, we are cut from the same cloth. We will both leave it all in the ring again, just like we did three years ago. There will be no pushing, no holding, no head-butting. We will continue where we left it in our brutal first fight three years ago.

“Carl will come to fight. Carl and I have fought all over the world, I┬┤ve been in Wales, Germany, Australia and the U.S. That┬┤s what true champions do – take the best fights out there against the best opponents, all over the world.

“The last time I fought on HBO was when I faced Joe Calzaghe in front of 55,000 fans at Cardiff’s Millennium Stadium. I never got the rematch, although I really wanted it. That is the reason why I give Froch this fight. He came to my place, I won and I promised him we’ll fight again. I am a man of honor, and I will stick to my word. It┬┤s only fair to have the rematch in London. The fight sold out in one day – all 18,000 tickets gone in a few hours! That tells you how special the fight in Europe is.

“We┬┤ve had a great training camp. I have my own gym in Copenhagen. I can do all the training in there. My physical trainer Thomas Macon makes sure I stay in shape all year around. Jimmy Montoya came over in March to do the boxing training. I love Jimmy, he is one of the best trainers in the world. I’ve known him for a long time. He came up with the game plan to beat Froch in the first fight, and we have created something special again this time.

“Beating Froch was very big for me. I had just lost the opening fight of the Super Six tournament and a lot of people were doubting me. But I got in there and proved them all wrong. I remember I was surprised by Froch. He was really tough and he’s got these long arms and a lot of power. I caught him with a right in the eighth round, but he came right back.

“The last two rounds were insane, we just fought our hearts out and left it all in there. The sell-out crowd was on their feet, and I’ll never forget the feeling when my arm was raised. I want to feel the same again on May 25. It will be a great fightÔÇªdon┬┤t miss it.”

“For any top class boxer, the chance to avenge a defeat is massive. I don’t lose many fights and neither does Mikkel, but when you do, the first instinct is to see them the next day and fight again. Three years have passed since the defeat in Herning. I wouldn’t say it bothers me every day, but to finish my career without the opportunity to face Mikkel again would be tough to swallow. I feel the same about Andre Ward too, but it’s less intense, as Mikkel and I are cut from the same cloth — proper fighters who put it all on the line and go toe-to-toe in battle.

“Does the defeat irritate me? Of course. Do I feel cheated by it? No. When a fight is as good as the first one and you don’t win you are down after the event and you look at things in the fight that perhaps didn’t go your way. But I lost that fight fair and square. I’ve got no problem with the decision, and it still remains a pleasure and privilege to have been involved in one of the best fights for a long, long time in both Denmark and in the super middleweight division. But it would have been better if I’d won of course.

“Physically, I’m in fantastic shape. I am a clean liver. I don’t drink or smoke, and I don’t really like fast food. I don’t balloon up during fights, and that’s obviously a huge advantage, as I can concentrate on the fight without worrying about making weight. I’m in a great place mentally too. My little girl, Natalia, arrived a couple of weeks ago, and both baby and Mum, Rachael, are doing great. Her arrival has been perfectly timed, as it was a nice distraction from the training, and then, I refocused and became even more energized.

“I can understand that people would have this as a pick’em fight, as we’re both World class operators with huge power and with punch resistance. It’s the reason why it’s the most hotly anticipated pure boxing match for some time now. I believe I will win, Mikkel believes he will win. Kalle and Nisse Sauerland will think they can come to England and return with two belts. [MatchroomSport’s] Eddie Hearn knows I am going to win, my fans are coming to cheer me to victory, Mikkel’s fans are traveling over to have a title party in London.

“My point? Everyone has an opinion, because it matters. This fight has captured everyone’s imagination, and the pundits down to the casual boxing fan all have their opinions, which is fantastic, even though ultimately, only Mikkel and I will decide who takes the glory. I don’t like to look beyond the fight and think ‘what if?’, as the focus is solely on Mikkel. A defeat would be a bitter pill to swallow, and two losses to the same man is tough.

“The positives are what I am looking at — huge fights with Andre Ward and George Groves are possibilities, and if the second fight is as good as the first, maybe we’ll do it again. It’s round 13 from three years ago. We’ll pick up where we left off, and it’s going to be action packed. Like animals, it’s our instinct to fight, and that’s just what people are going to get, fireworks. It’s going to be one of those nights that if you are not there, and not watching on TV, you are going to regret it as you’ll miss something truly special.”

HBO’s documentary 2 Days: Gennady Golovkin will debut on Saturday, June 8 at midnight ET/PT in advance of the WBA middleweight titleholder’s bout against Matthew Macklin (29-4, 20 KOs) on June 29 in Mashantucket, Conn.

The Kazakhstan-born Golovkin (26-0, 23 KOs) most recently earned his thirteenth consecutive KO with a third-round knockout of Nobuhiro Ishida, who was stopped for the first time in his career. The win over Ishida followed Golovkin’s bloody, seventh-round stoppage of Gabriel Rosado at New York’s Madison Square Garden in January.

Macklin, who turned 31 on May 14, was last in the ring for September’s first-round stoppage of ex-titleholder Joachim Alcine after losing back-to-back fights against Sergio Martinez and Felix Sturm.

Another edition of HBO’s The Fight Game, hosted by Lampley, a four-time Sport Emmy Award-winning broadcaster, will air on June 29 following the network’s broadcast of Golovkin-Macklin.

An Argentine who lives in Madrid, Cuello is riding a six-bout winning streak that includes four knockouts, including stoppages in his past two fights since falling by sixth-round knockout to Saul “Canelo” Alvarez in July of 2010. Cuello’s only other loss was by unanimous decision to Julio Cesar Chavez Jr. in March of 2009.

ARASH USMANEE RETURNS TO THE RING ON JUNE 14

The event is being promoted by Vito Mielnicki of GH3 Promotions and Greg Cohen of Greg Cohen Promotions (CGP) in association with First Round Promotions.