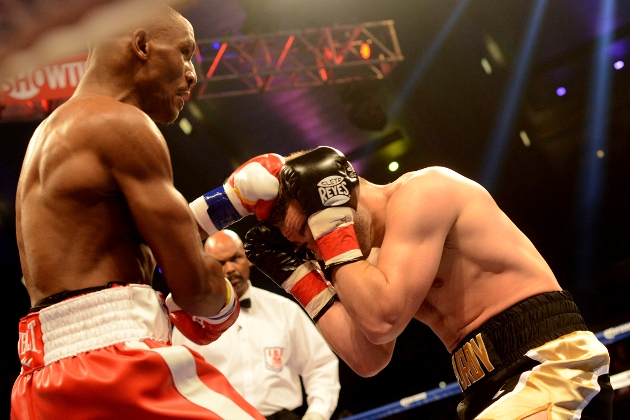 The trainer of Devon Alexander (left) claims that the fighter damaged his left hand while landing this punch against the head of Lee Purdy, whom Alexander stopped after seven rounds on Saturday night.

Cunningham said Alexander broke his hand in the first round against Purdy (20-4-1, 13 knockouts), a 25-year-old Brit who was knocked out for the first time in his career.

“It’s broken. The doctor in the dressing room told us that it was broken,” Cunningham said of Alexander (25-1, 14 KOs), a 26-year-old former two-belt titleholder as a 140-pounder.

“But Devon’s going to see a hand specialist and we’ll know exactly to what extent that it’s broken, and what actual damage is done tomorrow when we see the specialist.”

Purdy had won his previous four bouts by stoppage, and was coming off a ninth-round TKO victory over veteran gatekeeper Cosme Rivera in March. Purdy’s three previous losses were by decision to Peter McDonagh, Denton Vassell and Colin Lynes in December of 2008, April of 2010 and November of 2011, respectively.

Meanwhile, Alexander has not lost since January of 2011. That’s when, as a junior welterweight, Alexander suffered an 11th-round technical decision loss to unbeaten fellow titleholder Tim Bradley, who went on to score a controversial split-decision over Manny Pacquiao that earned him the WBO 147-pound belt last June.

Alexander-Purdy was the co-featured bout to RING No. 1-rated junior welterweight Matthysse’s non-title, third-round knockout over RING No. 2-rated 140-pounder and IBF titleholder Lamont Peterson in a 141-pound matchup.