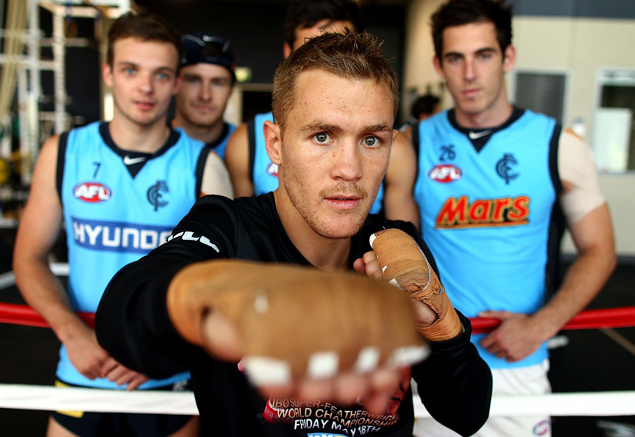 Will Tomlinson, known as “Wild Will,” says American fans will embrace his style once they see him fight. “When’s the last time you can remember a white boy that wars like a Mexican and boxes like an African American? That’s what I bring to the table,” he says.

This Thursday unbeaten Australian junior lightweight Will Tomlinson fights for the first time in since he impressively outpointed tough Panamanian Irving Berry last November when he takes on former IBF 130-pound titleholder Malcolm Klassen, who will no doubt view this as the perfect opportunity to once again gatecrash the world scene.

Tomlinson (20-0-1, 12 knockouts), a 26-year-old boxer-puncher comes from the Blacktown area of Sydney, is attempting to make the third defense of the IBO crown that he won 18 months ago with a wide decision over Alan Herrera. If Tomlinson, who fought at the 2007 World Championships during his amateur days, is able to win it will help him move from the shadows of the 130-pound division. 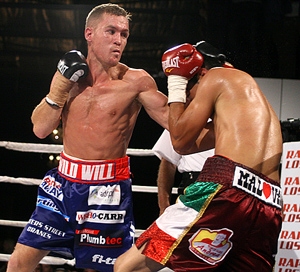 “Will is a great talent and a very fan friendly and TV fighter,” Shaw says of Tomlinson’s style. “This will be a major step up for Will, and a win over Klassen will thrust him to the top of the 130-pound division.”

Shaw added that he hopes to bring his young charge to America soon.

Anson Wainwright: What are your thoughts on fighting Malcolm Klassen?

Will Tomlinson: I’m very excited for this fight. Klassen is a very classy fighter and I’m expecting a good fight out of him. However, I’m feeling very positive about the fight and I’m ready to rise to the challenge and do whatever I have to do to remain the champ. I will win this fight, I just want to make sure it’s in spectacular fashion.

AW: Without overlooking Klassen, what are your goals for this year?

WT: My goals for this year are just to continue to put on great fights for the fans and continue to challenge myself by taking the best fights available. Hopefully, I get a shot at fighting for another belt this year. I have had interest from multiple teams regarding unification, and after Klassen, my goal is to be the only unified champ in the division.

AW: In your last contest you went the distance, widely outpointing Irving Berry. Can you talk us through that fight? 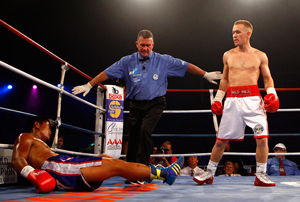 WT: That fight was a bit of a tricky awkward fight. I felt that I hit Berry early and he felt my power and decided he was content just to go the 12 rounds rather than press forward and try and win the fight. But at the end of the night I easily did enough to win, as which I have become accustomed to.

People wrongly look at my record and think I am not a puncher. The problem isn’t my power, the problem is when the opponent feels my power they will rather stay alive and run than get knocked out. Even Daniel Ruiz who is a real tough Mexican ran. If the lights didn’t go out in the venue, I am more than sure I would have put his lights out.

AW: Who are the key members of your team? Your manager, trainer and promoter?

WT: I have a three-man team, which includes my trainer Lincoln Hudson, my manager Fidel Tukel and my strength and conditioning trainer Nick Comofay.

AW: What sort of things do you do?

WT: Basically my training camp goes for eight weeks, which is made up of early morning strength and conditioning sessions, either running or weights focusing on speed and power, then my night sessions are in the gym boxing… I’ll generally spar every second to third day.

AW: You’ve added Gary Shaw to your team. He’s a promoter with vast knowledge of the game. He’s been successful with fellow Australians Vic Darchinyan and Daniel Geale. What has he added so far?

WT: Having Gary now part of our team means a lot to my progression in the international scene. He is widely regarded as a top promoter worldwide and it will be shown, the power he possesses, after he lines me up some unification bouts and I win those bouts for him. I’ll make him proud, I assure you.

AW: So far all of your fights have taken place in Australia. Is a fight in America something you have your eye on now that you’re with Gary?

WT: Yes, definitely I have my eye on establishing myself in the States. As soon as I get through Klassen I will start to plan the big move to the States. The U.S. is waiting for a boy like myself to come there and put on a show. When’s the last time you can remember a white boy that wars like a Mexican and boxes like an African American? That’s what I bring to the table.

AW: What do you think of the 130-division and the other current champions: WBC titleholder Takashi Miura, WBA beltholder Takashi Uchiyama, the IBF’s Argenis Mendez and WBO king Roman Martinez?

WT: They’re all great fighters and solid champions, but if I was given the shot to fight any of them I would take it in a heartbeat! I truly believe I beat them all. Hopefully, with the opportunity I will be given after this fight I will prove that.

AW: Is unifying with them something you’d like to do?

WT: Yes of course! My major goal this year is add another belt to my collection. I want to be the first Australian-born undisputed champion of the world. Kostya (Tszyu) and (Vic) Darchinyan were freaks, but I am certain I can emulate them.

AW: In closing do you have a message for Klassen and the 130-pound division?

WT: Get ready for a tough night Down Under, mate! You’re going to need all the help you can.

Questions and/or comments can be sent to Anson at [email protected]and you can follow him at www.twitter.com/AnsonWainwright.