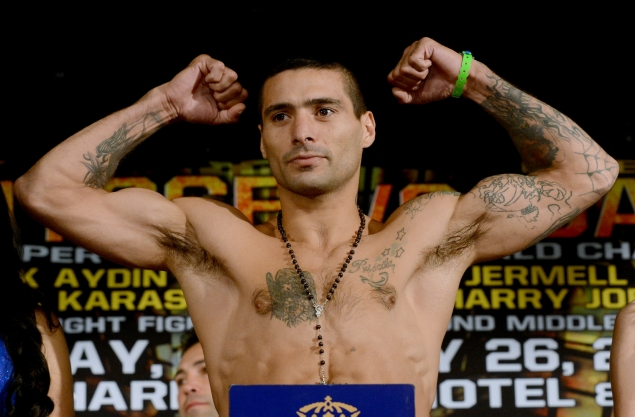 Armed with a formidable knockout ratio as well as a new association with advisor-to-the-stars Al Haymon, RING No. 1-rated junior welterweight Lucas Matthysse is supremely confident heading into his May 18 clash with IBF beltholder Lamont Peterson at Boardwalk Hall in Atlantic City.

In victory over Peterson, who is rated No. 2 in the division by THE RING, Matthysse (33-2, 31 knockouts) could position himself for a major fight against RING, WBA and WBC champion Danny Garcia on Sept. 7, according to Golden Boy CEO Richard Schaefer.

Matthysse spoke to RingTV.com in an interview translated by Golden Boy’s Ramiro Gonzalez.

“That was a very good move for myself to be with Al Haymon,” said Matthysse. “I’m extremely happy with my team now, and I know that I can rely on someone like Al Haymon to develop me and to bring me to the big, big fights that I want and deserve.”

“I’m talking about the big fights like the one with Danny Garcia [who is also advised by Haymon], and all of the 140-pounders, and even those with the 147-pounders. They’re all going to happen for me. With Al Haymon advising me, that’s one of the great moves that I have made in my career.”

During his in-the-ring interview following his unanimous decision victory over Zab Judah on April 27, Garcia said he thought Peterson would emerge victorious against Matthysse.

Matthysse’s last two losses were to Judah and current IBF 147-pound champion Devon Alexander in November of 2010 and June of 2011. In both cases Matthysse fought in hostile territory and dropped his opponents (the first knockdown in Alexander’s career), and both fights ended in narrow split decisions.

“Maidana and I, we’re different fighters. We have different styles,” said Matthysse, who once stated that he was “a more complete” fighter than Maidana.

“So he has his style, and I have my own style. I honestly respect everybody’s opinion, but the only thing that I can say is that we’re different fighters who have different styles.”

In between the losses to Judah and Alexander, Matthysse scored an an eighth-round stoppage of ex-titleholder DeMarcus Corley in January of 2011. His past three wins, all by stoppage, were over former titleholder Humberto Soto, previously unbeaten Olusegun Ajose and Mike Dallas Jr.

But Matthysse is facing a man who is similarly on a roll in Peterson, who is 4-0-1 with three knockouts since falling to current WBO welterweight beltholder Tim Bradley by unanimous decision in December of 2009.

In his past two triumphs, Peterson (31-1-1, 16 KOs) rose from a first-round knockdown to earn a split-decision over two-division titlewinner Amir Khan in December of 2011, and and then scored an eighth-round stoppage of ex-titleholder Kendall Holt after dropping him in Rounds 4 and 6.

“Yes, absolutely. I hope that Peterson is going to be standing there and not moving too much. I saw his last fight, and he’s a solid fighter, and good fighter. I hope that he is there the same with me, exchanging. I would love that. So I think that I have a great opportunity with Lamont Peterson,” said Matthysse.

Trainer Freddie Roach, who guided Khan against Peterson, agrees with Matthysse, whom he has picked to win by stoppage. 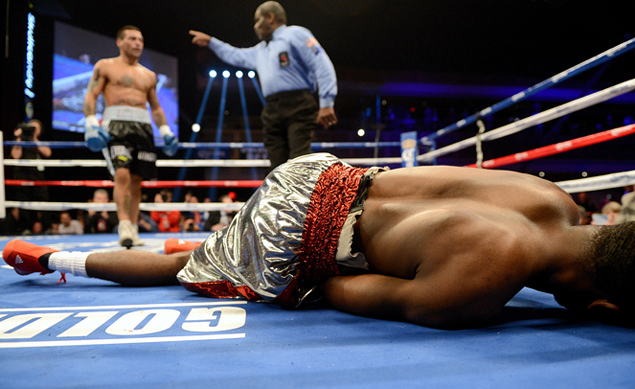 “To hear those words from a legendary trainer like Freddie Roach makes me feel all the more hungry for this fight. They mean a lot. So I am absolutely going to knock him out,” said Matthysse.

“I trained so hard for this fight, and I’m very, very strong, and I do believe that I am going to knock Peterson out. “I’m not concerned about the judges against Lamont Peterson. Not at all, because, like I said before, I’m going to end the fight earlier. I’m coming in with the mentality to win by KO.”

It’s a shot Matthysse himself would welcome if he looks spectaculer in vanquishing Peterson.

“That would be a great thing. That would be excellent for me. But first, I would like to unify at 140 pounds,” said Matthyse.

“And then, I would looke to go up to 147 pounds and pursue Floyd Mayweather. But it’s a process. First, I’m going to win by KO. I’m going to knock out Lamont Peterson on May 18 in Atlantic City.”