08
May
by Doug Fischer 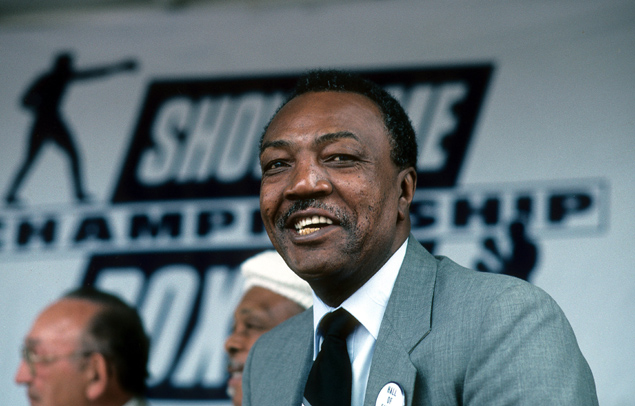 Bob Foster at his 1990 International Boxing Hall of Fame induction in Canastota, N.Y. The former light heavyweight champ, who reigned from 1968-1974, finished his career with a 56-8-1 record with 46 knockouts.

Perhaps sparked by the prime Mike Tyson’s first heavyweight championship reign, Hip Hop music has had a close association with professional boxing over the past 25 years. 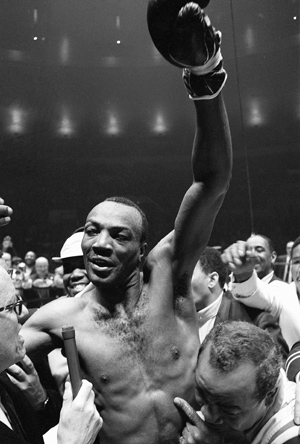 Rappers identify with fighters, who are inspired by (and often make their ring walks to) Hip Hop music. However, few rappers are as obsessed with the fight game as R.A. The Rugged Man, an unapologetic hardcore boxing fan who’s got a lot of love for the history and old-school players of the sport.

One of R.A.’s favorite fighters is Bob Foster, the former light heavyweight champ who once held the division record for title defenses. Standing 6-foot-3 with a wide-reaching 79-inch wingspan, the hard-punching native of Albuquerque, N.M., was an absolute terror in the 175-pound division, where he brutally blasted fellow future hall of famer Dick Tiger for the title and then proceeded to knockout top contenders, such as Roger Rouse, Andy Kendall, Chris Finnegan, beltholder Vicente Rondon and Mike Quarry (in what was probably his most chilling stoppage).

Foster was so fearsome, he often took to the heavyweight division (even though he never weighed more than 189 pounds) where he often fell short, but also faced a two all-time greats in Muhammad Ali and Joe Frazier.

Foster was inducted into the International Boxing Hall of Fame in 1990.

R.A. spoke with Foster a few years ago for an as-yet unpublished book on boxing. It is reprinted here with the rapper/writer’s permission.

R.A. The Rugged Man: Is it true that you got kicked out of high school for fracturing someone’s skull?

Bob Foster: (Laughs) Where’d you hear all that? Yeah, we was in 10th grade, I asked to see his comic book and he wouldn’t do it. The next day I brought comic books and I wouldn’t let him see mine, so he goes and takes my book. I hit him with a left hook and fractured his skull. Knocked him out cold. (Laughs.)

R.A.: When you won the title form Dick Tiger, that knockout was brutal. He hadn’t been stopped in 70-something fights.

Foster: Yeah, but I knew I was gonna stop him. I had too much punching power for them light heavyweights. Dick Tiger was about 5-foot-8, maybe, 5-foot-6, a short guy. As soon as I saw him I knew, no way in God’s creation he was gonna beat me.

Foster: Henry Hank was a devastating puncher; this was a middleweight knocking out light heavies. The first fight I hit him with a left hook to the body. He yelled out “OOOHHHH!” You could hear that all over the arena. He was crawling on his stomach, trying to crawl out of the ring. He didn’t know where he was he was in so much pain ’cause I almost ran half my arm up in his ribs (laughs). The second fight, I busted him up real good, I closed both 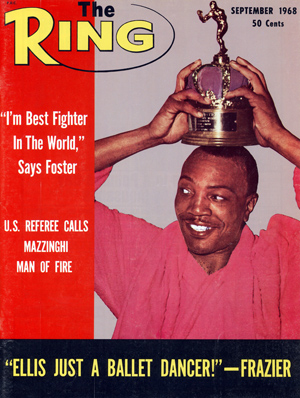 R.A.: Where do you put yourself on the list of pound for pound all-time hardest punchers?

Foster: Number one. Couldn’t nobody out there out punch me. I know they couldn’t.

R.A.: So who would you say was number two?

Foster: S__t, I don’t know. They ain’t never hit me. Outta the guys I fought, Roger Rouse, this white boy outta Montana, that sucka could punch, boy. But he didn’t look it, he didn’t have the build or nothing, he was just a regular, typical white boy. He hit me on the chin in the first round, man, electricity started from my head, went all the way through my body down to my feet, my feet was on fire, man. And I was standing in the ring, shaking my feet, trying to put the fire out. I went back to the corner I said, ‘What the hell did that son of a bitch hit me with?’ I thought he hit me with a brick. They said ‘It was a left hook, keep your hands up,’ but I busted him up, and beat him in the fifth round, they stopped the fight.”

R.A.: What do you think was your most devastating knockout?

Foster: When I hit Mike Quarry, I thought I killed him. He was laying down and his feet were shaking, he was trembling. I was looking in his face and you couldn’t even see the pupils of his eyes, they were rolled way back up in his head. And Billy, my trainer, said, ‘Come on Bobby, don’t look at him.’ Billy thought I killed him too. And I said ‘Well, the kid is dead.’ And Billy said ‘Well f__k it, he didn’t have no business being in here.’ Billy was cold blooded, man (Laughs).

R.A.: That was a tough night for the Quarrys. That fight was part of ‘The Soul Brothers vs. The Quarry Brothers’ card.

Foster: Yeah, Muhammad Ali was going to fight Jerry Quarry and I was going to fight Mike Quarry. Ali bet me a thousand dollars that he’d stop Jerry before I stopped Mike. I said “You got a bet, Ali, ’cause you don’t hit as hard as I do.” I stopped Mike in the fourth he stopped Jerry in the seventh. So I said “Hey Ali, give me my money, man.” And he says “What money?” I said “Now, you want me to hit you the way I did Mike?” He said “No, I sure don’t” and he paid me. 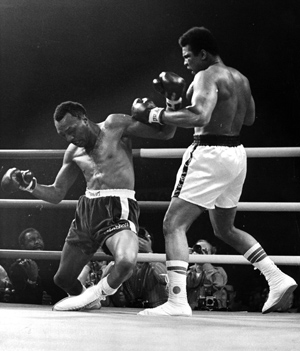 R.A.: You made a whopping $25 in your pro debut. How much did you get when you fought Muhammad Ali?

Foster: $200,000. But Ali couldn’t punch. Ali couldn’t bust a grape. I don’t know how he kept knocking all these heavyweights out unless they had a glass jaw. Ali didn’t have the power of (Joe) Louis and (Rocky) Marciano and (Ezzard) Charles, but he had speed. He’d hit you pow pow pow pow pow pow pow, and then you’d look around, you don’t see him no more. He might be behind you. But the guy didn’t have too much power. Look at how many times he hit Joe Frazier. They stopped that third fight ’cause Frazier was taking a pretty good beating but he couldn’t knock Joe out.

R.A.: How much did you get paid to fight Frazier?

Foster: $250,000. That was big money in them days. A brand new Cadillac only cost you $6,000 right off the sale room floor. I almost had Joe in that first round. He came out trying to box with me but his arms ain’t the longest things in the world. I hit him on the chin with a jab and a right hand right behind it, boy, and it buckled his knees but I missed my left hook. At the end of the round, Eddie Futch ran in the ring and was cussing at Joe he said “God damn it, didn’t I tell you, you couldn’t get under those skinny suckers punches? He’ll knock your damn brains out. Get on top of him!” And that’s what he did. That bell rang, man here he come, like one of them big Sherman tanks. He just turned the lights out on me. Now HE could punch. They say I got up, but I don’t remember getting up.

R.A.: How come so many great light heavyweights like you and Archie Moore just couldn’t pull it off at heavyweight?

R.A.: So you think you’d be heavyweight champion if you were fighting guys like John Ruiz?

Foster: Oh Lord have mercy, John Ruiz? (Laughs) I would’ve destroyed that boy. I was looking for Roy Jones to knock him out but he didn’t. I would’ve knocked Ruiz out. Easy.


R.A.: Out of all the fighters you fought who got you the most pissed off? Was it Vicente Rondon?

Foster: Yeah, when I fought Rondon, he’d run around talking about (funny accent) “Me champee-yone, me champee-yone,” and I said “Yeah, we’ll see who the real champion is tonight.” I had the WBC title and he had the WBA (belt), (but) he beat one of my sparring partners for it. I hit him with a double left hook and I fractured his skull in two places.

R.A.: As hard as you hit, were you ever scared to hurt anybody?

R.A.: Being world champion in the ’70s, was there a wild side to Bob foster? Any wild nights in Vegas? Partying? Ladies?

Foster: You know, in those days women liked to be seen with the champion. We all used to party after the fights. I used to give big parties in my suite at Ceasars Palace. You know we just invite all the showgirls and party. (Laughs.) I can’t get into the details, but we had beautiful women at every party.

R.A.: I read about some heavyweight fight you had in San Francisco that’s not on record for some reason. It lasted only 17 seconds.

Foster: Oh Yeah, I can’t even think of that guy’s name. He was a cruiserweight, but they didn’t have cruiserweights in them days, you was either light heavy or heavyweight. The bell for the first round I went out and hit him on the chin with a right hand, lifted him clear up off his feet and blood shot out of both his ears. That’s how hard I hit him. I don’t know why that’s not in the record book.

Foster: probably around ’64, ’65. I hit him with a right hand but I also had a left jab like the average fighter’s best punch. I used to train with a one-pound weight in my hand. I ran with it, I hit the bag with it, and I kept that one-pound weight. Right now my left shoulder is bigger than my right shoulder. And I can still punch.

R.A.: How did you know when it was time to finally hang up the gloves?

Foster: Well, I didn’t want to wind up like Ali walking on my damn heels, not knowing where I am half the time. So I just hung it up. I had my fun. Everybody’s got to go. You can’t stay in there forever. (George) Foreman was talking ’bout he wanna go back in there. Foreman’s a damn fool.

R.A.: So after being world champion for all those years you became a lawman, a deputy sheriff, down in New Mexico. That’s a serious transition.

Foster: One thing my mother always taught me, she said I don’t care what you become in this world, you always keeps yourself a job.

And it was fun, I always wanted to be a cop. 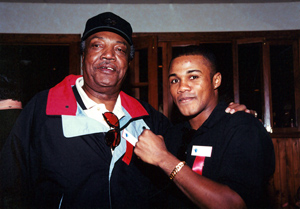 R.A.: Who are some fighters you enjoyed watching after you retired?

Foster: James Toney. He got my style. I don’t know where he got it from, but I like his style, where he got his left hand low, hiding behind his shoulder. He was classy. That kid from Puerto Rico, (Felix) Trinidad, I liked to see him fight. The best fighter I think was out there was the Russian kid, Kostya Tszyu. Man, that sucker could punch. Man, when he hit Zab Judah on the chin (laughs hysterically). Zab didn’t even know he was knocked out. (Laughing) The guy starts choking the referee (laughs). Kostya Tszyu. Man, that sucker was bad.

R.A. The Rugged Man is a rapper, filmmaker and journalist. Check out his latest album Legends Never Die, on sale now. Follow him on Twitter @RAtheRuggedMan, visit his Facebook page: http://www.facebook.com/pages/RA-The-Rugged-Man-Official-Page/180800567216, and official website: http://ratheruggedman.net/