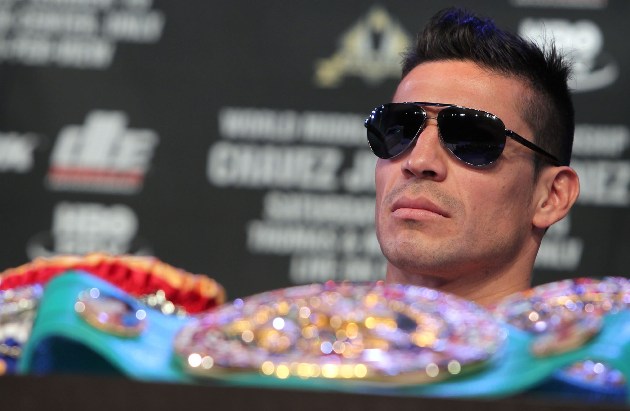 When RING and WBC middleweight champion Sergio Martinez meets rival Martin Murray in Buenos Aires on Saturday, he will be looking to add to what has become a spectacular legacy.

Over the course of his past eight fights, Martinez (50-2-2, 28 knockouts) is 6-1-1 with four knockouts against the likes of Kelly Pavlik, Paul Williams, Sergei Dzinziruk, Matthew Macklin, Darren Barker and Julio Cesar Chavez Jr., three of whom were undefeated before meeting Martinez.

Seven of those bouts are featured in a recent HBO video.

“Sergio Martinez is an idol,” said Sampson Lewkowicz, Martinez’s advisor. “Hopefully, we will continue for one more year, because Sergio promised his father that he would not fight at the age of 40.”

Against Murray (25-0-1, 11 KOs), Martinez, who turned 38 in February, will return to the ring for the first time since September’s unanimous decision victory over Chavez (46-1-1, 32 KOs), whom he dominated for 11 rounds before overcoming a dramatic 12th-round knockdown.

“First of all, you can look at that 6-1-1 and it pretty easily could be 8-0, because I thought he beat Paul Williams the first time (Martinez lost by majority decision), and he certainly beat Kermit Cintron (the fight was scored a majority draw). And, I think that people are getting a treat in getting to see him. I thank HBO, because all of his fights since Alex Bunema have been televised by HBO,” said DiBella., referring to an an eighth-round stoppage of Bunema in October of 2008.

“You’re getting a chance to see a Hall of Fame Fighter, and, in my mind, one of the best middleweights who ever lived, and one of the two greatest middleweights in the history of Argentina, and you can mention them in the same breath at this point. You can mention Sergio Martinez in the same sentence as Carlos Monzon, and you’re not doing any injustice to Carlos Monzon. That’s how great Sergio Martinez is.”

Former undisputed middleweight champion Kelly Pavlik, former two-time welterweight titleholder Paul Williams and top contender Matthew Macklin were all left with badly bleeding faces after losing to Martinez, with Williams being stopped in the second round and Macklin, in the 11th after being dropped twice.

“I think that among the people who know, they know that they’re getting a chance to see an all-time great fighter and a future Hall of Famer,” said DiBella.

“Does he get the credit he’s due? Maybe not. But it’s coming more and more, and on Saturday night, in his homeland, there will be 40,000-plus people filling the stadium, showing him the love and the respect that he deserves.”

“Basically, I feel like respect is earned. I was once in a similar situation as Murray is now. You have to earn your respect in this game,” said Martinez.