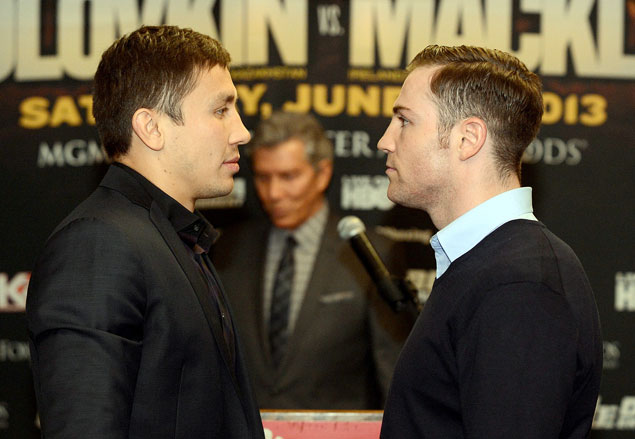 NEW YORK – Matthew Macklin knows he is the toughest test of Gennady Golovkin’s career and you’d be hard-pressed to find anyone who disagrees.

On Saturday at Gallagher’s Steakhouse, the HBO middleweight championship fight was formally announced for June 29 at the Foxwoods Casino in Mashantucket, Conn.

“We don’t believe that there’s going to be any loser come June 29,” said HBO Sports Director of Programming Peter Nelson. “These are two special action fighters. Everyone understood the magnitude of this event coming together at this stage of the careers and their development on HBO.

“It’s a big privilege to us to see the commitment of these two fighters of international statue who choose to call HBO their home, since they can fight anywhere in the world they want.”

Golovkin (26-0, 23 knockouts) made his HBO debut last September, with a rousing stoppage of Grzegorz Proksa. He followed up with a stoppage of Gabe Rosado on HBO in Jan., and has kept busy with a stoppage win over durable Nobuhiro Ishida, the first stoppage loss of Ishida’s 13-year career.

But in Macklin, who has twice challenged for the middleweight title – a controversial decision loss to Felix Sturm and a stoppage loss to Sergio Martinez – Golovkin is facing a caliber of fighter he has yet to meet in the ring.

“We have a very difficult fight for us; very big fight for us,” said Golovkin, whose 88 percentage knockout ratio is the highest among active titleholders. “(Macklin has the) same size, same power, same speed as me. The Sergio fight was very close. This is a very good fight for us.”

Macklin’s promoter Lou DiBella, a former executive at HBO Sports who was largely responsible for the excellent matchups on the Boxing After Dark series, believes this has the making of an excellent TV fight.

“This is a fight that can’t miss. ‘Triple G’ will mix it up, he’ll rumble, but if you want to make it a fight, you have to go after him,” said DiBella, who promotes RING middleweight champion Sergio Martinez. “Matthew is unquestionably the biggest, hardest fighter Golovkin has ever fought. And Macklin is going to make him fight. You really can’t make a better matchup in the middleweight division.”

Golovkin’s promoter Tom Loeffler, Director of K2 Promotions, says that it’s been harder to find fights for Golovkin than it has been matchups for the Klitschkos. He says the recognized titleholders don’t want to fight him, thus preventing Golovkin, 30, from proving himself.

“The only way to show it in the ring is to get the other middleweights who are also considered great to fight him,” Loeffler said. “We believe in the quality of this matchup and the excellence of the styles there are going to mesh in the ring on June 29.”

Macklin (29-4, 20 knockouts) has already come up twice in title efforts, but he believes the third time is the charm and expects to shock the world on June 29.

“I believe he will achieve everything he’s supposed to, but he’s going to lose first and he will become a better fighter because of it,” said Macklin, 30. “I’m by far the biggest puncher he’s fought; something in his mind, something in my mind. It’ll be a big factor in the fight. He’s not going to be able to just walk in on me like he did against other opponents.”