Zou back on July 27; Arum to sign Penalosas; Donaire-JuanMa next?

NEW YORK — Top Rank CEO Bob Arum tells RingTV.com that he is planning a second card in the Chinese region of Macau on July 27, which will be headlined by the second professional bout of two-time Olympic gold medalist Zou Shiming. 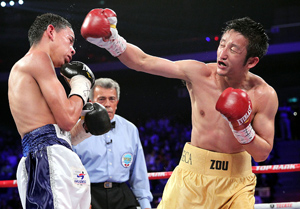 The first card, which featured Zou’s successful debut last Saturday with a four-round decision over Eleazar Valenzuela was an overwhelming success in China, where a reported 300 million homes tuned in to watch their countryman in action.

Melindo, 25, is promoted by Filipino outlet ALA Promotions, and has been the mandatory challenger for the WBO belt for close to a year.

While cementing the Las Vegas-based Top Rank’s foothold in the booming casino industry in Asia, the Macau cards also serve as dry-runs for future cards featuring their more established Asian boxing stars like Manny Pacquiao, whom Arum says will likely fight in either Macau or Singapore in September, and Nonito Donaire Jr., THE RING’s junior featherweight champion who will face Guillermo Rigondeaux this Saturday.

Arum says he intends to finalize an opponent for Pacquiao “in the next few days,” while not committing verbally to a fifth clash between Pacquiao or Juan Manuel Marquez, who knocked out Pacquiao in six rounds last December. Arum repeated that he is looking to stage the fight against an opponent to be named in either Macau or Singapore

“I’m not set on anybody,” said Arum. “We’re gonna come to a decision in the next few days to see who Manny will fight now that we’re pretty well set on the venue and go from there.”

Arum did however let the cat out of the bag about a possible fight between Donaire (31-1, 20 KOs) and Puerto Rico’s Juan Manuel Lopez (32-2, 29 KOs) some time around September. Arum said that he believes Lopez has verbally committed to the bout, should Donaire get by Rigondeaux.

“Juanma is a big attraction in Puerto Rico. For me it’s an exciting fight to watch. Juanma has a tremendous punch and it’s just a fight I’d like to see. That’s why I’m excited about it,” rationalized Arum.

Arum is also looking into staging major fights in the Philippines, where four major casinos in the Manila Bay area are either under construction or recently opened.

“With the success we’ve had in Macau, I’m sure when we do fights in Singapore, they’ll be successful,” said Arum. “Don’t forget in the Philippines, there’s gonna be this tremendous casino complex in Manila Bay where they’re building four major casino properties. So I think we’ll be seeing some big fights in the Philippines.”

Arum said he is planning to put four Filipino boxers on the July 27 card, which may include the Penalosa Brothers Dodie Boy Jr. (11-0, 11 KOs) and Dave (6-0, 4 KOs), both of Cebu City, Philippines. Both prospects, who are the sons of former champion Dodie Boy Penalosa Sr. and nephews of former champion Gerry Penalosa, scored knockouts on the April 6 card, prompting Arum to announce his intentions to sign them to promotional contracts.

“If we can reach an agreement, it’s a big help for my nephews’ careers,” said Gerry Penalosa, the two fighters’ manager. “Top Rank is a maker of superstar boxers.”