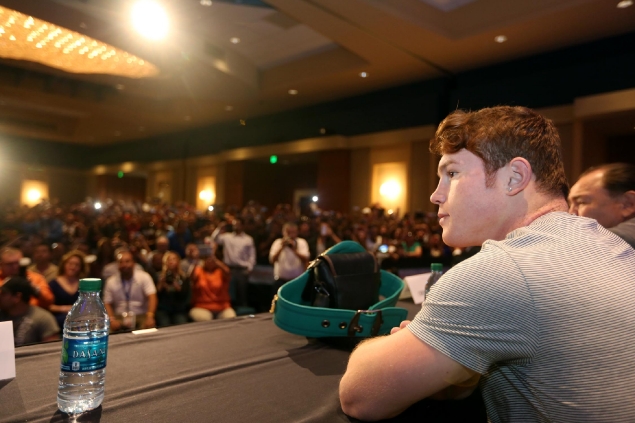 On April 20, the 22-year-old Alvarez will take his own budding status as a Mexican icon into the same arena when he faces Austin Trout in a Showtime-televised clash that will also be for the vacant RING 154-pound belt.

“I’m very honored to be included and compared to those fights, and to have the opportunity to fight in such a historic place. That’s what motivates me even more, and to be fighting in front of so many Mexicans. I’m very happy. I’m very honored,” said Alvarez, who has watched replays of Whitaker-Chavez.

“I’m very proud, and we want to show that we belong here. It’s a big responsibility. It is a very similar fight. I’ve watched it on video several times, and Austin Trout, like Pernell Whitaker, is a southpaw and slick and a difficult fighter, but that’s what we’re training hard for. Come April 20, the night of the fight, we’re going to make it where it’s not so difficult for us.”

Golden Boy President Oscar De La Hoya is picking Alvarez (41-0-1, 30 knockouts) to defeat Trout (26-0, 14 KOs) in a clash he believes will rival the intensity and atmophere of Whitaker-Chavez.

“I compared this event to a lot of past fights that took place,” said De La Hoya, who twice stopped Chavez and decisioned Whitaker. “When I fought Fernando Vargas, it was important to me as a fighter to convince people that I was the real deal. When I fought Ike Quartey, those types of fights convinced people that I could fight.”

“Even when Chavez fought Pernell Whitaker, the magnitude of the event in San Antonio was like no other. That put boxing on the map in San Antonio. All of those three fights I just mentioned, Canelo, right now, is in that same position. He’s going to put boxing back on the map in San Antonio with well over 35,000 tickets sold. This fight is going to define Canelo. If everything goes well, this fight will take him over the top and will get the respect from the critics who don’t believe.”

Like Alvarez, Trout, 27, has memories of Whitaker-Chavez, which matched a left-handed African American boxer against a Mexican hero.

“I do see very similar comparisons. First of all, Sweet Pea is one of my favorite fighters, but the difference between me and Sweet Pea is that I can punch a bit,” said Trout.

“There are things that he could have done in that fight that could have made it a lot less close and to pull away from Chavez. So the best way to not allow history to repeat itself is to know your history. So, yeah, I have definitely watched the fight. Chavez is not Canelo, and I’m not Sweet Pea, but there are very similar comparisons.” 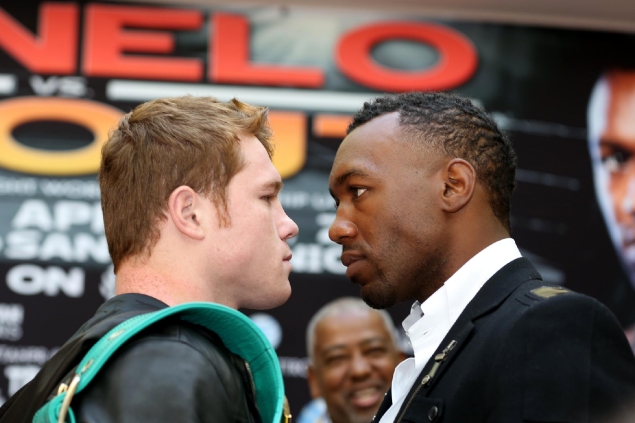 In the event that Trout is successful, there is a contractually-based rematch clause giving Alvarez the option of a return bout.

“Obviously, if you want to be the best, you have to fight the best, and I had the privilege of fighting the very best, which, obviously a lot of people appreciated. But this is no different. Canelo, at the young age of 22, is already going to fight the best,” said Oscar De La Hoya, president of Golden Boy.

“The rematch clause is obviously, depending on whatever happens in the fight, if it’s a great fight, then let’s do it again. Why not. That’s the way we see it. Canelo winning, Austin winning, it being a draw, if it’s going to be a great fight then why not do it again?”

“It’s something that I respect, and it depends on the outcome of the fight,” said Alvarez. “But like Oscar mentioned, if it’s a great fight and the fans want to see it, then, yeah, we’ll consider it. Definitely.”

Trout pointed out that the rematch clause favors Alvarez, and not him.

“When I win, the clause will be in effect. But if he wins, they’ll go about their business,” said Trout. “It just shows, to me, a lack of confidence in their fighter. My team believes in me 100 percent against anybody.”

Whitaker’s fight ended in controversy, when many believed he had handed Chavez his first loss in 88 bouts.

“It does [worry me] a little bit. Texas is WBC country, but I can’t focus on that. I can’t use any energy to draw on things that I can’t control. I can only control what I do in the ring. We don’t want to go out of the game plan,” said Trout.

“We don’t want to break character or force something that’s not there. We’re going to stick to our guns and do our best. If it goes to the judges, then, you know, it’s really in God’s hands. If the judges want to jerk me, that’s between them and God and they’ll have to answer for that later.”

The referee for Alvarez-Trout will be Laurence Cole, with the judges being Stanley Christodoulou of South Africa, Rey Danseco of the Philippines and Javier Alvarez of Texas, according to Cole, who informed RingTV.com that he officiated Trout’s unanimous decision over Taronze Washington in November of 2009, and never has worked any of Alvarez’s fights.