Garcia: Judah’s ‘just another guy in my way’ 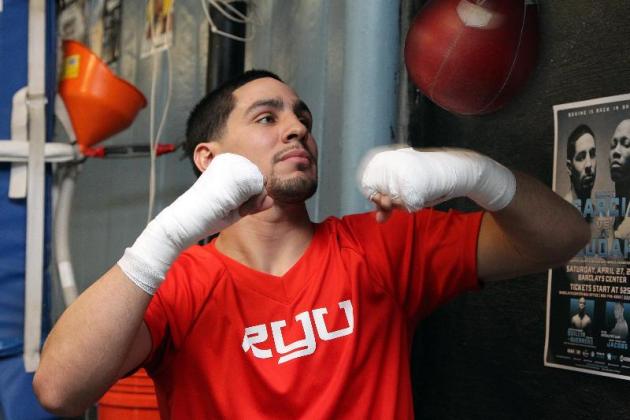 In October, Philadelphia’s Danny Garcia thrilled a packed house when he knocked out Mexican legend Erik Morales in the fourth round to defend his RING, WBA and WBC junior welterweight belts.

The triumph headlined the first-ever boxing event at Barclays Center in Brooklyn, represented Garcia’s second win over Morales, whom he had decisioned for the WBC version of his titles in March of 2012, and also took place with former 140-pound titleholder and welterweight champ Zab Judah — a Las Vegas-based Brooklyn native — watching from ringside.

“Zab is from Brooklyn, but I’m the hometown guy,” said Garcia during a recent workout overseen by his uncle and trainer, Angel Garcia. “I was in New York City a few weeks ago, and a lot of people told me they are rooting for me. I know the crowd is going to be for me that night. I’m the champ.”

“I feel like I’m hungrier now than ever. Everyone wants what I have. I have to always be on my ‘A game.’ If you think like a champion, act like a champion and walk like a champion, you are a champion. I’m not really concerned about anything that Judah will do in the fight. I know I’m going to be at 110 percent and in perfect shape.”

Garcia-Judah was postponed from its original date of Feb. 9 due to a rib injury suffered by Garcia, which the boxer said has since healed.

“I got hurt sparring. Boxing is a contact sport,” said Danny Garcia. “It’s my first injury ever as a professional. I feel like there shouldn’t be any questions. My team and I made the right decision.”

Morales represented the fifth consecutive bout against a current or former world titleholder for Garcia, a 25-year-old boxer-puncher who owns decisions over ex-beltholders Nate Campbell and Kendall Holt from April and October of 2011, respectively, and who collected the WBA’s belt with a fourth-round stoppage of Amir Khan in July of last year.

“Zab is just another guy in my way. They all say the same thing. They think they’re going to beat me until we get into that ring. Until they get hit. Everything is going solid. This is one of my most solid camps,” said Garcia.

“I’m running and sparring and looking sharper every day. We’re running a perfect schedule. I’ve fought tons of southpaws in the amateurs and in the pros. It’s easier for me because I can land my hard left hand and hard left hook.”

Once the RING, WBA, WBC and IBF welterweight titleholder as well as the WBO and IBF junior welterweight beltholder, Judah was last in the ring in March 2012, when he stopped previously unbeaten Vernon Paris in the ninth round to rebound from a fifth-round stoppage loss to Khan in July of 2011.

Judah also owns a disputed split-decision win over Lucas Matthysse from November of 2010. His past losses were to the likes of Joshua Clottey, Kostya Tszyu, Miguel Cotto, Carlos Baldomir, Cory Spinks and Floyd Mayweather Jr., with most of the setbacks taking place in the welterweight division.

Judah was 22 and undefeated when he captured his first crown, the vacant IBF junior welterweight title, with a fourth-round stoppage of Jan Bergman in February of 2000.

He defended that belt five times, with four knockouts, before being dethroned via second-round stoppage against Tszyu in November of 2001.

Judah regained the belt with a seventh-round stoppage of Kaizer Mabuza in March of 2011 but lost it again to Khan.

Angel Garcia said Judah will fare no better against his son.

“The truth hurts. Zab Judah fought Vernon Paris a year ago. Paris gave him nine rounds. Zab had his day. This is a new era of fighting. This is the Danny Swift era. He is the champion of the world,” said Angel Garcia.

“I train him, he fights them and [advisor] Al Haymon picks them. At 140 pounds, no one can beat the champ. People say Danny is a basic fighter, but come on. He is the champion of the world.”