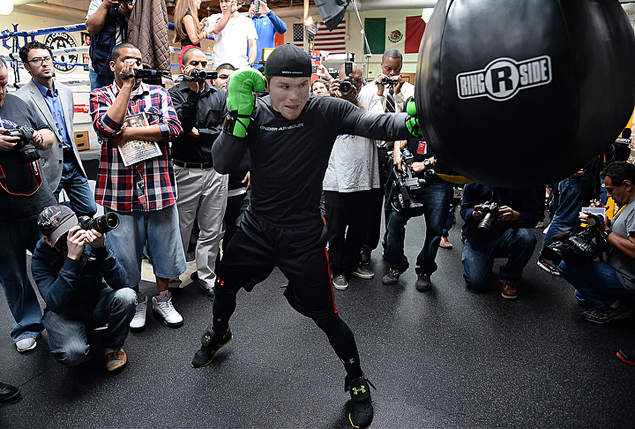 WBC junior middleweight titleholder Saul “Canelo” Alvarez has worked with middleweights Lester Gonzalez and Alex Theran, as well as unbeaten junior middleweight Hugo Centeno in advance of his April 20 clash with Austin Trout at The Alamodome in San Antonio, which will be broadcast on Showtime.

Theran and Gonzalez are, like Trout, natural left-handers, while Centeno, the main workout partner for Alvarez as recently as Wednesday, is an orthodox fighter who has been facing Alvarez out of the southpaw stance, according to Golden Boy translator Ramiro Gonzalez.

With a mark of 18-0 that includes nine knockouts, the 22-year-old Centeno, of Oxnard, Calif., is coming off last month’s unanimous decision victory over KeAndrae Leatherwood.

Theran, a Colombian who is also 22, is 11-0 with eight knockouts, including stoppages in his past four fights. His most recent was a fourth-round knockout of Michael Balasi last month.

Alvarez has been training for eight weeks of an expected 10. He started out in Guadalajara, Mexico, in the Julian Magdaleno Gym, but is currently in the Wild Card West facilty in Santa Monica, Calif.

On Wednesday, Alvarez “did his strong session of sparring with three great southpaws,” said Ramiro Gonzalez.
“Hugo Centeno, he’s an orthodox fighter, but in order to help, he turned left-hander. Along with Lester Gonzalez and Alex Theran, he has been doing 86 rounds of sparring until now. Four minutes of action with 50 seconds of resting.”

Gonzalez also said that he expects several of Alvarez’s family members to be ringside for the fight against Trout, including his father, Santos ├ülvarez, mother, Ana Mar├¡a Barrag├ín, and two brothers, Ricardo and Victor ├ülvarez.

Leatherwood (12-2-1, 8 KOs) has been added to the undercard of the Alvarez-Trout card and will face Philadelphia’s Julian Williams (11-0-1, 6 KOs) in an attempt to rebound from the loss to Centeno.

“I’ve regrouped, and I know what I have to focus on in order to produce the best possible performances. My opponent is a talented guy. But I haven’t even hit my peak yet, and my best boxing is still to come,” said Leatherwood, 24, who is nicknamed “Lightning.”

“I know what I’m capable of, and I think the boxing world will take notice once they see me put it all together. I know that the atmosphere will be off the charts. It’s going to be a great night for boxing. I’m going to win over some of those Latin fans, and they will leave the arena that night wanting to see me again.”

Puerto Rican welterweight prospect Thomas Dulorme (17-1, 13 KOs) will pursue his second straight stoppage victory against Ghana’s Ben Ankrah (17-12, 8 KOs) on Saturday night in Carolina, Puerto Rico, in a clash that will be televised on DirectTV’s “Night of Champions DIRECTV.”

“We are back in Carolina, with great fights from start to finish,” said Javier Bustillo, president of Universal Promotion. “Dulorme’s rival had changed, but Ankrah is stronger and is very motivated.”

Dulorme’s last fight was a first-round knockout victory over Eddie Brooks, which was his first outing since October’s seventh-round stoppage loss to Luis Carlos Abregu.

“We have done a great job,” said Dulorme. “We are working on this new opponent, focused on what we do in the ring, and are fully aware with the type of rival we have for this Saturday. I’m ready to fight and to make a statement by knocking him out. I have big plans.”

Standing just 6-3, Cunningham, 36, will have a massive task in Fury, 24, who will make his American debut as part of his quest to stake his claim as the heir apparent to RING, IBF, WBA and WBO champion Wladimir Klitschko and his older brother, WBC titleholder Vitali Klitschko.

“We’re getting ready for the best Tyson Fury that the world has ever seen. He can say what he wants to say. It’s only going to make him look bad when he gets beaten by a supposed light heavyweight,” said Cunningham.

Featherweight prospect Joel Diaz Jr. (12-0, 11 KOs), of Palmdale, Calif., scored his 10th straight knockout in the fifth round on Thursday night against Victor Sanchez (4-6-1, 1 KO), at the Bayou Event Center in Houston.

“After being out of the ring for a few months I was really eager to let my hands go tonight,” said Diaz, who was in the ring for the first time since scoring a second-round stoppage of Guillermo Sanchez in August of last year.

“[Victor] Sanchez was a very tough fighter, and I give him a lot of credit going five tough rounds with me. He showed a lot of heart, but I wasn’t going to be denied tonight. I’m ready to take my career to the next level. My promoter, Boxing 360, has big plans for me in 2013, and I can’t wait to get back in the ring.”

Like Leatherwood, Diaz is promoted by Mario Yagobi of Boxing 360.

“Right now, Joel Diaz Jr. is the hottest prospect in the world of boxing. Every time he fights, the fans rave of his performance, style and punching power,” said Yagobi.

“He’s getting better with each fight because he’s dedicated to the sport. I’m working on getting right back in the ring next week if things go as planned. The sky is the limit for this kid and I’m excited about his future.”

A Liberia native, Kahn-Clary moved to to Providence 14 years ago, and is coming off February’s second-round technical knockout of 18-fight veteran Pablo Cupul.

“This fight is a real big opportunity for me, so I need to put on my best performance to prove I’m a good prospect, and that I will be one of the best fighters in the world someday,” said Khan-Clary.

“To fight on the same card as Donaire and Rigondeaux, being involved in only the second boxing show ever at Radio City Music Hall, for me is an honor. I have to fight to the best of my ability…I’m competitive and even though we’re friends, I want to look better than him that night.”

Promoted by Bob Arum’s Top Rank, Kahn-Clary was a standout amateur who captured a gold medal at the 2010 U.S. National Golden Gloves Tournament. He fights out of the new Manfredo Boxing Sports Fitness gym in Narragansett, Rhode Island.