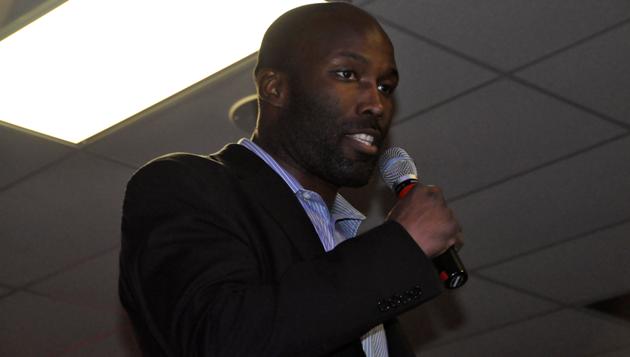 A native of St. Catherine, Jamaica, July endured the death of his father, Venry, on Jan. 18.

And then, last month, July took a record of 13-0-2 that included six knockouts into the biggest fight of his career only to be stopped in the third round of a clash with Elvin Sanchez (6-2-1, 5 KOs), of Paterson, N.J.

All appeared to be going right until about two hours prior to the show’s scheduled 7 p.m. start when July and his organizers realized that they had not secured gloves for any of the participants.

“At around 4:30, we’re like, ‘We don’t have gloves.’ I nearly had a heart attack. So we called up all of these people. Everybody that we knew. I called [event matchmaker] Chris Middendorf, but he didn’t have enough gloves for everybody,” said July, whose card took place at on Jefferson Street in Frederick.

“Now, eventually, we had enough for all of the fighters. We eventually had 14 gloves, but if one would have burst or something like that, well, we might have been into some real trouble. I mean, basically, we avoided was a catastrophe.”

But by the time the show ended at approximately 11 p.m., July’s fright night had transformed into a legitimate fight night.

For July was basking in the afterglow of an event that he described as “a complete success.”

“The crowd was loud, the fights were fantastic, so it was great. This was fantastic. The venue was crucial. This venue had a capacity of 590, so it’s small enough to where it’s very intimate, but it’s big enough where you can pack people in here,” said July. 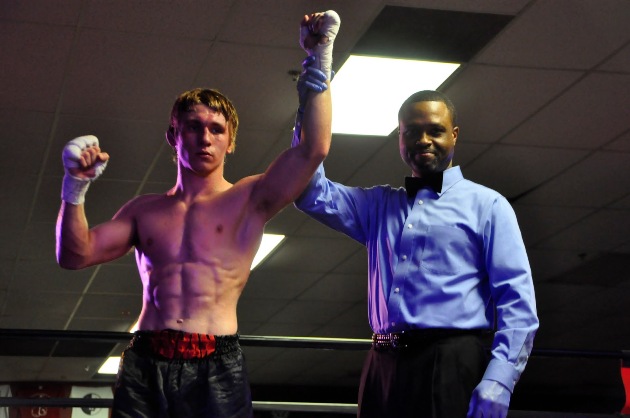 Among the winners on Saturday night were Frederick-based, 18-year-old junior middleweights Devar Ferhadi (2-0, 2 KOs), and, Dillon Haymon (4-0, 2 KOs), who emerged from their action-packed fights with a third-round technical knockout and a majority decision victory, respectively, to delight of their screaming, partisan fans who packed the pulsating fitness center.

“I knew Dillon and Devar could punch, and they came to give a punch and take a punch. So this is what these guys needed,” said July. “I told all of the guys that they would get better as a result of these fights, so these fighters are going to develop. Now Dillon and Devar know what they can do.”

JULY: ‘I WENT INTO DARKNESS’

An attorney in Baltimore, July is trained by Adrian Davis, who once guided Hasim Rahman to an upset fifth-round knockout that dethroned Lennox Lewis as undisputed heavyweight champion of the world in April of 2001.

But last month, on the undercard of an an eighth-round knockout victory by IBF junior welterweight beltholder Lamont Peterson over of ex-titleholder Kendall Holt at The D.C. Armory in his Washington, D.C., July’s biggest career moment became one of his worst nightmares. 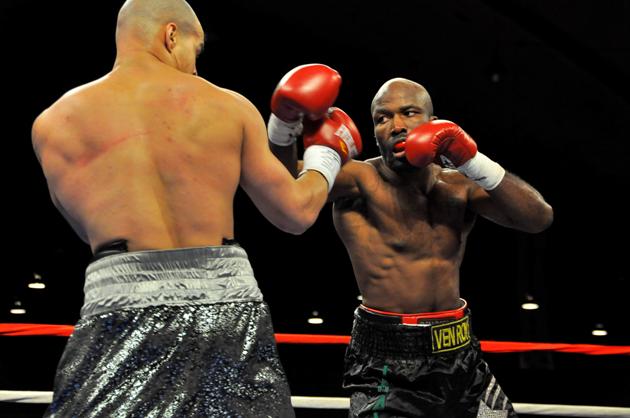 In a shocker, Sanchez rose from a second-round knockdown before flooring and finishing off July at 2:55 of the third round. July rose on unsteady legs, and, despite his own protesting, referee Malik Waleed called a halt to the fight.

“When I lost my first match, I went into the darkness. I didn’t want to talk to anybody. I was depressed, you know, because I had worked really hard. For a week, I actually wasn’t feeling good. It was around the time that my father had passed, so it was a lot of things that were going on. He passed a month before my last fight on Jan. 18,” said July.

“So you have to think about all of that when you fight. Honestly, in retrospect, I think that I had too much going on when I had this fight. I was already thinking about this show. At the arena, somebody came up to me and I had a 20-minute conversation with them about how I was going to work with them and get them on this show. That’s not something that I should have been thinking about.”

Eventually, however, July was able to refocus on his initial endeavor as a promoter, to the benefit of the Frederick community.

FERHADI: ‘THE ATMOSPHERE WAS ELECTRIC’ 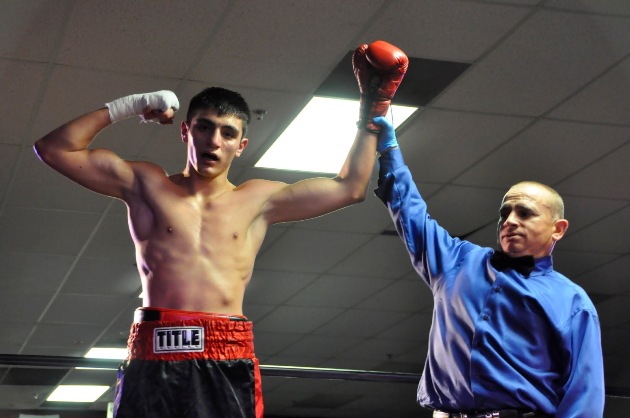 Jason Bakanowkski, of Northboro, Mass., was impressive in his professional debut against Ferhadi, with whom he traded blow-for-blow before Ferhadi’s potent left hook made the difference.

Near the end, Bakanowski wobbled backward, yet again, from a brutal series of punches, prompting referee Kenny Chevalier to step in and halt the fight at 1:29 of the third.

“Tonight, the atmosphere was electric. It was much more warm and friendly because they’re my people, right here. This was special. When I heard all of my friends and family screaming out support for me, I became more energetic,” said Ferhadi, a 6-foot-1 prospect who was born in Northern Iraq.

“I always feel like it is my responsibility to leave it all in the ring, so this was like a dream come true. To be fighting in here where I belong, and where all of my friends and family are, and to be able to continue my winning streak was really great. I hope that in five years, I’m able to say that everyone remembered me fighting. I really think that this is the start of a lot of things for me and for Frederick.”

Nicknamed “The Stalker,” Hayman entered the arena for his main event opposite Stanley Harvey, of San Diego, wearing a dark, hooded robe and with the lights of the entire venue flickering on and off for maximum effect.

So with his mother, Jean, watching anxiously from ringside, Hayman weathered the storm early against Harvey (1-4, 1 KO), who repeatedly whacked shots to the temple around the local fighter’s highly-held guard.

“It’s a total rush emotionally. There are so many emotions that go through me,” said Jean Hayman, a math teacher at Clarksburgh High where Haymon went to school.

“I’m proud of him. I know how hard he works, but I was worried that something would go astray. So it’s an emotional rush through my body, and there are a lot of feelings.”

Although his inexperience surfaced — Hayman failed to adhere to Boyer’s repeated requests that he pound the body — the local boxer edured for the win.

“This was his first fight as the main event, and his hometown fans and all of his friends and family were here. So when the guy got him with the right hand, he sort of took it personal and wanted to punish him,” said Boyer.

“Dillon’s inexperience showed, at times. I mean, he’s only 18, but he turned into a fighter tonight. He turned into a man tonight, so just wait until he’s 21. Canelo Alvarez, watch out. You’ll be on your way down.” 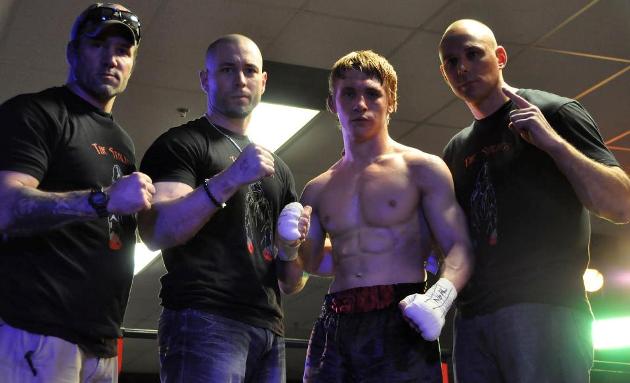 But even Hayman demonstrated the maturity not to get ahead of himself.

“Don’t listen to my trainers. They’re getting a little ahead of themselves,” said Hayman. “They call people out for me all the time. But don’t listen to that — for right now.”

One of July’s most difficult moments of the evening occurred during an exchange with Bakanowski that was followed immediately by another one with his mother, who had traveled from Boston to watch her son.

“Here is a guy who trains with [super middleweight contender] Edwin Rodriguez, and he trains hard every day. But he came up to me and was saying that he was going to quit because he was in a similar situation as me. He’s in corporate finance, and he has an MBA, and yet he’s fighting, so I know how that feels,” said July.

“Why? Because that was what people told me. When you don’t have to do this, but you choose to do this, there is a lot of pressure. I know how that feels, particularly since I lost my last fight. As soon as you lose, everybody is like, ‘He should just focus on being a lawyer.’ That’s what happened to me. Now he’s going through that.”

“He was like, ‘I lost my first fight, so I’m going to quit boxing.’ But I’m like, ‘don’t quit boxing.’ I said, ‘You are a tough kid and you can fight. Whatever happened here, we’ll bring you back and we’ll put you in an even fight,'” said July.

“I said, ‘We’ll give you a fair shot, and if you can’t win that one, then think about it.’ I said, ‘Give yourself a chance.’ I said, ‘Bernard Hopkins lost his first fight.'”

“She said that it should not have been stopped and that her son wasn’t hurt, but dealing with mothers is crazy, so I’m not going to piss anybody’s mother off. So I don’t need to argue with her about that. There is no point. I just said to her, ‘Your son fought a tough fight,'” said July.

“I think I know how a mother would feel, so I’m somewhat empathetic about how a mother would feel. Let’s just say that, as an attorney, there’s the art to the way of words. There is a way to express empathy. But trust me: You don’t ever want to tell a mother that her son was getting beaten up worse than she thinks he was.” 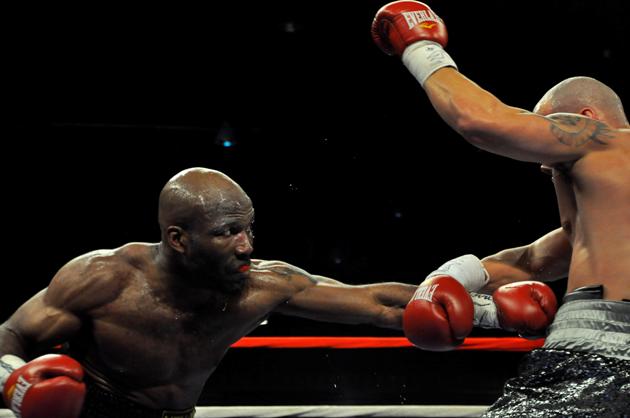 ‘THIS WAS A LEARNING EXPERIENCE’

July believes that he has developed a formula now: Promote first, then fight.

“So we’re just trying to figure out some logistics, but that’s the plan right now. This was a learning experience. There were a lot of things that we did wrong, but now, I know better. We made a lot of mistakes, but we’ll get better the next time. I knew what these guys after sparring with all of these guys. I want to run another show, though, where I just sit back and let the logistics work. I want to run it like clockwork.”