Fans may suffer most from Golden Boy-HBO rift 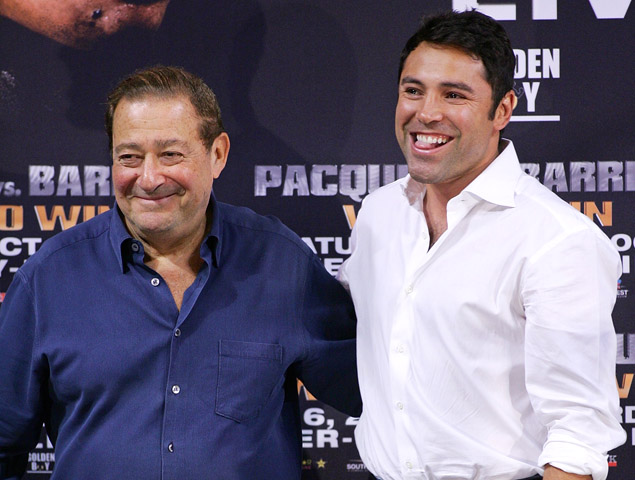 The Cold War between Top Rank and Golden Boy went nuclear with Monday’s news that HBO would no longer be working with Oscar De La Hoya and Richard Schaefer. The decision effectively ends any hope of seeing a fight featuring a Top Rank fighter against a Golden Boy fighter for the foreseeable future.

The battle lines are now drawn: HBO and Top Rank vs. Showtime and Golden Boy.

Who will come out on top? It certainly won’t be the fans. The situation was bad enough when we couldn’t see fights between the promotional outfits with the two deepest stables. Now, other fights aren’t realistic possibilities. Top fighters that aren’t with Top Rank, like Andre Ward, Gennady Golovkin and Sergio Martinez, are aligned with HBO, meaning we won’t see them against Golden Boy fighters. That means no Peter Quillin vs. Martinez, no Quillin against Golovkin. We can also forget about Andre Ward vs. Bernard Hopkins (though Hopkins said he wouldn’t take that fight for “$15 million” anyway) and “Canelo” Alvarez squaring off with Martinez.

Will this rift between HBO and GBP mean more mismatches on HBO and Showtime? Bob Arum certainly has more leverage with HBO now and could wiggle his way to favorable matchups for his top fighters. On the flip side, it could be argued that Arum has no other avenue for his fights considering his soured relationship with Showtime, and may have to put his stars at risk to provide subscriber-friendly entertainment on HBO. He certainly scored big with last weekend’s Fight of the Year candidate between Tim Bradley and Ruslan Provodnikov.

Golden Boy also has far more leverage with Showtime now than they did just last week. Showtime effectively doesn’t have access to Top Rank’s fights (though it’s not clear whose fault that is) and will have to rely on Golden Boy for top programming. Golden Boy has a strong slate coming in April and May, with Alvarez-Trout, Danny Garcia-Zab Judah and Mayweather-Robert Guerrero.

The upside of this decision could mean more offerings like the May 25 show on HBO, which doesn’t feature any fights from either of the two promotional giants. On paper, it’s one of the best shows of the year, a split-site doubleheader with a rematch between Carl Froch and Mikkel Kessler as well as the Canadian superfight featuring Lucian Bute and Jean Pascal.

It could also mean the return of heavyweights on HBO, a division spurned by the network in recent years. The decision also opens up money and dates for the smaller weight classes, which would be a welcome addition to the network. It’s rare that you see a fight on HBO below 118 pounds.

We won’t know for a while how this decision truly affects the industry; dates for the second half of the year still aren’t set. But if the renewed competition motivates both networks to put on the very best fights possible, the second half of 2013 could be one to remember. Time will tell.

Roy Jones Jr. replied: “It’s the best thing that could have happened to him because this kid he’s fighting is a very big welterweight. It allows him to be able to pick up more weight now after the weigh-in.” 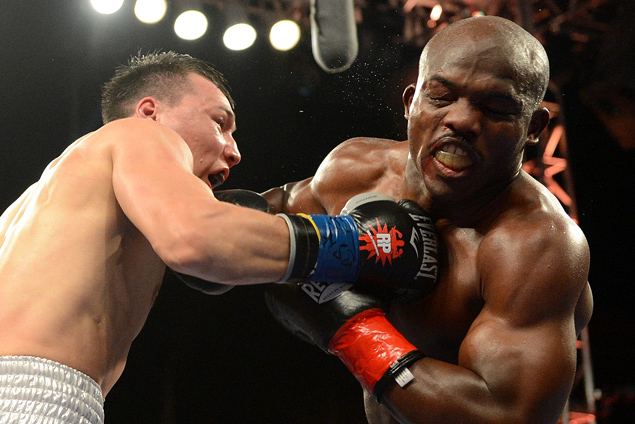 Umm, what? Since when is putting on weight a good thing? Not sure that makes you a stronger fighter. Roy is a future Hall of Famer, but that’s just a baffling thing to say.

But that wasn’t all.

He also stated that Bradley wasn’t hurt on several occasions when he was stumbling around the ring. It wasn’t Jones’ best effort and I thought Andre Ward turned in a far stronger performance on commentary just one week earlier on the Hopkins-Cloud telecast.