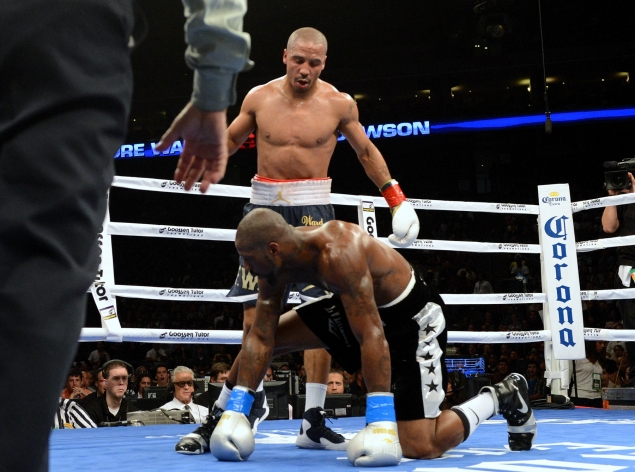 RING, WBA and WBC super middleweight champion Andre Ward, who successfully underwent surgery on Jan. 4 to repair his injured right shoulder, returned to the gym for light training last week after receiving clearance to do so from his physician.

Click here for a video of Ward’s initial workout session.

The injury to Ward, 29, forced the cancelation of his scheduled March 2 HBO-televised defense against former undisputed middleweight titleholder Kelly Pavlik.

Ward had felt pain in his right shoulder after throwing a punch at sparring partner Tony Hirsch during training in Ward’s hometown of Oakland. The original MRI revealed a significant amount of swelling and inflammation, but no injury to the rotator cuff.

Ward’s workouts are limited to shadowboxing and cardio exercise for now.

Ward (26-0, 14 knockouts) is coming off an HBO-televised 10th-round knockout of RING and WBC light heavyweight champ Chad Dawson in September, this, after having dethroned Carl Froch last December as WBC 168-pound beltholder by unanimous decision in the finals of Showtime’s Super Six Super Middleweight Classic.