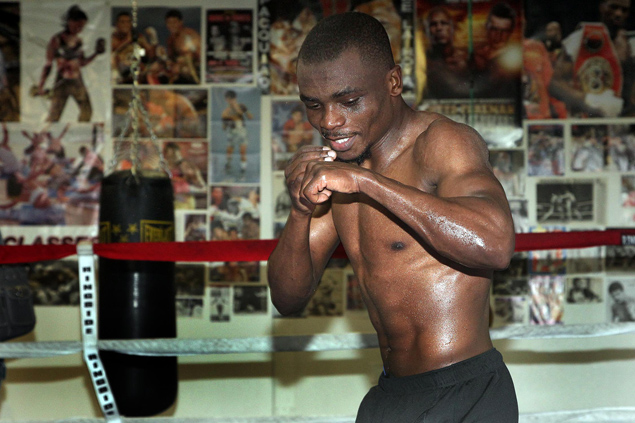 LAS VEGAS – On Saturday night, Sharif Bogere looks to follow in the footsteps of Ike Quartey, Joshua Clottey and Kassim Ouma – fighters who journeyed from impoverished African countries to more lucrative earnings and world titles in the United States – as he vies for his first major title in the headlining bout of Showtime Championship Boxing against Richard Abril for a vacant WBA 135-pound belt.

Where the 24-year-old Ugandan hopes to take a different path from his predecessors comes after he wins Saturday. While all of those names won major titles and found themselves in marquee matchups, their dedication curtailed after their earnings reached a high point.

Quartey took a five-year hiatus after fighting big names like Oscar De La Hoya and Fernando Vargas and Clottey has hardly been seen since appearing in big matchups with box-office darlings Miguel Cotto and, more recently, Manny Pacquiao in 2010.

Ouma, who like Bogere is from Uganda, won a junior middleweight title and unsuccessfully challenged for a middleweight title before falling into gatekeeper status. Ouma had a traumatic upbringing as a child soldier in his native coutnry, and his difficult life was the subject of a 2008 documentary titled “Kassim the Dream.”

“I can’t really comment on what those other fighters did and what motivated them,” Bogere told RingTV.com. “But for me personally, I have goals and dreams that maybe those others did not.

“I’ve been dreaming of this for a long time. My dreams are happening, coming true, but because it is something I dreamed of, it is like I’ve already been there and it isn’t something new. I’m just going to stay positive and make it happen Saturday night, and go from there.”

Bogere (23-0, 15 knockouts) has already displayed a tremendous amount of discipline for a young fighter, having spent the last five years living in Las Vegas while being co-managed by Jimmy Alex, a man who owns the Sapphire Gentleman’s Club. That he’s stayed on the straight and narrow despite the enticements of “Sin City” and his co-manager’s establishment speaks to his character.

Like the previously mentioned fighters, Bogere endured hardship in his native country. As a young kid in Uganda at less than 10 years old, Bogere was often made to fight other kids, and in his words, he beat them all. Through that, he was introduced to the actual sport of boxing and picked it up rather quickly. He then became the captain of the national amateur boxing team before relocating to Chicago in 2007.

THE RING’s No. 7-rated lightweight was able to connect with Alex, who has partnered with co-manager Ralph Heredia to guide Bogere since his professional debut. Not long after arriving in Chicago, Bogere moved to Las Vegas, where he’s lived ever since.

Bogere has already shown discipline in not getting sucked into the kind of lifestyle that often can accompany living in Las Vegas.

“He’s a completely different breed from those other guys,” said Adams, who has pretty much guided Bogere since the beginning of his pro days. “He’s young and he’s more focused and he’s a good kid. He’s very religious, a churchgoer.”

Being that this is Bogere’s first fight on the grand stage, there’s a question of whether or not the hoopla surrounding an event like this brings added pressure. Previously, his biggest fight was a close points win over Raymundo Beltran on ShoBox. This fight carries a different kind of weight, with a true “fight week”, which includes media workouts, a press conference, fighter meetings, and a publicized weigh-in.

Adams, a Hall of Fame-worthy trainer who has guided many a fighter to world titles in the past, thinks very highly of Bogere, who is perhaps the 71-year old trainer’s best opportunity at being involved with a champion again.

Adams livened up Thursday’s press conference when he interrupted Abril’s turn to speak on the dais.

“You can’t win f__king running,” said Adams when Abril’s controversial loss to Brandon Rios from last year was mentioned. Abril tried to continue to speak but was again cut off by Adams.

“You’ve been talking a bunch of stuff on Twitter, I’ve got your Twitter right here,” continued Adams, putting his fists up.

“I don’t mean to be disrespectful, but the first time I saw tape of this guy I said, ‘Is this guy a track star or is he a wrestler?'”

Abril and his team responded by saying they aren’t going to run on Saturday and Abril said he is coming to knock out Bogere, which is exactly what Adams was hoping to hear.

When asked if it was a matter of gamesmanship in order to get Abril to fight in a way that is more conducive to Bogere’s style of fighting, Adams admitted it was part of the reason.

“The b_tch been running all the time, so I wanna see if he’ll stop running,” said Adams after the presser.

“Like I said, I wasn’t sure if he was a track star or a wrestler. That’s why he didn’t get the fight over Rios. You can’t be surprised when you don’t win points by doing all that holding and fighting ugly. He’s an ugly fight. The TV people didn’t even want this fight; we almost didn’t get it because he’s an ugly ass fighter.”

While it is true Abril undoubtedly doesn’t deliver the most crowd-pleasing of styles, it has proven to be rather effective. You’ll have a hard time finding anyone who saw Abril’s fight with Rios last April that felt he didn’t get robbed, and there isn’t anyone out there who has clearly defeated Abril as of yet.

Saturday’s fight is one that was originally expected to take place late last year, but was postponed a number of times due to injuries. Bogere and his team expressed gratitude towards their promoter Golden Boy Promotions for sticking with them and keeping this fight lined up rather than scrapping it altogether after numerous postponements and hangups.

In preparation for the fight, Bogere has been sparring with guys veterans, such as Jorge Linares, a former featherweight  and junior lightweight titlist who is on the rebound. When asked who Bogere would like to fight next if he comes away with a win this weekend, he gave the prepared answer of not looking past his opponent and that his team will have a plan after the win.

“You got [WBO beltholder Ricky] Burns and that kid [IBF titleholder Miguel] Vazquez fighting, and I’m sure Broner will get the winner of that and kick their ass,” he said. “Then, we step up and kick Broner in his ass.”

If Broner does indeed fight the winner of Burns-Vazquez, the more likely scenario is that he moves up to 140 pounds following that fight, win or lose. That would mean that the lightweight division could be wide open for Bogere to claim ownership of.

If Saturday night is a successful one, the sky could be the limit for Bogere. He’s got a crowd-pleasing style and a great story behind him.

Mark Ortega is the boxing columnist for the Martinez News-Gazette and is a member of the Boxing Writers Assoc. of America & RING Ratings Advisory Panel. He can be reached via e-mail at [email protected]and followed via Twitter @MarkEOrtega.