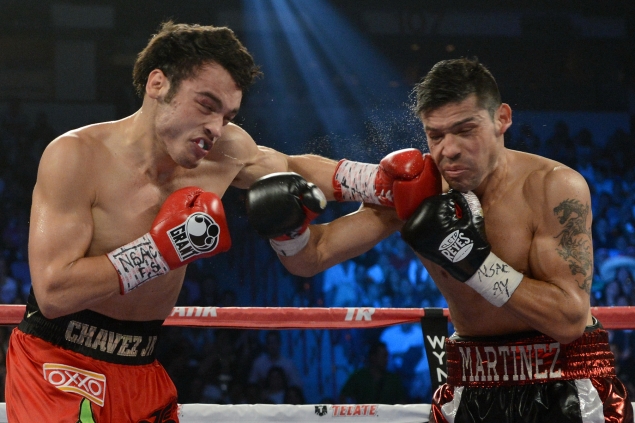 The Nevada State Athletic Commission on Thursday voted 3-2 to fine former WBC middleweight titleholder Julio Cesar Chavez Jr. $900,000 and suspend him for nine months as a result of his testing positive for marijuana metabolites use after of his unanimous decision loss to RING champion Sergio Martinez last September in Las Vegas.

The fine represents 30 percent of Chavez’s $3 million purse and the suspension begins from the date of his fight with Martinez, which means it will end on June 15. Chavez must also produce a clean urine sample to the NSAC prior to his next fight, in accordance with the ruling.

“It’s the second-biggest fine ever in our history, the other being Mike Tyson’s $3 million for biting Evander Holyfield’s ear. The old record for No. 2 was $200,000 against Bernard Hopkins when he pushed Winky Wright at the weigh-in,” said NSAC executive director Keith Kizer.

Although Chavez was not present at the hearing, which took place in Las Vegas, the meeting’s proceedings were translated to him by Top Rank’s Ricardo Jiminez.

Meanwhile, Top Rank CEO Bob Arum, was present along with Chavez’s Vegas-based counsel of Colby Williams and Don Campbell of the Campbell and Williams law firm, whose defense was characterized as “a fair presentation” by one member of the five voting commissioners.

Last month, Chavez’s attorneys requested that the fighter be suspended for no more than six months and fined no more than $10,000.

Arum expressed outrage at the amount of Chavez’s fine.

“We’re happy that he’s going to be back in the ring in June, but the lawyers will handle what appears to be to me and everyone else a crazy and excessive penalty. Everybody is laughing at this thing. Did you ever hear anything so crazy?” asked Arum.

Within a week of falling to Martinez, Chavez (46-1-1, 32 knockouts) claimed “full responsibility for my actions and the consequences thereof” in acknowledging his positive test.

On Thursday, Chavez apologized during his opening statement.

“First of all, I would like to tell everyone that I feel bad about the situation. I know that I committed a big error. It was a mistake and I just want everyone to know that… I know that I let a lot of people down. People that follow me, and it was a big mistake, and it hasn’t been easy for me. I know that it has damaged my reputation,” said Chavez.

“I’m asking for leniency because I would like to fight as soon as I can, but I’m willing to accept anything that you guys have, because, like I said, I’ve made a mistake and I’m willing to take my punishment and the consequences. I would just like to say that I’m a boxer, I prepare myself and I try to do the best that I can.”

Chavez told the commission that, on the suggestion of “a personal friend of mine” from Los Angeles, he had used the marijuana for medicinal reasons “eight or nine days” prior to facing Martinez to relieve stress.

“I would like to apologize to everyone, especially everyone in boxing. I know that this has been a very bad thing for myself, for my career, and there has been a lot of things said about it, my career and my reputation,” said Chavez, during his final comments.

“I would just like to tell everyone that I have never done anything to better myself or to become better  than the other guy. I respect boxing. I’ve been in it a long time. I just want to let everyone know that I can, and that I will continue to do the best that I can, because I love boxing. I love boxing more than ever.”

Throughout his career, Chavez said he “never” had experienced as much stress prior to any other fight as he did before facing Martinez, and that he never had taken used marijuana before any other bout.

“Not just that this was the biggest fight. But also, there was a lot of things going on in my life. It’s just something I did. Big mistake. And I’ll never do it again. I couldn’t tell you myself. I didn’t know what affects it would have on me. I couldn’t tell you. I’m sure that it didn’t help. I wasn’t myself. I was not thinking properly.”

Initially, one of the commissioners suggested that nine months was “on the leniency side” for what amounted to a second offense, given that Chavez had tested positive for a banned diuretic following his unanimous decision victory over Troy Rowland in November, of 2009, at the MGM Grand in Las Vegas.

The member stated that Chavez, at the time of his review, appeared to have displayed “a disrespect” for the process. The result of the Rowland fight was later changed to a “no decision,” Chavez was fined $10,000, and he was suspended for seven months by the NSAC.

Kizer said Chavez’s suspension does not affect his ability to train, meaning that he could, indeed, fight in Las Vegas “any time after June 15.”

“He can train whenever he wants. This is not a medical suspension, so he could have been training at any time over the last five months or so,” said Kizer. “My understanding is that he’s not going to fight until September any way, but he’s free to fight at any time after June 15, as early as June 16.”

Arum had informed RingTV.com in December that he had been hopeful of having Chavez return to the ring in June in Las Vegas.

Since Chavez’s penalty would begin from the date of his last fight — that being Sept. 15, 2012 — Arum’s goal would be possible if Chavez receives a suspension of nine months or less.

“We’re working with HBO on it, so it will be either June 16 or June 22,” said Arum. “We have four opponents that we’re considering.”

Asked if Chavez’s next fight would be in Las Vegas, Arum said, “Of course not,” adding, “He’ll be fighting in Texas or Mexico or some place else.”

Martinez will face unbeaten British contender Martin Murray on April 27 in his native Argentina on HBO with plans to “pursue a rematch” on Sept. 14 against Chavez Jr.

Chavez was associated with either a banned substance or alcohol abuse for at least the third time in his career, having been arrested in January of last year for driving drunk, just a week before his fight with Marco Antonio Rubio in Texas.

Chavez later struck a plea deal in mid-June of last year, which granted him three years of probation and ordered him to to attend 30 Alcoholics Anonymous meetings, the latter of which he already had completed.

In spite of his legal issue, Chavez successfully defended his belt against Rubio in February of last year in San Antonio despite being in relatively bad shape and having to lose a large amount of weight the day before the fight.

Chavez was in much better physical condition for his seventh-round stoppage victory over challenger Andy Lee last June.

In another matter, lightweight prospect Mickey Bey (19-0-1, 10 KOs), of Cleveland, was temporarily suspended for having tested positive for high levels of testosterone in the wake of his third-round knockout of Robert Rodriguez on Feb. 2 at the Cosmopolitan in Las Vegas.

Kizer said Bey’s infraction “indicates the use of synthetic testosterone, which is an anabolic agent,” calling them, “allegations at this point,” during an interview last week.

While Nevada’s rules allow for a maximum testosterone to epitestosterone ratio of six-to-one, Bey’s was greater than 30-to-one, according to Kizer.

“They indicated that they would be ready for a hearing by our next meeting. Our next meeting is on March 19, but if they need more time, then that would be okay,” said Kizer.

“Bey will have his opportunity to respond, and we’ll go from there. If the commission finds against him, he faces a possible or likely suspension, fine and getting the decision overturned into a no-contest.”

In March 2012, IBF junior welterweight beltholder Lamont Peterson failed a drug test that was contractually administered at his choosing by the Voluntary Anti-Doping Association (VADA), coming up dirty for synthetic testosterone.

Peterson’s infraction led to his being stripped of the WBA’s belt he won from Amir Khan. Meanwhile, the IBF declined to strip Peterson after a review of his medical records by IBF-appointed doctors ruled that the testosterone levels discovered in Peterson’s failed drug test were not at a level that would enhance his performance.