NEW YORK – From first glance, you can tell that the man born Charles Bellamy is an experienced, physically strong boxer.

He shoots off a couple punches into the mirror at Brooklyn’s iconic Gleason’s Gym with a rhythm that gives away the fact that he is a New York native. What you wouldn’t be able to surmise from merely observing his training is that this man is the Japanese junior middleweight champion.

“It’s not that I want to be Japanese; I like being an African-American living in Japan,” said the 31-year-old Bellamy, who now lives in Hachioji on the West side of Tokyo, Japan, and fights under the name Charlie Ota. He speaks Japanese, loves anime cartoons and, with a professional record of 21-1 (15 knockouts), Ota has essentially cleared out all of the challengers for his Japanese title. 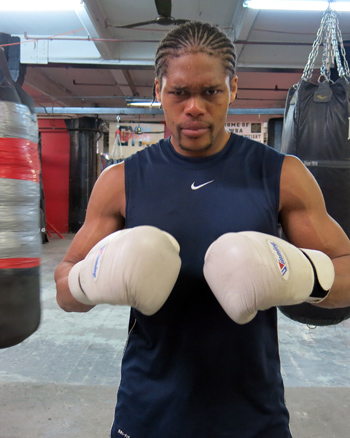 In search of bigger game, Ota returns to action this Thursday when he faces Abel Perry (18-6, 9 KOs), of Colorado Springs, Col., at the Roseland Ballroom in New York City on DiBella Entertainment’s Broadway Boxing card.

But how did Ota end up in Japan? By ship, of course, while serving in the Navy as an engineer. Ota admits he was a “knucklehead” after graduating from Quince Orchard High School in Gaithersburg, Md., in 2000. He enlisted in the Navy in 2001 and lived on a ship docked at Yokosuka Naval Base for three years.

“Once I joined the military I started to find out more things about life,” said Ota, who achieved the rank of ‘E4’ by the time his military career was over.

“They put that discipline in you, they have college courses; they really set me on the right track. At the time I didn’t like it but when I look back on it I really appreciate it. It ain’t for everybody but it gave me a lot of direction.”

When his contract ran out in 2004, Ota returned to America but remained intrigued by the country he had left behind.

Ota returned to Japan in 2005, married a local girl and went to a boxing gym to stay in shape. That gym, the Hachioji Nakaya Boxing Gym, offered him a few amateur fights, which he won, before setting him up with some pro fights. With only 7 amateur fights to his credit, Ota turned pro in a six-rounder against a fighter with a 9-4 record. He won by a majority decision. Ota’s lone defeat came in seventh fight, a majority decision loss to a fighter with 29 pro bouts.

For Ota, who didn’t pick up boxing until he was 24, nothing has come easy in his career.

“In Japan, I’m not a celebrated fighter,” he said. “Some kids, they have 200-300 amateur fights, then they turn pro, are signed to a promotional company, they’re taken care of and get constant fights. Basically, they’re paid to just keep winning. 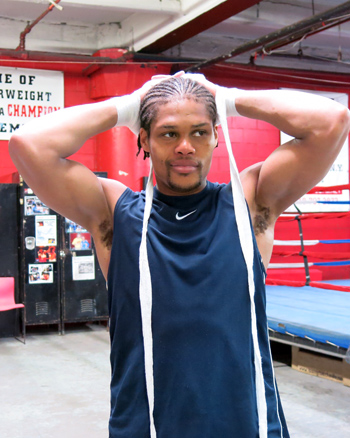 “For me, I gotta work a job [Ota works as an English tutor], go to the gym and it’s a constant grind. My situation has gotten easier; when I do get fights I can take time off, but still I’m in a constant grind. Anything that’s given to me, I take it.”

It wasn’t until last March, when he stopped Gundrick King on the undercard of middleweight champion Sergio Martinez’s title defense against Matthew Macklin at Madison Square Garden that Ota was able to show his native country what he had been up to all these years.

Lou DiBella, who is the most active local promoter in New York, signed a deal to co-promote Ota with Hachioji Nakaya Promotionsafter being brought to his attention through legendary boxing promoter and International Boxing Hall of Fame inductee Akihiko Honda, founder of Teiken Promotions.

“He’s an interesting cat and I’d like to see him get an opportunity,” said DiBella of Ota. “I put him on the card when Macklin fought Sergio and I was impressed.”

Signing with DiBella was the ideal situation for Ota.

“I would much rather go with DiBella than Golden Boy or Top Rank because even though they’re the top two promoters, DiBella works with everyone. Meaning you have a chance to fight all fighters. Some of the best fights, right now you can’t see them because of that conflict.”

Though the Perry fight is set for junior middleweight, Ota made the 147 pound limit in his most recent bout and is rated no. 11 by the WBA at that weight. Still, when asked which opponents he’d like to see himself against, he mentioned WBA junior middleweight titleholder Austin Trout and 154 pound contender Erislandy Lara, as he feels he does best against southpaw opponents.

Ironically, Trout will be facing Saul “Canelo” Alvarez in his next bout, whom Ota sparred with for three weeks to prepare for Alvarez’s bout with Alfonso Gomez in 2011.

Ota already has another fight lined up, this one for April 6 at the U.S. Army Camp Zama in Japan’s Kanagawa prefecture. After that, Ota is hoping he gets “an opportunity” at a major fight that could set him on boxing’s fast track.

“I gotta keep grinding so I can get where I want to be,” said Ota. “Right now I’m just working, keeping the lights on in my house, keeping the bills paid until I can really get my act together.”