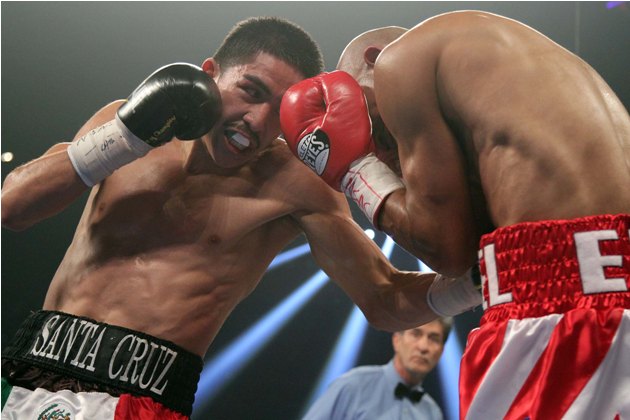 Unbeaten Leo Santa Cruz, of Lincoln Heights, Calif., has vacated his IBF bantamweight belt for a rise into the junior featherweight division in advance of what would have been a scheduled Tuesday purse bid for the right to promote Santa Cruz against twice-beaten, 118-pound mandatory challenger Jamie McDonnell, according to IBF President Daryl Peoples.

Promoted by Golden Boy, Santa Cruz (23-0-1, 13 knockouts) is coming off December’s unanimous decision victory over Alberto Guevara (16-1, 6 KOs), which marked the third defense of the belt he won by unanimous decision over Vusi Malinga in June.

Before facing Guevara, Santa Cruz, 24, had scored 11 knockouts in his previous 12 fights, including fifth- and ninth-round knockouts over ex-beltholder Eric Morel and Victor Zaleta.

“Basically, that was a decision that was made by his team, and us, and by his advisor, Al Haymon,” said Golden Boy CEO Richard Schaefer. “He has achieved everything that he can at that weight and has dominated his weight class. It is time now for him to move up and look for bigger challenges.”

McDonnell (20-2-1, 9 KOs), who turns 27 next month, is 12-0 with seven knockouts since suffering consecutive losses by split- and unanimous decision to Chris Edwards and Lee Haskins in December of 2007 and March of 2008, respectively.

With Santa Cruz moving up, McDonnell has been mandated to face Mexico’s hard-hitting Julio Ceja (24-0, 22 KOs), who has knocked out three straight opponents, for the vacant title, according to IBF Championships Chairman Lindsay Tucker.

“Whenever we have a vacated title, we always try to match the two highest-rated guys. So McDonnell is No. 1, and there is a kid named Julio Ceja, who is No. 3, and he’s from Mexico,” said Tucker.

“We were notified officially yesterday by [Golden Boy matchmaker] Eric Gomez about Santa Cruz, so we ordered McDonnell and Ceja to start negotiating on Monday.”

Schaefer said he would like to bring Santa Cruz back in the spring.

“We’re looking at a May return, because he was very busy last year. By design, we wanted him to slow down. His body needed the rest. He was on that CBS Show in December, and that was a tremendous opportunity,” said Schaefer.

“He had about 1.7 million homes watching him. So that was absolutely fantastic. But his body was a bit tired, so I think that it was good to give him some time off. Now, we’re looking at having him back sometime in May, and it could even be, potentially, on May 4, but we’re not sure yet.”

Former two-time WBO interim lightweight beltholder Michael Katsidis (28-6, 23 KOs), of Australia, has announced his retirement at the age of 32.

Nicknamed, “The Great,” and known for his warrior mentality, Katsidis won the crown by fifth-round stoppage over Graham Earl in February of 2007, and again by split-decision over Vicente Escobedo in September of 2009.

One of Katsidis’ biggest victories was a third-round stoppage of England’s Kevin Mitchell, who entered their bout with a mark of 31-0 that included 23 KOs in May of 2010.

Katsidis had lost exciting decisions to ex-beltholders Juan Diaz, Robert Guerrero and Ricky Burns, and was stopped in the ninth and 10th rounds by titleholders Juan Manuel Marquez and Joel Casamayor, respectively.

According to reports, the decision came after unfavorable results in medical tests given before what would have been a Feb. 21 bout against Weng Haya.