Martinez looks to prevail in another Puerto Rico-vs.-Mexico war 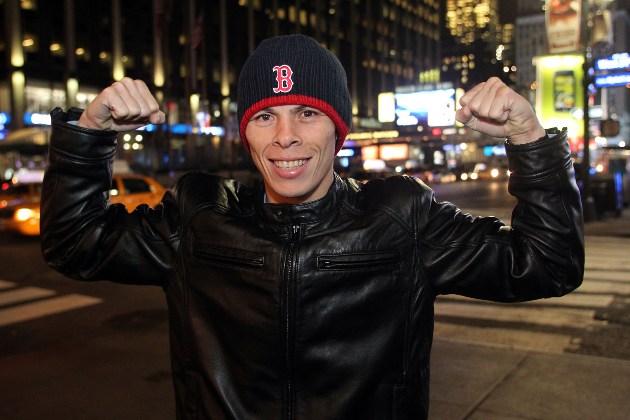 Roman “Rocky” Martinez stood in the center of the ring in Las Vegas, unsure if he had won his grueling, razor-thin battle with Mexican Miguel Beltran Jr.

Would the judges be swayed by the pro-Mexican crowd? His fight was the co-feature to Sergio Martinez-Julio Cesar Chavez Jr. on Mexican Independence Day weekend. The judges were not swayed and the Puerto Rican edged the Mexican by split decision, allowing Martinez to recapture the WBO 130-pound belt he lost to Ricky Burns in 2010. The competitive match was another in a great line of bouts between fighters from Puerto Rico and Mexico.

On Saturday, Martinez (26-1, 16 knockouts) hopes to etch another chapter in the storied history of fights between the rival nations when he takes on Juan Carlos Burgos.

“This is the next great chapter of the Puerto Rico-Mexico rivalry,” Martinez told RingTV.com through translator Ricardo Jimenez. “I know there have been a lot of great fights between our countries and both [sides] always come to fight. I look forward to having a great fight that people will remember as being part of the rivalry.”

The bout will open up an HBO Boxing After Dark tripleheader from The Theater at Madison Square Garden in New York and many pundits believe it will steal the show.

Burgos (30-1, 20 knockouts) offers a stiff challenge to Martinez. He’s been impressive of late with defeats of Puerto Rican prospect Luis Cruz and former beltholder Cristobal Cruz. Martinez is considered an underdog for this fight, but remains confident he’ll retain his strap.

“Everyone has an opinion on what’s going to happen in the fight,” said Martinez. “I know what I did and I know I’m well prepared and I’m ready to show it on Saturday night.”

Martinez has shown solid power and a great chin. He’s never been down in his career and even dropped Burns in their excellent fight. Martinez did have a layoff for almost a year before regaining his title in September, the longest layoff of his career.

“I believe that that was a great fight to come back on, I hadn’t fought in a year,” said Martinez. “It was a tough fight and I believe it prepared me for [Saturday].

Martinez hopes the beginning of his 2013 campaign is a springboard to bigger things in the future, maybe even a rematch at lightweight with Burns.

“With the opportunities ahead, I know a big win here will open up big fights for me,” he said.  “I know Ricky Burns is right there and maybe have an opportunity to do a rematch. I’m looking forward to big plans ahead – big fights.”