Boxing is a family tradition for Mikey Garcia 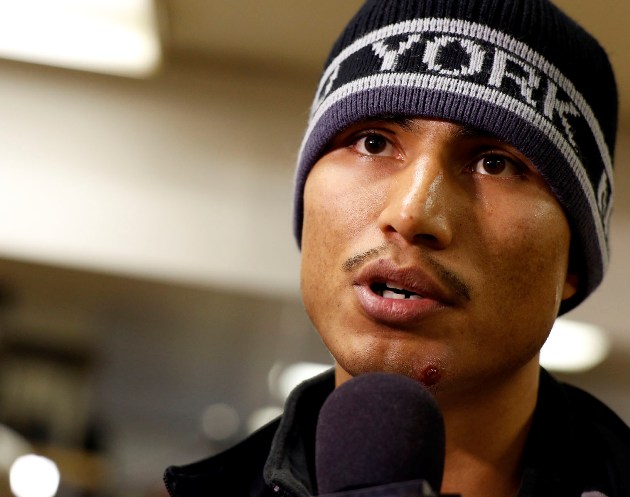 NEW YORK – Miguel Angel Garcia, the undefeated featherweight contender who more frequently goes by “Mikey,” vaguely remembers when his brother Robert won the IBF junior lightweight title against Harold Warren in March of 1998. Just 10 years old at the time, he remembers the entire family flying in to Miami, Fla. to support his 23-year-old brother, then an unbeaten contender.

Garcia remembers his brother showing up at his elementary school in Oxnard, Calif. with the IBF title belt in tow as his classmates scurried for autographs. The younger Garcia, wearing a shirt commemorating his brother’s title win, was bombarded with the same question  “Are you related?” To which he would respond proudly “Yeah, he’s my brother.”

This is the scene that the 25-year-old Garcia (30-0, 26 knockouts) hopes to replicate this weekend when he faces WBO featherweight titleholder Orlando Salido (39-11-2, 27 KOs) on Saturday at The Theater in Madison Square Garden. It’s the main event of an HBO broadcast.

Just as in 1998, many of the Garcia clan will be making the trip to the fight in hopes of crowning a second Garcia world champion.

The sport of boxing is a way of life for the Garcias of Oxnard, where patriarch Eduardo Garcia built a culture that forever changed the way the small ocean-side Southern California town is perceived by the outside world. Eduardo Garcia, himself a former amateur champion, became a boxing kingmaker when a local troublemaker named Fernando Vargas walked into his La Colonia Boxing Gym and was transformed into a 1996 Olympian and the youngest junior middleweight world champion in history.

Despite the family’s rich tradition, Mikey Garcia never saw himself following in his brother’s footsteps. He always envisioned himself becoming a police officer or even a lawyer.

“A lot of kids, they get excited with the cops going to the elementary school with the dogs and the whole show,” said Garcia, who graduated from the Ventura County Police Academy in 2010.

It wasn’t until he was 14, when he stepped in to face a fighter from the gym who was without an opponent at a local show, that he thought of the sport as something for him. His nephew Javier Garcia, who himself is now a pro with a 8-2 (7 KOs) record, was fighting on the card.

“We went to go see him and one of the guys from the gym did not have an opponent and my brother signed me up. I said alright, I wasn’t training or whatever, but I had been fooling around my nephews. I did it, I kinda liked it, it was a nice experience and I started to train after that.”

It may have just been his DNA that enabled Garcia to take to it like a fish to water, as he eventually won gold at the 2004 National Junior Golden Gloves Championships and the 2005 National Police Athletic League Championships before turning pro in 2006 at the age of 18.

“At first it was kinda fun, we just took it as a joke,” admits Robert Garcia, now one of the sport’s most celebrated trainers. “We knew he had been around boxing all his life, never fought, never went to the gym but at least around boxing so he knew how to box. When he started taking it serious, getting into tournaments, that’s when we realized that’s what he wanted to do.”

“Probably not,” he said. “When I was fighting, Mikey wasn’t even in the gym. Mikey started boxing at 14 and never wanted to box. I saw my brother doing other stuff. He’s very smart so I thought he was going to be doing other stuff but now that he’s boxing I’m proud of him and he’s doing a great job. This is just the beginning. I think he’s got a great career ahead of him.”

When asked what was the difference between the two (in the ring), Robert admits that his brother is better at controlling his temper.

“I was more like a brawler,” he said. “I know I had the skills but I know during the fights I always wanted to fight. That’s one thing Mikey doesn’t do. Mikey keeps his game plans and fights very smart.”

If the goal is to stay controlled, then Salido may be the ultimate stress test. Salido, 32, of Ciudad Obregon, Mexico, is one of the grittiest champions in boxing today, having been thrown to the wolves early in his career before winning the IBF featherweight world title in 2010.

Salido lost the title in his next fight to Yuriorkis Gamboa but quickly grabbed the belt he currently holds and the biggest win of his career the following year, when he rallied to knock out previously unbeaten superstar Juan Manuel Lopez in April of 2011 in eight rounds, then duplicating the feat last year in 10.

Garcia’s manager Cameron Dunkin admits that this wasn’t their first choice of opponent.

“We actually tried to fight two other champions and it didn’t work out; this was the guy we didn’t want to fight,” said Dunkin. “He’s the best featherweight in the world right now, but I called Robert and said ‘Robert, if we gotta do Salido would you do it?’ He was very confident, he said, ‘He’s the toughest guy but Mikey’s ready.’ That’s why we chose it, but we sorta backed into it.

“I’ve been sick for a week over this thing and I wasn’t happy when we made it, but you gotta believe in your horse and usually my horses win.”

Yet as the fight approaches, Robert Garcia seems to feel more and more confident in their chances.

“Styles make fights and I think that Salido’s style is perfect for Mikey to do what he’s best at,” he said. “We know Salido’s game, a warrior and he’s going to come out and give his best but Mikey’s style will give us good results.”