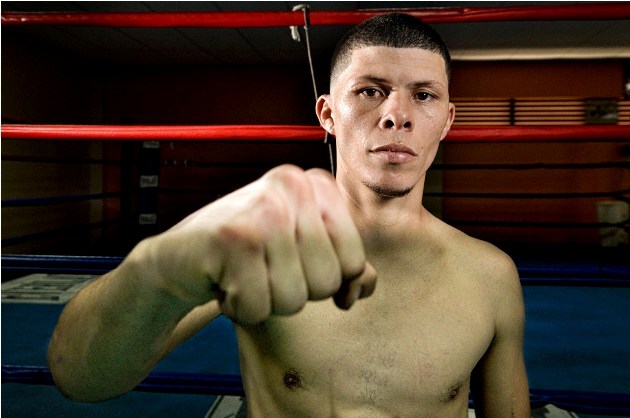 Former WBO featherweight titleholder Juan Manuel Lopez will return to the ring against Aldimar Silva Santos at Coliseo Ruben Rodriguez, in Bayamon, Puerto Rico — site of his first of two knockout losses to Orlando Salido — but that won’t happen until Feb. 2.

So when Puerto Rican junior lightweight Roman “Rocky” Martinez (26-1-1, 16 knockouts), Puerto Rico’s only reigning world titleholder, enters the ring opposite Mexico’s Juan Carlos Burgos (30-1, 20 KOs) in defense of his WBO junior lightweight belt on Saturday night, it will be with the eyes of his countrymen upon him, as well as with their hopes on his shoulders and in his heart.

Since falling by unanimous decision to Japan’s Hozumi Hasegawa in a failed bid to earn the WBC’s vacant featherweight belt in November of 2010, Burgos’ five-fight winning streak has included a win over previously unbeaten fighter Luis Cruz.

A resident of Las Piedras, Puerto Rico, Luis Cruz was 19-0 with 15 knockouts entering his fight with Burgos in November of 2011.

“Burgos beat Luis Cruz, a former undefeated fighter, in Las Vegas a few years ago. Since then, many people in Puerto Rico started watching Burgos as the guy that beat one of our fighters,” said Peter Rivera, of PR Best Boxing Promotions, in regard to Martinez, 29.

“So now, Rocky has the opportunity to gain revenge. So it’s like a rematch fight for Puerto Rico. For us, Rocky’s the only champion that we have right now, and there will be a lot of people who will be watching that night to see what’s going on.”

“Another possibility is that if Salido wins against Mikey Garcia, he has said that he wants to move up to the 130 pound division for Martinez if Martinez beats Burgos. So then, that’s a bigger fight in Puerto Rico,” said Rivera.

“That’s because Salido beat JuanMa Lopez twice on the island. So everybody knows him, and they know that the styles of these two guys. So there’s a lot of things happening on Saturday that has everyone in Puerto Rico watching what’s going on.”

In a RingTV.com poll of 13 boxing insiders, 11 chose Burgos to defeat Martinez.

“I believe that we have the experience and the advantage, because I’ve been in the bigger arenas. I’ve fought England, I’ve fought in Las Vegas. And now, we’re in New York, where we have a lot of Puerto Ricans, so I believe that I have a little bit of an advantage,” said Martinez.

“I’ve just prepared myself to retain my title, and we have a great Puerto Rican tradition here in New York. But at the end, it’s going to come down to me doing what I need to do. If everything goes the way that I think it will, I see myself winning by knockout in the later rounds.”

FELIX VERDEJO PROVIDES HOPE FOR THE FUTURE OF PUERTO RICO

On Wednesday, the 19-year-old, who has also sparred with Martinez, discovered he was staying at a hotel that was frequented by legendary Puerto Rican champion Felix Trinidad.

“It’s an honor to know that a great star has stayed here, and to be fighting where those great stars have been. It’s great to be on such a great card,” said Verdejo.

“I’ve sparred with Rocky Martinez a few times, and he’s a strong fighter and gives everything in the ring. It was a great experience.”

Verdejo debuted with December’s four-round unanimous decision over Leonardo Chavez, who had knocked out his only previous opponent.

“On Saturday, I want to look spectacular. I want to score a knockout,” said Verdejo. “But I’m not going to go crazy looking for it. But it’s going to be exciting. Just keep watching.”