THE RING Magazine February issue: At a glance 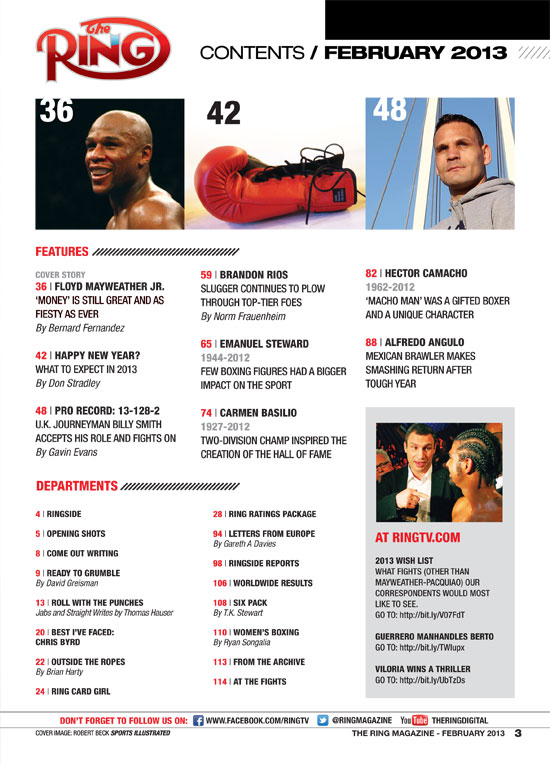 Floyd Mayweather Jr. might’ve slipped just a tad in terms of his boxing ability. And, who knows, maybe a short stint in jail has made him wiser.

Make no mistake, though: Mayweather remains the most-formidable fighter in the world until someone can prove otherwise and he has the same prickly personality he has always had as he enters 2013.

Still formidable? Mayweather’s record remains perfect in spite of surprising resistance from Miguel Cotto in last fight. Still ornery? He and advisor Leonard Ellerbe refused to speak to THE RING because Mayweather and Manny Pacquiao shared the top spot in the magazine’s pound-for-pound rankings at the time. 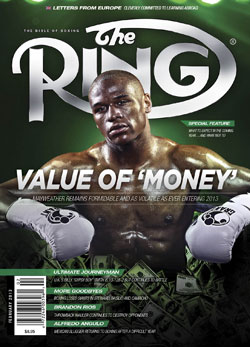 In Mayweather at 35, our cover story in the February 2013 issue, regular contributor Bernard Fernandez takes a look where Mayweather stands in his career and life as another chapter begins.

Only one thing is certain: It won’t be boring.

Also in the February issue, regular contributor Don Stradley tries to tell the future in What to Expect in 2013 ÔÇª and What Not To. Some of the 20 items – 10 for each category – are written tongue in cheek but all of them have a ring of truth.

In Fighting On, British correspondent Gavin Evans tells the compelling story of Billy Smith. The proud journeyman from Wales was an unfathomable 13-127-2 at press time but, accepting of his role as an “opponent” for more-talented upstarts, continues to take bouts and fight his heart out.

Regular contributor Norm Frauenheim writes in Built for Slaughter that brawler Brandon Rios has tapped into fans’ lust for carnage as well as anyone in the sport, making him one of the most-popular boxers on the planet.

THE RING bids a sad farewell to three important figures in the issue, trainer Emanuel Steward in A Boxing Tragedy, former two-division champion (when it really meant something) Carmen Basilio in Forever the Champ and Hector Camacho Sr. in A Classic Character.

In Doggedly Forward, contributor Bart Barry chronicles the return of slugger Alfredo Angulo after a difficult period in the Mexican’s life.

And, in Letters from Europe, UK correspondent Gareth A Davies writes that Nathan Cleverly plans to spend more time in the United States to further his boxing education.