Japanese boxing closes out the year with a bang 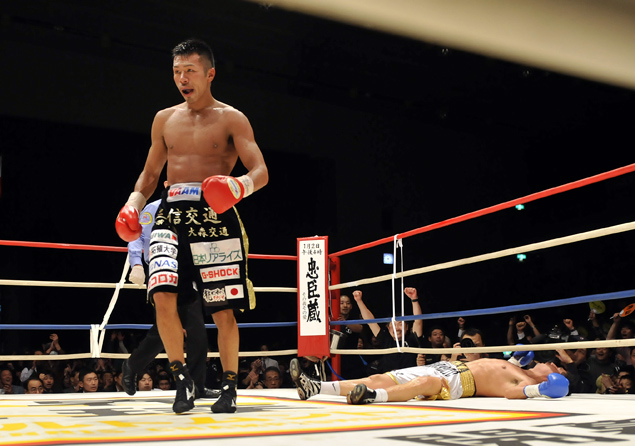 Takashi Uchiyama walks to a neutral corner after icing Jorge Solis in the 11th round of their WBA 130-pound title fight last December. THE RING’s No. 1-rated junior lightweight will defend his WBA belt against fellow unbeaten standout Bryan Vasquez on Dec. 31.

While most Americans are preparing to spend their first New Years Eve without Dick Clark in 40 years, boxing fans in Japan are being treated to two of their biggest boxing events of the year. Two separate boxing cards from Tokyo and Osaka will feature world title fights with seven fighters rated by THE RING in action.

The Tokyo card, which will be promoted by Watanabe Promotions, pits WBA junior lightweight titleholder Takashi Uchiyama (18-0-1, 15 knockouts), of Tokyo, against Bryan Vasquez (29-0, 15 KOs), of San Jose, Costa Rica, in the main event.

Sato, Akaho and Kokietgym are rated Nos. 3, 7 and 2 respectively at 115 pounds, while Kono is unrated. The venue will be the Ota-City General Gymnasium.

Meanwhile, 300 miles away in Osaka, Ioka Promotions will host an event at the Bodymaker Colosseum, which will be headlined by unified strawweight titleholder Kazuto Ioka (10-0, 6 KOs), of Osaka, stepping up to junior flyweight to face Mazatlan, Mexico’s Jose Alfredo Rodriguez (28-1, 17 KOs).

Ioka, who is rated No. 1 by THE RING, is coming off a sensational, Fight of the Year candidate win over Akira Yaegashi in June. Rodriguez is coming off his lone career defeat, a unanimous decision loss to Alberto Rossel in April.

For those who haven’t figured a way to stream Nippon TV from the U.S., boxing action returns to American airwaves next Friday, as unbeaten super featherweights Rances Barthelemy and Arash Usmanee headline the season premiere of ESPN2’s Friday Night Fights.