Marquez’s KO of Pacquiao is voted Knockout of the Year 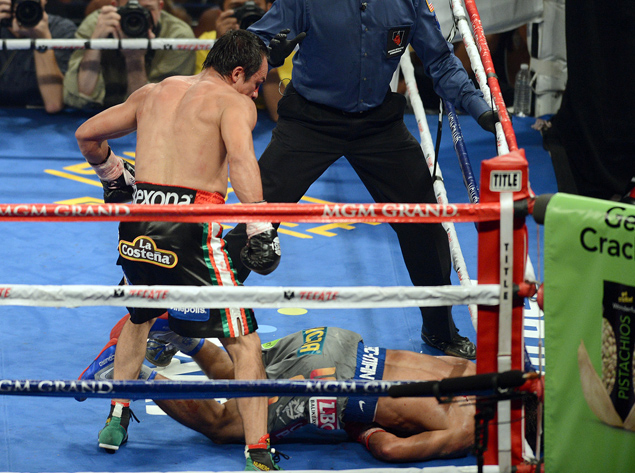 How could Knockout of the Year honors for 2012 be awarded to any KO other than Juan Manuel Marquez’s sixth-round shocker against his arch rival Manny Pacquiao in their instant-classic fourth fight?

It can’t. The greatest moment of Marquez’s hall-of-fame-worthy career was the overwhelming choice among fans who took part in RingTV.com’s year-end awards poll. A little over 87 percent of the votes went to “Marquez KO 6 Pacquiao.”

Of the other four worthy candidates, only Danny Garcia’s body-twisting fourth-round halting of Erik Morales garnered more than three percent of the votes (5.2%). That stoppage was brilliant in its brutal finality, as was Adonis Stevenson’s opening-round blasting of Jesus Gonzalez, Mikkel Kessler’s fourth-round KO of Allan Green, and Shinsuke Yamanaka’s seventh-round demolition of Tomas Rojas; but those KOs did not come close to the magnitude of Marquez’s masterpiece on Dec. 8.

It was a legitimate one-hitter-quitter – Pacquiao didn’t know what happened to him until many tense minutes after the fight. He ate the big right hand and his lights were instantly turned out. When a fighter can’t stop himself from falling face down on the canvas you know he’s not going to beat the referee’s 10 count. And Pacquiao wasn’t going to get up under his own power for several minutes. 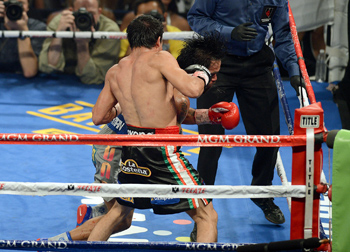 The timing was perfect – The punch heard around the world landed on the button just as Pacquiao lunged forward with a missed jab, a split second before he could fire off his vaunted left cross, which had dropped Marquez in the previous round. Pacquiao’s forward momentum added to the impact of the well-placed and well-timed shot. And the punch, which landed in the final seconds of the sixth round, couldn’t have come at a better time in the fight. Pacquiao had come on strong in rounds four and five after being dropped in the third. By the final minute of sixth, Marquez’s face, which was already bleeding from a gash above the nose and from both nostrils, looked like it might fall apart in rounds seven and eight. Good thing for Marquez that he ended matters at the half-way point.

It had a great story line – Marquez, after falling just short on the scorecards in their three previous fights (controversially so in bout No. 3), finally got his revenge. Most fans, including a fair number of Marquez supporters, expected Pacquiao to win another close, perhaps disputed decision, with bout No. 4. However, with one monster right hand, Marquez finally forced a decisive ending in their series and vindicated himself and his fans (as well as diehard Floyd Mayweather supporters).

The stature of the KO victim – It’s rare for an elite fighter to be on the wrong side of a Knockout of the Year candidate, let alone a bona-fide star like Pacquiao. The last time a fighter as highly regarded, dominant and popular as Pacquiao was flattened with one shot was when Antonio Tarver iced Roy Jones Jr. in the second round of their 2004 rematch.

The ripple effect – Jones was lucky Twitter wasn’t around when Tarver caught him. Pacquiao’s knockout loss made international sports headlines and it was the subject of mainstream radio and TV talk shows for days. However, social media kept it relevant for weeks in the form of memes and PhotoShoped pics of the laid-out Pacquiao in a variety of situations, which range from unflattering to tasteless.

Some are funny, most are amateurish. But all of the media buzz – social and professional – points to the shocking, arguably historic, nature of a boxing knockout that was experienced the world over.

Next year-end award: Fight of the Year