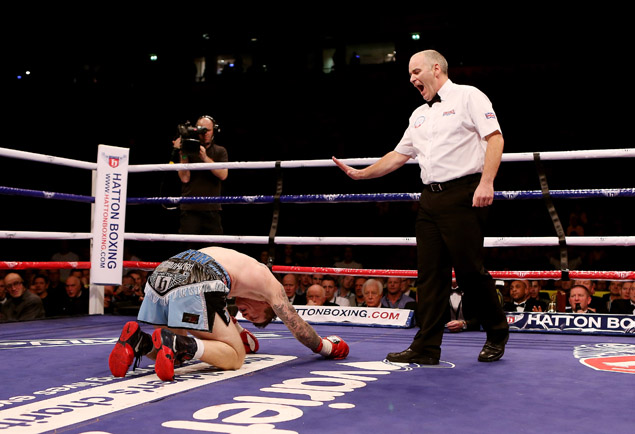 Hatton, 34, who, like Senchenko, weighed in at 146.5 pounds, lay on the canvas in pain before being counted out by referee Victor Loughlin, even as he led, 77-76, on the cards of judges Oliver Brien and John Keane, and 78-74 on that of the third judge, Robin Dolpiere.

Hatton was ending a long layoff, having lost two of his previous four fights by stoppage to Floyd Mayweather Jr. and Manny Pacquiao in December of 2007 and May of 2009, respectively. His last fight prior to facing Senchenko, 35, had been against Pacquiao.

“I guess that we’ll go back to the drawing board and figure out our future,” said Malignaggi, who called the fight from ringside for England’s Prime Time network.

Not so fast, said Schaefer. 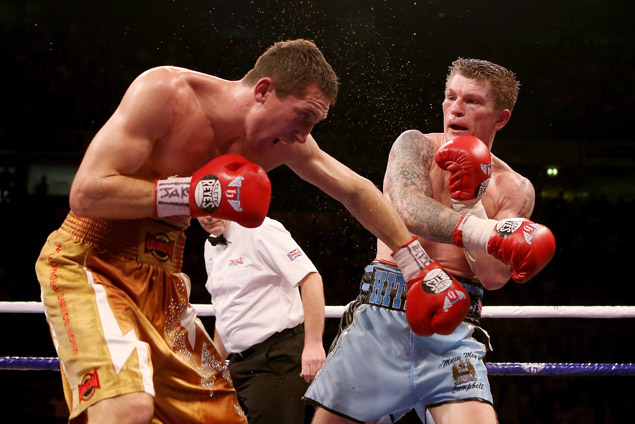 “I don’t think that Ricky Hatton should let his head hang, and that he should build on this,” said Schaefer. “If he should want to have a [rematch] against Paulie Malignaggi, and fight for the WBA welterweight championship, I’ll be happy to see if we can put that fight together.”

But Schaefer said Hatton’s effort against Senchenko is worthy of more than that.

“Even though he didn’t win, I was quite impressed by Ricky Hatton. We all know that he picked a very difficult and dangerous opponent, and a guy who is a natural welterweight. He picked a guy who has fought all of his fights as a welterweight, and who had a tremendous reach and height advantage,” said Schaefer.

“Everybody had agreed that, prior to the fight, that Ricky had picked a difficult fight for his first one back after three and a half years out of the ring. So, having said that, I have to say that he looked very good, and that he was ahead in the fight, and that he was ahead on the scorecards. I have to say that in the first five rounds, in my book, they all went to Ricky Hatton.”

Hatton returned to the ring from an ongoing battle to overcome depression, drug addiction and suicidal thoughts while out of action. 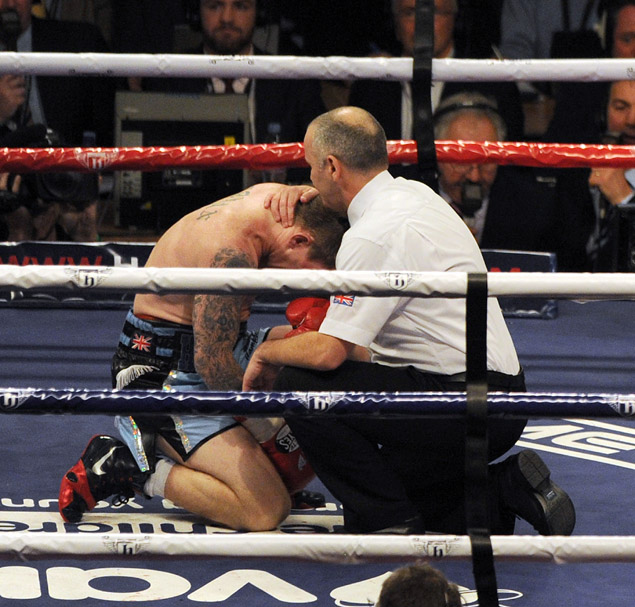 “But as close as it was, it’s another defeat. … It’s to be expected after three and a half years, and I was in against a good opponent. But I’ve had to keep picking my ass up off the floor, and I don’t know how much I can keep doing that. I’ve got some really serious thinking to do.”

Hatton thought long and hard about rising from the canvas in following Sencheko’s ninth round shot, but he just couldn’t do it thanks to a blow Schaefer compared favorably to that by former undisputed middleweight champion Bernard Hopkins against Golden Boy President Osar De La Hoya during a similar ninth-round stoppage by Hopkins in September of 2004.

“Look at Oscar against Hopkins, but that’s just the effect of that punch. But because of that one punch. We’ve known many great fighters who have gotten hit by these shots and couldn’t make it up,” said Schaefer.

“When you get hit like that, you just can’t get up. So I think that he did well until he got hit with that liver shot, and we all know how paralyzing these liver shots are. You try to get up and it just isn’t possible.”

A man who owns victories over former titleholders Kostya Tszyu, Carlos Maussa, and Jose Luis Castillo by knockout, and southpaws Juan Urango and Luis Collazo by decision, Hatton indicated, during a post-fight interview, that his desire to fight still is there.

“I’m a champion, and I’m a fighter, and I’m sick. I’m not a failure. But I’ve got to have a proper thinking about things, because that’s not the way that my career should end. But I maybe will have to start thinking about that, you now? I’m not going to rush it. It’s a big decision. I was dwelling on it to long the last time, you know what I mean? I’ll have a good sit down with my team and make the right decision. I did some impressive things for three and a half years out,” said Hatton.

“But I’m sick of losing as proud a man as I am, you know? I’m so sorry. I’m not a quitter. I keep trying. I wanted a challenge and I picked a challenge, and it didn’t come up tonight. But I’ve got to thank everyone once again for turning up. I felt that I had something to prove, and I think I proved it tonight, three and a half years out, and with all of the demons that I had. But heart-broken isn’t the word for it.”

If Hatton still wants Malignaggi, Schaefer said he would try to oblige him.

“We’ll have to talk to the teams to see what is available and when,” said Schaefer. “Maybe, that could happen, but I’m thinking in April or May or something like that.”