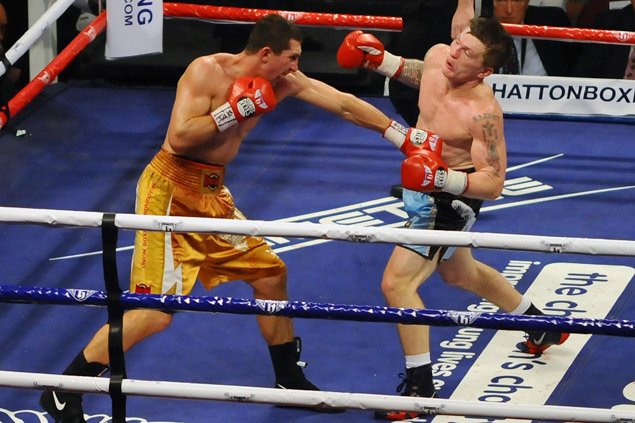 Ex-WBA welterweight titleholder Vyacheslav Senchenko, of Ukraine, ripped a left hook to the body that dropped former junior welterweight champ Ricky Hatton, of England, for the 10-count on the way to Saturday’s Showtime-televised, ninth-round knockout before Hatton’s fans at the sold-out Manchester Arena.

In victory, Senchenko (33-1, 22 knockouts) rebounded from April’s ninth-round knockout that dethroned him as WBA 147-pound beltholder against Paulie Malignaggi (32-4, 7 KOs), whom Hatton stopped in the 11th-round in November of 2008 in a 140-pound bout.

Hatton (45-3, 32 KOs), who, like Senchenko, weighed in at 146.5 pounds, was ending a long layoff, having lost two of his previous four fights by stoppage to Floyd Mayweather Jr. and Manny Pacquiao in December of 2007 and May of 2009, respectively.

“It was a good shot, to be honest, and he nailed me with a few of those early on,” said Hatton, 34. “So I should have thought, ‘he’s looking for that, he’s looking for that,’ and I didn’t. So that’s, I guess, what being off three and a half years does for you, you know?” 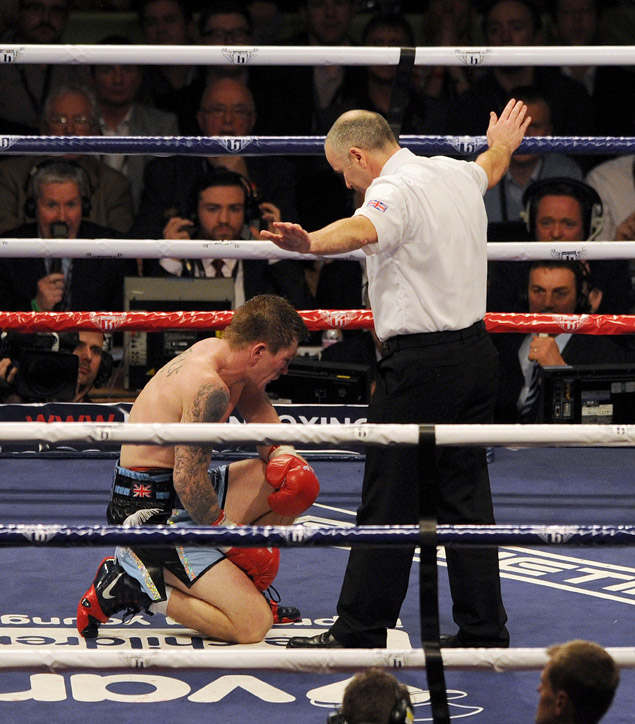 “If you had been fighting regularly, you would have thought about that, and you get yourself together, accordingly. But, you know, I think that I was doing alright, you know, being that I was three and a half years out, and I’m a former world champion. He only lost his unbeaten record in his last fight. A lot of people patted me on the back for taking this challenge. But I’m just gutted.”

Hatton lay on the canvas in pain before being counted out by referee Victor Loughlin, even as he led, 77-76, on the cards of judges Oliver Brien and John Keane, and, 78-74, on that of the third judge, Robin Dolpiere.

“I thought that I was maybe four rounds up, but there were obviously clear sings of ring rust. I mean, I hurt him a couple of times,” said Hatton.

Hatton, whose last fight was against Pacquiao, had endured an ongoing battle to overcome depression, drug addiction and suicidal thoughts while out of the ring.

“I don’t want to make any hasty decisions, but I’m really heart-broken, because I worked so hard, and not just for the 12 weeks of the training camp,” said Hatton.

“But for the last five months getting my life back together. I felt like I was winning, and that it was nearly over, and I wanted one shot. So I’m absolutely heart-broken.”

“The biggest surprise was in talking about Senchenko coming apart or unfolding, but he never did. He stayed mentally with it, and that’s something that was surprising to me, and, I think, to a lot of other people. But I wasn’t surprised,” said Malignaggi, who called the fight from ringside for England’s Prime Time network.

“I expected an over-anxious fighter going into the fight for the first time in three and a half years in front of a very voiciferous crowd tonight. I can’t say that I was totally surprised about anything. I had him winning the fight close, and then he got caught with a body shot. He was being the typical Ricky Hatton. Maybe his timing was a little off, but he was fighting a typical Ricky Hatton kind of fight.”

“I don’t know. I guess that we’ll go back to the drawing board and figure out our future. We were planning on fighting Ricky Hatton next. I think, and we were planning on going to the negotiating table with his team. I don’t think that’s going to happen now,” said Malignaggi.