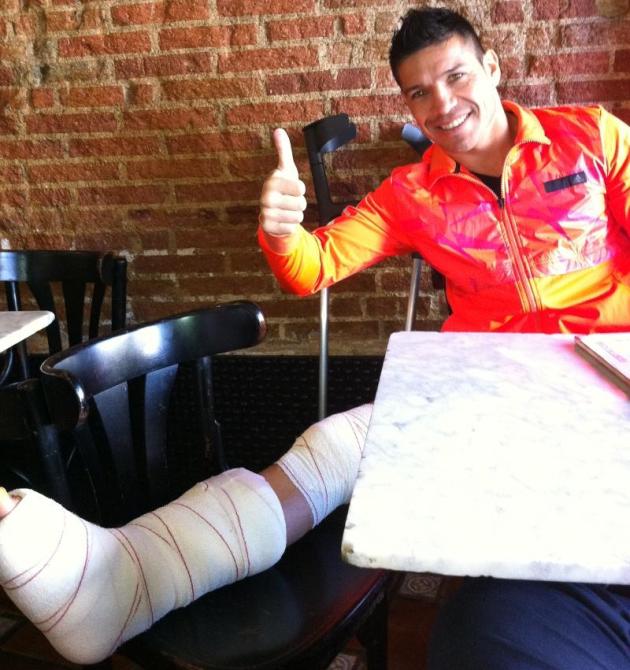 “We are very pleased that Sergio’s surgery today was successful with no complications. He’ll be back on his feet in a few weeks and able to train shortly thereafter,” said promoter Lou DiBella.

“He’ll have no problem getting ready for an April fight and we hope to help him realize his dream of defending the WBC middleweight championship in his homeland of Argentina.”

The procedure that was executed by highly regarded physician, Villamor Perez, the personal doctor for the King of Spain, Juan Carlos I.

“We couldn’t have been any happier with the outcome. Sergio will immediately begin working with our own personal doctor Raquel Bordons on his rehab, and will be back in the gym very soon.”

Martinez (50-2-2, 28 knockouts) will “pursue a rematch” on Sept. 14 with Chavez (46-1-1, 32 KOs) after first facing an opponent to be determined in an HBO-televised bout from his native Argentina on April 27, according to Martinez’s advisor, Sampson Lewkowicz

“We want to thank everyone who has sent their thoughts and prayers to Sergio for a successful and speedy recovery,” said Lewkowicz.

“Now that the surgery is complete, I have no doubt that Sergio ‘Maravilla’ Martinez will be back better than ever, and continue to show everyone that he is one of, if not the best pound-for-pound fighter in the world.”

Martinez’s ligament damage occurred during the clash with Chavez, after which he also received eight stitches to repair a cut over his left eye, two staples in his head and suffered from what initially appeared to be a broken left hand.

Against Chavez, Martinez rose from a knockdown in the 12th round after having dominated the first 11, winning by scores of 118-109 on the cards of judges Dave Moretti and Adalaide Byrd, and, 117-110, on that of Stanley Christodoulu.

“I am very, very happy with how the operation went,” said Martinez, 37. “I will be rehabbing for two or so weeks, and then I will be back in the gym, and begin preparations for my next title defense, which will take place next year in my native Argentina. This will be my first fight there in many years and I am really looking forward to defending my title in front of all of my great fans in Argentina.”

“I believe that we will have an agreement with HBO, that is, if they agree on the opponent that we choose,” said Lewkowicz. “There are four guys on the list, so we can’t confirm the opponent because we don’t have it in black and white.”

Torres, 33, is coming off a first-round knockout of Jose Soto in August that represented his fourth straight stoppage victory and his fifth consecutive win since falling by unanimous decision to Yudel Johnson in June of last year.

Murray, 30, will be after his second consecutive victory when he meets Venezuela’s Jorge Navarro (12-0, 10 KOs) for the WBA’s interim belt in on Nov. 24, having battled to a disputed draw against then-WBA titleholder Felix Sturm in December of last year.

Spada, 32, has won four consecutive fights, two of them by knockout, since falling by unanimous decision in April of last year to then-unbeaten Darren Barker. Barker was knocked out in the 11th round of his next fight by Martinez in October of last year.

Hope, 31, had his five-bout winning streak ended in July by eighth-round knockout against Grzegorz Proksa, who was subsequently stopped in the fifth round by Gennady Golovkin in September. A winner of an earlier bout against Proksa by majority decision in March, Hope must first get beyond a Nov. 17 bout opposite Norbert Szekeres.

Chavez is also considering an interim bout, according to his promoter, Top Rank CEO, Bob Arum, although much depends on Chavez’s eligibility in the wake of having tested positive for marijuana metabolites consistent with the use of the drug in the aftermath of his loss to Martinez.

In other news, Lewkowicz announced that he has signed Torres, nicknamed “Mochuelito,” to an exclusive multi-year promotional agreement.

“I am very excited to work with Mochuelito and his team,” said Lewkowicz of Torres, whose brother, Ricardo, is a former junior welterweight titleholder. “I will announce his next fight shortly.”