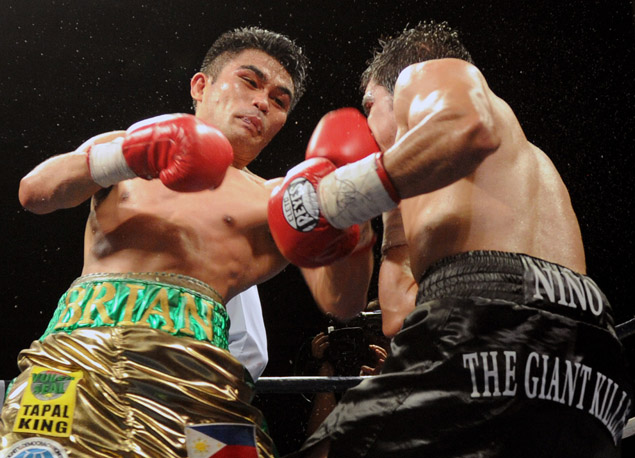 WBO flyweight titleholder Brian Viloria has had a front-row seat for Manny Pacquiao’s rise to super stardom. He won his first world title — the WBC’s junior flyweight belt — with a first-round knockout of Eric Ortiz the night that Pacquiao began his post-Erik Morales rebirth with a KO of Hector Velasquez. For a number of years, the Hawaiian-born Filipino-American Viloria shared trainer Freddie Roach, training alongside the Pacman out of the Wild Card Gym in Los Angeles.

For the first time in years, Viloria is back at the Wild Card. Manny is still there, preparing for his fourth meeting with Juan Manuel Marquez on December 8 at the MGM Grand in Las Vegas. Viloria says training alongside Pacquiao has been a source of motivation as he heads into his own battle with Marquez — Hernan, that is, the WBA title claimant from Empalme, Mexico, against whom he will seek to unify the 112-pound titles at the Sports Arena in Los Angeles this Saturday.

Speaking on Pacquiao’s bout, Viloria sees the possibility to silence all skeptics if Pacquiao approaches this fight as he did past encounters.

“He just has to bring back that old Manny Pacquiao, that old in-and-out, just that aggressive fighter,” Viloria (31-3, 18 knockouts) tells THE RING. “I think the last couple of fights, [Pacquiao] has been fighting a little too passive and letting Marquez dictate the pace a little too much. I think the way he’s settled down on his punches, he gives Marquez a little bit more of an anticipation in his step.”

Pacquiao, 33, is six years younger than Marquez, but has slowed precipitously in recent fights, appearing lethargic in a disputed points victory over Marquez a year ago and allowing a wounded Timothy Bradley the opportunity to survive moments of peril in an even more hotly disputed decision loss in June. Viloria thinks movement, which Pacquiao has worked on cultivating in training with Roach, will be his key to victory.

“I think the way that [Pacquiao] first fought him, the way Manny would step in side-to-side and was all over the place, it confused Marquez a little bit,” said Viloria. “I think if Manny comes out and is a little more aggressive in this fight and tries to move side-to-side, he’ll be able to win like he did in his last three fights.”

Still, Viloria cautions, “Marquez is always tough, he’s always going to make it a close and exciting fight to watch.”