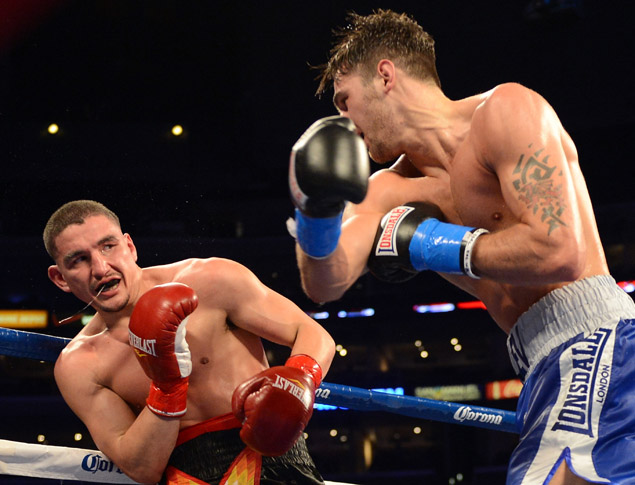 LOS ANGELES – American fans got their first look at Nathan Cleverly on the undercard of the Abner Mares-Anselmo Moreno fight at Staples Center on Saturday, and the reaction will probably be mixed depending on what they like in a fight.

The undefeated WBO light heavyweight titleholder from Wales stopped Shawn Hawk in the eighth round of their Showtime Extreme-televised bout, dropping the late-sub three times before the fight was finally waved off at 1:53 of the round.

Cleverly (25-0, 12 knockouts) outworked Hawk from the get-go but THE RING’s No. 3-rated light heavyweight did not outclass the South Dakota native the way fans expect a world-class beltholder to handle an unranked fighter. He proved to be an entertaining fighter with his aggressive, busy stalking style, though.

Cleverly teed off on Hawk’s head for the first four rounds of the bout, but could not discourage the underdog, who landed sneaky jabs and straight rights off the ropes. However, the active Welshman switched his attack to the body in the middle rounds and gradually began breaking down the proud Sioux warrior.

Hawk was dropped twice at the end of the seventh round – downed by sheer volume punching – but refused to stay down. Cleverly pounced on him at the start of the eighth round, producing a third knockdown with a series of body shots, however Hawk got up again. Cleverly’s follow-up flurry finally prompted referee Tony Crebs to stop the fight. 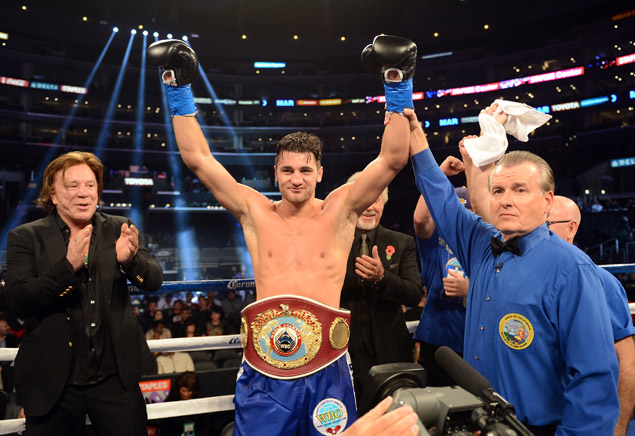 “I enjoyed this, I enjoyed the atmosphere,” Cleverly said afterwards. “(Hawk) was a tough opponent but eventually I broke him down. I’m really looking forward to coming back to the US and fighting here again.”

The 25-year-old UK star was unapologetic about allowing himself to be nailed cleanly by his unheralded opponent.

“I set up this fight to be fast, strong and exciting,” he said. “I like to take risks sometimes, so I get caught with punches, but this is boxing. It’s a combat sport.”

The talk around press row is that Cleverly is in the running to face former champ and living legend Bernard Hopkins next March at Brooklyn’s Barclays Center.

Orozco (16-0, 12 KOs), a Kansas native now based in San Diego, was buzzed midway through the first round of the evenly fought phone-booth battle but the heavy handed boxer gradually began to time Escobar (8-2, 5 KOs) with accurate and compact power punches as the fight wore on.

Late in the sixth round, Orozco caught Escobar with a hook that sent the Riverside, Calif.-based fighter reeling to the ropes. Orozco nailed Escobar with a right cross-left hook-body shot combination before Escobar’s back touched the ropes. The referee stepped in and stopped the fight at 2:06 of the round to save Escobar from further punishment.

“My last three or four fights were (quick) knockouts so this was a great learning experience,” Orozco said. “I feel great and I’m glad I put on a good show for the fans in my Showtime debut.”

On the non-televised undercard, junior middleweight prospect blasted out Jeremy Marts 44 seconds into the first round of their scheduled six-round bout.

Pearson (6-0, 5 KOs), a southpaw from Dayton, Ohio, caught the Iowa-based journeyman with right hook. Marts (8-13, 6 KOs) got up but was on wobbly legs, promoting the referee to wave the bout off.

Pearson, a two-time national amateur champ who is managed by Al Haymon, was hoping to get more rounds in.

“That’s boxing,” he said. “One shot is all it takes sometimes. I go into each fight knowing it could be me getting caught cold, so I’m careful in there.”

Journeyman Alonso Loeza upset Zachary Wohlman, stopping the local favorite 17 seconds into the fourth and final round. Loeza (3-7-1, 3 KOs), of Gilroy, Calif., dropped Wohlman (4-1-1, 1 KO) near the end of the third round and almost had the popular Hollywood, Calif., fighter out. Wohlman couldn’t recover enough to protect himself at the start of the fourth round.

In the opening bout of the Golden Boy Promotions card, Robert Easter, of Cincinnati, Ohio, won his pro debut with a second-round stoppage of Eddie Corona (0-2), of Omaha, Neb.