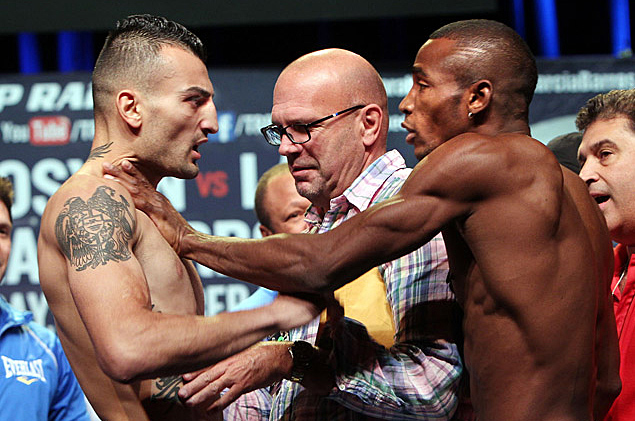 Vanes Martirosyan has been criticized throughout his career for talking a big game but never fighting anyone of note.

The decorated amateur is undefeated and fought on HBO in 2009, a decisive win over fellow undefeated prospect Joe Greene at Yankee Stadium, but the victory wasn’t a springboard and led to more fights against sub-par opposition.

More than two years later, Martirosyan finally has his big fight – and a chance to prove his doubters wrong – when he takes on top junior middleweight Erislandy Lara (17-1-1, 11 knockouts) in the main event of HBO’s Boxing After Dark tonight at the Wynn Casino in Las Vegas, Nev. (9:45 p.m. ET).

“I’m fighting somebody now so we’ll see what they say after this,” Martirosyan, 26, told RingTV.com. “I think Lara is a great fighter, he comes from the Cuban [amateur] background and Saturday night I will beat him. He’s good but I’m better. I hope it’s the start of Vanes. It’s the start of big things to come.”

Martirosyan (32-0, 20 knockouts) has big plans, with the winner of Saturday’s fight the mandatory to Saul “Canelo”Alvarez, but Lara, 29, presents a stiff test. The 2005 World Amateur Champion at welterweight is a crisp southpaw with good power and long arms. After drawing with Carlos Molina in March 2011, he soundly outclassed Paul Williams in his HBO debut, only to be robbed on the cards. Now, he has another crack on the network to show his class.

“I can do many different things in the ring, but I’m going to set the pace and impose my game plan on him,” said Lara, who recently signed with powerful advisor Al Haymon. “He’ll have to deal with my speed and everything else I’m bringing.  I don’t want to give up my game plan but I’m coming out to establish my will on him.”

Friday’s weigh-in was heated with the fighters almost coming to blows during the customary pre-fight stare-down. Both fighters made the junior welterweight limit of 154 pounds (Martirosyan 153, Lara 153 ¾) and Lara was irritated by Martirosyan’s actions.

“He tried to get up in my face thinking I was going to back-up but I crossed my arms and stood there piercing him with a look of determination and pushed him off me when he started putting his finger in my face,” said Lara. “He’s going to see on fight night when I put a beating on him that he’s not on my level.”

The 2004 Olympian has yet to lose a fight, with his biggest scare coming against perhaps his toughest opposition to date – Kassim Ouma. In the January 2010 fight, Ouma dropped the Armenian hard in the ninth and lost a unanimous decision, though many thought he won. Many doubt Martirosyan and he is a sizeable underdog heading into Saturday night, but he says the detractors fuel him.

“It motivates me, because they didn’t think I could be a top guy in the amateurs and I [proved them wrong],” said Martirosyan. “That’s the reason I got my name “The Nightmare”.

And while Martirosyan, THE RING’s No. 5-rated junior middleweight, feels overlooked, Lara feels he has finally earned the respect of the boxing public.

“I believe the fans know I’m the WBC No. 1-ranked contender for a reason,” said Lara, THE RING’s No. 4-rated junior middleweight. “I’ve worked my way to this position by winning at the top level.  On Saturday night everyone will know I’m the best light middleweight in the world.  I’m going to unleash every weapon I have on him.  Everyone should tune into HBO to watch this fight.”