Klitschko and Banks channel Kronk spirit in preparation for Wach 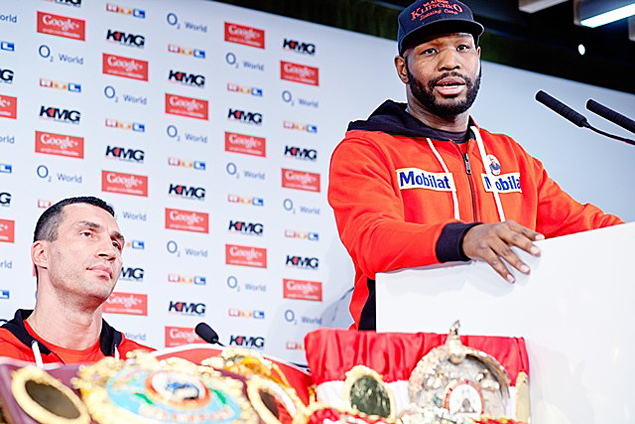 Wladimir Klitschko and new trainer Johnathan Banks, a heavyweight prosepct and disciple of Emanuel Steward, prepared for Klitschko’s heavyweight title defense against Mariusz Wach with the spirit of their dearly departed mentor

For the first time since 2004, RING heavyweight champion Wladimir Klitschko has had to prepare for a bout without Emanuel Steward at his side.

The untimely passing of the legendary trainer two weeks ago has necessitated major changes for the champ leading up to his title defense this Saturday against Mariusz Wach in Hamburg, Germany. Despite the loss of Steward however, Klitschko still has the Kronk Gym team alongside him. Heavyweight contender and former sparring partner Johnathon Banks has stepped in to fill his former mentor’s shoes.

In some ways, Klitschko says, it feels as if Steward never left.

“His spirit is with us, I know he’s around us and he’s laughing and enjoying himself, and he’s also looking forward to the fight,” said Klitschko (58-3, 50 knockouts)during a media conference call Wednesday afternoon. 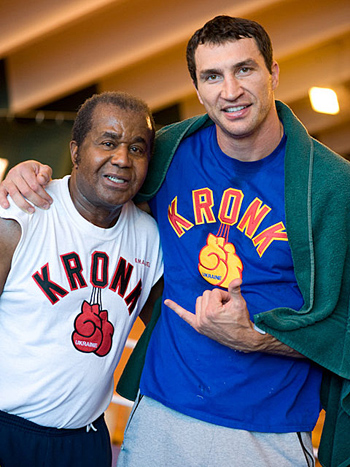 During their partnership, the Ukrainian went 17-1, only losing the first bout he ever worked with Steward to Lamon Brewster. Since then, he has blossomed into one of the most dominant champions at any weight class in the history of boxing.

According to him, the key changes Steward made were not mechanical at all, but rather strategic ones pertaining to every fight.

“Emanuel Steward is a genius in the ring,” Klitschko declared. “We basically would write a script in preparation, and the script was played in the fight. We were analyzing everything. How the opponent talks, how the opponent walks, what were the most common things they repeated, the strong sides of the opponent, the weak sides, and we were using it.”

In Banks, Klitschko is working with a Steward disciple and someone who has been in camp with him for many years. Recently, fellow Kronk trainer Jevon “Sugar” Hill told RingTV.com that Banks (28-1-1, 18 KOs) would often take the lead and run portions of Klitschko’s camp during times when Steward had obligations with other fighters.

There have been questions about his ability to focus this time around though, as the 30-year old has an HBO-televised fight of his own next week against Seth Mitchell.

“I don’t feel any added weight. I’m in boxing, I love boxing, I love what I do. There’s no pressure because boxing’s what I’m into. It’s not like I’m training a fighter for a golf tournament and I’ve got a fight coming up,” said Banks.

During his run as a heavyweight, Banks has been a fixture on Klitschko undercards, a perk to being the chief sparring partner for the champion.

Clearly he knows a thing or two about who works well in that particular role.

The 6-foot-7 Wilder was a sage addition to the sparring rotation, as he is one of the few competent heavyweights operating who are taller than Klitschko – a situation Wlad will encounter on Saturday against Wach.

Adding to the unfamiliarity of the buildup is the fact that Wach has actually tried to antagonize Klitschko, something virtually every opponent other than David Haye has shied away from throughout the years. During a recent open workout, Wach had his trainer tape a photo of Wladimir on either one of his focus pads.

“They’ve been hitting my face lots of times. It’s been quite entertaining to watch,” he said. “But on Saturday night, he’s going to face the real Wladimir Klitschko, not just images on the pads.”

Following the bout, Wladimir will make the trip to Detroit for Steward’s funeral on November 13. The ceremony will be held at the Greater Grace Temple.

Until then, the pair plan to channel what Wladimir refers to as the “Kronk spirit,” and keep their own as positive as possible.