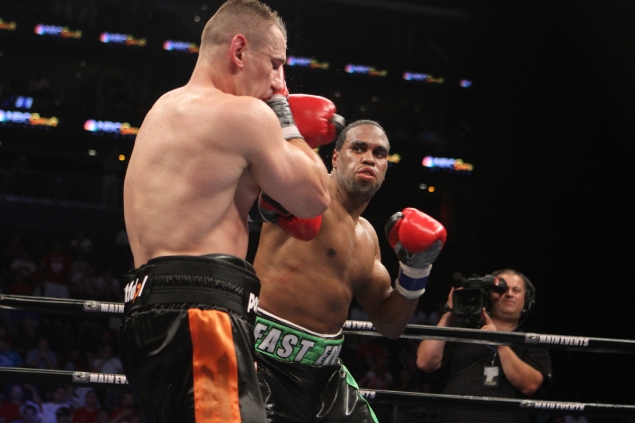 Former heavyweight contender Eddie Chambers, of Philadelphia, who is coming off June’s unanimous decision loss to Tomasz Adamek, has signed with Main Events and will campaign as a cruiserweight, the company’s president, Kathy Duva, announced on Wednesday.

“The cruiserweight division is better because I’ll be fighting guys my size,” said Chambers, who injured his left bicep midway through the opening round against Adamek. “I may have had some advantages at heavyweight, but imagine me at cruiser, fighting against someone my own size.”

Prior to facing Adamek, Chambers was knocked out in the 12th round by RING Champion Wladimir Klitschko in March of 2010, and had not fought since scoring a unanimous decision over Derric Rossy in February of last year.

“I don’t think anyone in the cruiserweight division can beat Eddie Chambers, period,” said Duva. “We are very happy that he has decided to work with us towards his goal of winning the cruiserweight title and I have no doubt in my mind that he will get there very soon.”

Chambers was scheduled to face southpaw contenter Tony Thompson for the right to challenge Wladimir Klitschko again before citing a back injury and pulling out of their initial IBF eliminator bout that was slated to be televised on Showtime in October of last year.

Thompson-Chambers was then rescheduled for December of last year, but Chambers told IBF officials that he could not participate on that date either, making Thompson the mandatory challenger to Wladimir Klitschko.

Chambers was also set to face Sergei Liakhovich, of Russia, in January of last year before suffering a broken rib in sparring that forced him to withdraw from that bout.

“I want to be a world champion. That’s what you set out to do when you start boxing. That’s what I want to be, and I’ve worked my entire boxing career, and most of my life, at that. I want to achieve it,” said Chambers.

“I see that title belt wrapped around my waist. I think it’s a great opportunity. Main Events puts on nothing but great fights. I’m just happy to be part of it. They really have confidence in my ability, and it led me to believe that these were the people for me.”