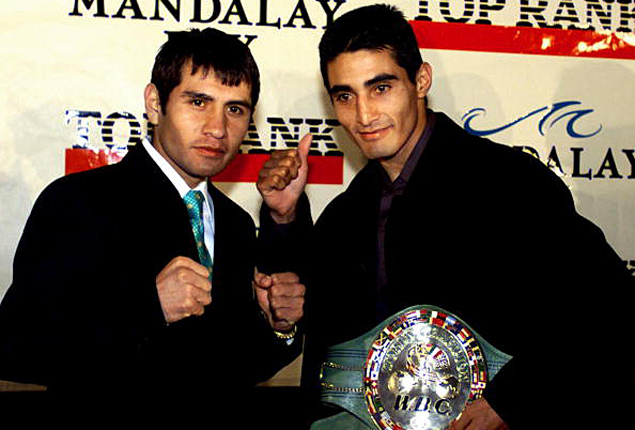 The first bout between Marco Antonio Barrera and Erik Morales, both of whom were in their primes, is one of the best 122-pound title bouts of all time. Is their 2000 thriller, narrowly won by Morales, No. 1? Read on and find out.

When the 122-pound class was revived after a 53-year hiatus in 1976, those in power couldn’t have known the greatness that would be unleashed over the next three-and-a-half decades. The assembly line of fantastic fights have vaulted what could have been an obscure outpost for misfit bantamweights and featherweights into one of the best and most important weight classes in boxing.

That proud tradition will continue Saturday when Abner Mares puts his newly acquired WBC belt on the line against longtime WBA 118-pound titleholder Anselmo Moreno, who opened eyes with his superb performance against Vic Darchinyan last December and his nine round destruction of once-beaten David de la Mora in April. Their polished styles should make for excellent viewing for both the cognoscenti and the common man.

If Mares and Moreno seek to create one of the 10 greatest 122-pound title fights ever waged, however, they have an extremely high bar to clear. That’s because in terms of action, violence, drama and suspense, the junior featherweights (or super bantamweights, if you prefer) have delivered like few other weight classes. Whittling down the candidates to a mere 10 was quite difficult, so along with those that made the cut a multitude of “honorable mentions” will be listed at the end.

So without further delay, here is one man’s list of the 10 best 122-pound title fights in history: