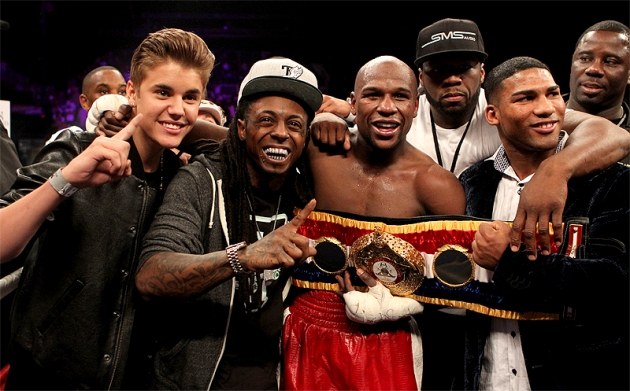 “GAMBOA WANTS TO FIGHT FLOYD. I will put up a extra 20 million for the winner…,” Jackson wrote, along with, “I can’t hang out with Floyd no more,I’m tired of running from Manny Pacquiao.”

Mayweather retorted even more viciously from his account in what will apparently be an ongoing feud.

Jackson had earlier indicated that he was separating from Mayweather and scrapping plans for their joint promotional company, TMT (“The Money Team”) Promotions.

Instead, Jackson has formed his own banner of SMS Promotions, under which Gamboa (21-0, 16 knockouts) is targeted for a bout against Miguel Beltran Jr. (27-2, 17 KOs) at the MGM Grand in Las Vegas on Top Rank’s Dec. 8, HBO-Pay Per View-televised fourth bout between Manny Pacquiao and Juan Manuel Marquez.

Jackson also has IBF featherweight beltholder Billy Dib (35-1, 21 KOs) in line for a potential clash with Puerto Rico’s unbeaten Jayson Velez (19-0, 14 KOs) on the Showtime-televised undercard of the Dec. 1 Miguel Cotto-Austin Trout fight that is promoted by Golden Boy Promotions, according to Cotto’s attorney and legal advisor, Gaby Penagaricano, who is is working in a similar capacity on behalf of Dib.

“TMT is over. The money team is no longer a team. So it’s SMS Promotions…. that’s it, that’s all. I’m no longer a part or down with TMT Promotions. SMSaudio,” wrote Jackson, whose call letters, “SMS,” represent his audio head phones line.

“If anyone wants a Money Team jacket, I’m selling mine for a dollar. The nap back hat comes with it. That’s a fair price. SMSaudio. I moved the fighters to SMS Promotions cause the other half of ‘the money team’ didn’t put up their $MONEY.”

In response to Jackson, Ellerbe told Fighthype.com, in part, “Let’s be clear on this, Floyd Mayweather is The Money Team, and he’s always been The Money Team. He’s the beginning, the middle and the end of The Money Team.”

“Floyd Mayweather has been getting money long before anybody ever came around him and he will continue to get money for the rest of his life because he is the best. Not one of the best, but the best at what he does, and continues to be the best after a decade and a half. That’s why he’s the highest paid athlete in all of sports,” said Ellerbe.

“In my opinion, I’m sure Top Rank is very, very happy and laughing their a**es off to be doing business with SMG Promotions. They got paid a whole bunch of money to release the fighter [Gamboa], they get to keep the money, and still get to use the fighter. Way to go SMG. And Billy Dib is a world champion and a very nice guy, but I’m sure he didn’t sign up with SMG to be the opponent for, no disrespect, an unrated prospect on somebody else’s show. But we wish them nothing but the best in their new promotional venture.”

Ellerbe’s counter has touched off a series of Twitter vollies from Jackson, among them, “Ellerbee you a broke bum. GAMBOA want to fight Floyd tell him lace up,” and, “If you say Floyd a kill GAMBOA tell him [to] fight,” as well as, “GAMBOA MOVING UP IN WEIGHT FLOYD. You should have know not to go against me PUNK.”

Later, Mayweather got even more personal, posting a photo of Jackson holding his title belts, and referring to Jackson’s being shot in 2000.

“A male boxing groupie.. hold my belts because your album sales have declined…,” wrote Mayweather. “I respect the shooter, not the one who got shot.” 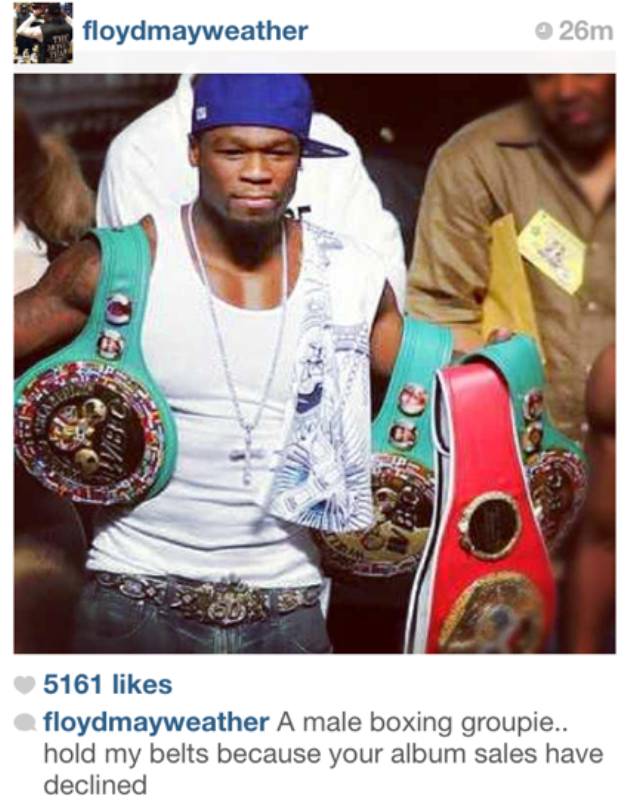 Jackson’s promotional application under the banner of SMS Promotions was received last month by Nevada State Athletic Commission executive director Keith Kizer, who said that he expected it to be the subject of the NSAC’s mid-November meeting “around Nov. 15.”

Jackson had been attempting to become a promoter with Mayweather, but that is apparently no longer the case, as Mayweather is not listed in the information provided, according to Kizer.

Jackson already has obtained a license in New York, according to New York State Athletic Commission director Melvina Lathan. Kizer said the NSAC would be “looking for three things” in regard to an applicant’s qualifications for being a promoter.