LOS ANGELES – Amir Khan and Carlos Molina is a mismatch on paper.

Khan (26-3, 18 knockouts), who fights the 26-year-old Southern Californian in a Showtime-televised junior welterweight bout on Dec. 15, is former a world-ranked former WBA and IBF 140-pound titleholder.

However, given the current circumstances of Khan’s career, the scheduled 12-round bout is an interesting fight. The 25-year-old Bolton, England native is coming off of back-to-back losses – a fourth-round knockout to Danny Garcia in July and a majority decision to Lamont Peterson last December – and has recently left Freddie Roach, his coach of the past 3¾ years, to train with Virgil Hunter.

This isn’t the first time Khan’s career was in “comeback” mode. After suffering a shocking first-round knockout to Breidis Prescott in 2008 many fans and media on both sides of the Pond branded the 2004 Olympic silver medalist a “hype job.”

Khan, with Roach’s help, proved otherwise but his first opponent after the Prescott loss was Oisin Fagan, an Irish journeyman and fulltime school teacher in Oklahoma. Molina, a U.S. amateur champ and fulltime pro since 2007, is definitely a step-up in terms of comeback opponents.

“He could have taken an easier fight,” Golden Boy Promotions president Oscar De La Hoya said during Tuesday’s kick-off press conference at the L.A. Sports Arena, where Khan-Molina takes place, “but he chose an undefeated fighter, one who is going to come to fight, especially in front of his family and hometown fans.”

Molina is indeed motivated by the opportunity to fight the British star. The squat boxer-puncher said he didn’t think twice about taking the fight.

“The fight took two days to be made from my end,” Molina told RingTV.com. “My manager, Frank Espinoza, called me in late September. He asked me if I would be interested in fighting Amir Khan. I said ‘Hell yeah!’

“A day later, he called me while I was at my mom’s house. He said ‘You got it.’ I said ‘Frank, I love you.’ I was so excited that I went running after I told my family. I didn’t sleep for two days I was so happy.”

Molina, who stands 5-foot-6, is at least four inches shorter than Khan, who is rangier, faster and more explosive. Yet, the Angelino exuded confidence at the press conference.

“Khan’s got a good jab, fast hands and he’s a good overall athlete, but he has flaws,” Molina said. “He drops his hands whenever he punches in combination. Sometimes he lunges in and he tends to fade in the later rounds.”

Khan, to his credit, is aware of his flaws. He says the move from Roach and the hall of famer’s famous Wild Card Boxing Club in Hollywood, Calif., to Hunter and the 2011 Trainer of the Year’s private gym in the Bay Area was his way of correcting those flaws. 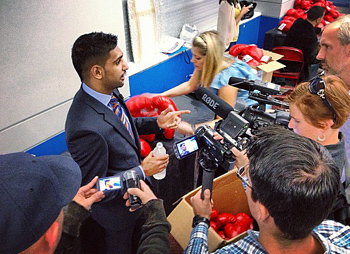 Khan does not believe the transition from Roach’s offense-oriented style to Hunter’s more-technical teachings will hamper his performance on Dec. 15.

“Virgil is a different kind of coach,” Khan told a small group of writers after the presser. “He makes you understand what you need to in order to win a fight.

“I won fights with Freddie but I had been fighting with my heart a little too much. Like Oscar said (during the press conference), I can fight with half the heart I usually do and still be an entertaining fighter. What I need to start using is my brain.

“I make mistakes in my fights. A lot of times it’s because I’m too ahead of myself. I’ve been working with Virgil for the past month and he’s seen it in training. He tells me to slow down because I’m rushing.

“I was rushing myself in the Garcia and Peterson fights. I believe 100 percent that I would have won those fights had I settled down and used my head more.”

Khan says the atmosphere of Hunter’s private gym is conducive to slowing down and learning.

“It’s a quiet, isolated gym,” he said. “It’s not so busy, so there’s time to think. Virgil keeps a limit on who comes in. Everyone is familiar with each other. There are no strangers looking at you when you’re working out and sparring.

“When you’re in a loud, busy gym full of onlookers, sometimes you start to perform for the people watching. That doesn’t happen in Virgil’s gym. I’m listening to him.”

If it sounds like Khan is planning to box a safety first fight on Dec. 15, don’t worry. Molina plans to make him fight.

“I never want to be in a boring fight,” Molina said. “It’s going to be an exciting fight because I have a lot of heart and I know Khan has a lot of heart, but he’s going to be surprised by my speed. I’m a boxer-puncher and I’m a good counter puncher.

“We’re both going to be smart in there but it’s going to come down to will.”

Molina is convinced that his will can override that of Khan, who he met during a Golden Boy Promotions turkey giveaway last November.

“He’s a nice guy but he has my ticket to a world title, so I’ve got to rip his head off.”