Froch: Mack could be last fight at home

Three-time title-winner and current IBF super middleweight beltholder Carl Froch believes that his Nov. 17 defense against Philadelphia’s Yusaf Mack could be his final fight before his hometown fans at Capital FM Arena in Nottingham, England.

The victory over Bute helped Froch to rebound from a loss in December to Andre Ward for the RING, WBA and WBC belts. Froch’s only other setback was against Mikkel Kessler in April of 2010.

“If the Bute fight happens, it will be in Canada,” said Froch, 35. “And rematches with Ward and Kessler could well happen in America and Denmark, so this could well be my last fight in Nottingham.”

Froch-Mack is a main event promoted by Matchroom Boxing which is entitled, “True Brit,” and which will be televised in the United States on Integrated Sports Pay Per View starting at 3 pm ET/noon PT.

Froch won the WBC’s vacant belt by decisioning Jean Pascal in December of 2008, lost it the same way to Kessler, and regained it by dominating ex-middleweight beltholder Arthur Abraham in November of the same year.

Froch faced Bute in Nottingham for the first time since October of 2009, when he split-decisioned Andre Dirrell in the first round of Showtime’s Super Six World Super Middleweight Classic Tournament, during which he also dominated ex-beltholder Glen Johnson by unanimous decision in June of last year before losing in the title bout to Ward.

Froch’s 12th-round stoppage of former undisputed middleweight titleholder Jermain Taylor in April of 2009, one bout before facing Dirrell, was the first defense of the crown he won from Pascal.

“I’m in fantastic shape and itching to get in there again,” said Froch. “The Bute fight was special, and the best night of my career, But there’s no chance I’ll take my foot off the pedal on Nov. 17.” 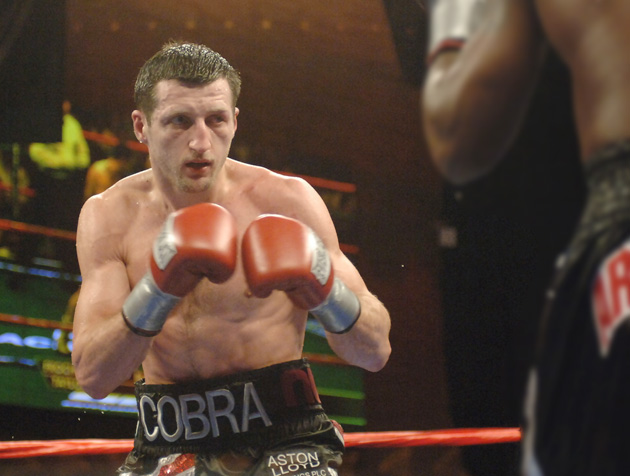 A light heavyweight since 2008, Mack, 32, has suffered knockout losses to Alejandro Berrio and Librado Andrade in the sixth and seventh rounds as a super middleweight in 2006 and 2007, respectively.

Mack was also stopped as a light heavyweight by Johnson and current IBF titleholder Tavoris Cloud in the sixth and eighth rounds in February of 2010 and in June of last year, respectively. Mack has since earned decisions over Omar Sheika and Sabou Ballogou in April and July.

“Yusaf is a dangerous customer, and he has nothing to lose coming here and everything to gain,” said Froch. “Yusaf has fought for a world title at light heavyweight, and he is going to be doing everything he can to prove himself at super middleweight.”

Also on the card is light heavyweight Tony Bellew (18-1, 12 KOs), of Liverpool, who has scored knockouts in the fifth and ninth rounds over Danny McIntosh and Edison Miranda in April and last month, respectively, to bounce back from a majority decision loss to WBO beltholder Nathan Cleverly in October of last year.

Bellew has a WBC eliminator bout with Argentina’s hard-hitting Roberto Feliciano Bolonti (30-1, 19 KOs), a winner of 26 consecutive fights who is in pursuit of his sixth straight stoppage win. Bolonti will be fighting outside of his native Buenos Aires for the first time.