It isn’t easy for any boxer to move their career without a promoter; it’s much more difficult when you’re a female boxer. Just ask Jennifer Han.

Han is a well-regarded upcoming boxer from El Paso, Texas, but the relative lack of organization in the pro ranks – where American promoters are often reluctant to book female fights – has made her journey an often frustrating one.

Han (8-1-1, 1 knockouts), a junior lightweight who fights this Saturday against Claudia Gutierez (2-1) in a four-round bout at the El Paso County Coliseum, is in action for just the second time this year after a busy 2011 that saw her compete (officially) six times.

The six-time national amateur champion with a degree in kinesiology from the University of Texas at El Paso (UTEP) admits the transition to the professional ranks hasn’t always been rosy. 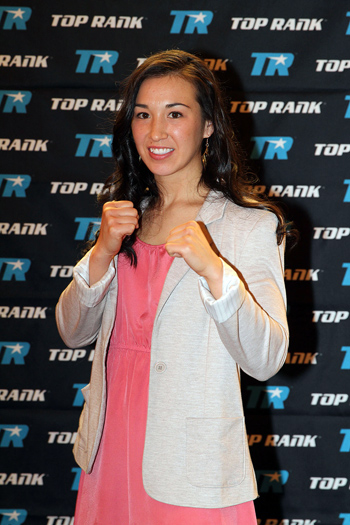 “When I was fighting in the amateurs, it was so much easier to just go to the tournaments,” said Han, 29. “If there’s someone in your weight class, you got competition. In the pros I thought it was going to be easier to get fights, you get paid, it sounds great. But I didn’t realize the reality where, you have to beg the promoters to get on the card, then hope they don’t use you as an opponent.”

Han isn’t one to get discouraged, however. Fighting is in her blood. Her younger brother Abraham Han (17-0, 11 KOs) is a junior middleweight prospect who will fight in an eight-rounder against Arsenio Terrazas (9-2, 8 KOs) on the same card. Heather’s two younger sisters – twins Stephanie and Heather – are amateurs, as is her brother Israel.

The event, which is promoted by Top Rank, will be headlined by former IBF 122-pound titleholder Takalani Ndlovu facing Alejandro Lopez in an IBF eliminator, as well as prospects Glen Tapia, Matt Korobov and Brad Solomon in separate bouts.

Boxing wasn’t Han’s first intro to fighting. Her father Bae Hyun Han, a martial arts expert, trained all of his children in Tae Kwon Do.

“He’s all about women being independent, strong, he’s never held us back,” said Han of her father’s willingness to train her in martial arts.

From there, Jennifer and Abraham moved to kickboxing, competing for the now defunct World Combat League, which televised their contests on the Versus network.

But once the Chuck Norris founded WCL went belly up, kickboxing matches were hard to come by. That’s when Han sought out traditional boxing.

Han lost a majority decision in her pro debut to Melissa St. Vil in 2009, then drew in her second bout. She has won all eight bouts since then.

For this fight, Han will be working with new trainer Louie Burke – trainer of WBA junior middleweight titleholder Austin Trout – for the first time. Prior to that, Han had trained independently in the gym, having not replaced her original trainer, who had died when she was an amateur.

“Now that I have Louie I’ve seen so much improvement,” said Han, who drives an hour each way with her brother Abraham from El Paso to Las Cruces, New Mexico to train with Burke.

Han admits there was an initial adjustment phase that had to be worked through with her and Burke.

“I think it was difficult for him at first, training girls, I don’t think he was very comfortable with it because he had never done it before,” said Han. “But as of now, he’s changed his perspective and realized the girls train just as hard as the guys and we’re just as confident and take it seriously. So I’m very lucky to have him work as my trainer.”

Guiding her career is veteran women’s boxing manager Luigi Olcese, who also helped Alicia Ashley and Maureen Shea find world title success. The New York-based Olcese says that matching women’s fights isn’t always an exact science, but is confident that Han will get by Gutierrez on Saturday and move to greener pastures.

“We don’t know anything about her but what works in our favor is Jennifer’s experience,” said Olcese. “In female boxing, records sometimes don’t mean as much as one might think. A change of team can drastically improve a boxer. Some stay in the gym and improve tremendously without necessarily getting the chance to fight.

“If she comes out okay this Saturday, we will look for the right opportunity to fight for a major bout for her.”