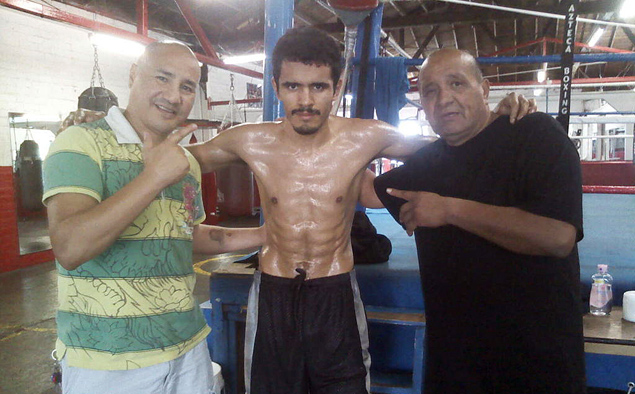 Miguel Vazquez is by far the most advanced and accomplished fighter in action on Saturday’s Boxing After Dark tripleheader from Verona, N.Y., but the IBF lightweight titleholder is opening the HBO broadcast (10:15 p.m. ET) against Marvin Quintero.

Both are good fights, but they aren’t championship bouts and they don’t involve fighters who are considered world class (yet). Vazquez, THE RING’s No. 2-rated lightweight, isn’t well known but he’s world class. The cagey technician makes the fourth defense of his IBF title against Quintero, a southpaw puncher who has scored five knockouts since being KO’d by Daniel Attah in November of 2010.

Vazquez (31-3, 13 knockouts) has a much-better streak. The Guadalajara native has won 10 in a row since dropping a 10-round decision to Saul Alvarez in 2008. Among his recent victories are decisions over then-undefeated bangers Breidis Prescott and Leonardo Zappavigna. However, his fight with hard-punching Quintero is so under-the-radar even Boxrec.com had failed to list it as of Wednesday evening.

Vazquez isn’t offended by Boxrec’s omission or his low placement on HBO’s tripleheader. The humble titleholder is happy to be on a high-profile American broadcast and he’s anxious to make the most of his exposure. 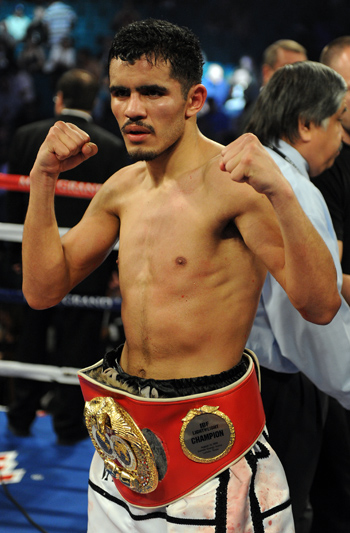 “I’m looking forward to this fight,” Vazquez told RingTV.com through adviser Richard Mota on Monday, the final day of his training camp at Azteca Boxing Club in Bell, Calif.

“I know that Quintero is strong and aggressive, so he will make for a good fight. His southpaw stance might be difficult in the early rounds but I’m well prepared for him.”

Mota views the B.A.D. opener as an audition for future HBO-televised bouts. Vazquez was briefly considered as an opponent for highly touted American standout Adrien Broner on a Nov. 17 Championship Boxing headliner before better-known WBC lightweight titleholder Antonio DeMarco made a stronger case by blasting John Molina in one round last month.

With a good showing against Quintero, Mota believes Vazquez could position himself to face the DeMarco-Broner winner in a partial title unification bout in 2013.

That sounds good to Vazquez, but he admits that he needs to raise his profile in the sport and that he must earn those kinds of high-profile bouts. HBO exposure is a good start, he said. He’s not in a rush. At 25, he knows time is on his side.

“First I have to defend my title against Quintero,” he said. “Then there’s talk that I could fight (unbeaten prospect) Mercito Gesta on the (Manny) Pacquiao-(Juan Manuel) Marquez pay-per-view undercard (Dec. 8).

“That’s another good fight for me. Mercito is fast and strong and undefeated. He has a little bit of a name, so I look at him as someone who can help me get to the really big names.”

When asked who he considered to be the “really big names,” Vazquez skipped the DeMarco-Broner winner and went straight for the top dogs of the junior welterweight division.

“Danny Garcia, Brandon Rios and Mike Alvarado,” he said. “I can still make lightweight but I think there are better fights for me at 140 pounds. I would stay at 135 if I were offered a fight against someone like Broner or (Yuriorkis) Gamboa.”

If Vazquez does toss his hat into the 140-pound mix next year it won’t be uncharted territory for him. The first 25 bouts of his pro career were fought at junior welterweight and welterweight.

His only losses are four-round and 10-round bouts to Alvarez, who now holds the WBC 154-pound belt, and a 10-round junior welterweight bout to current WBO welterweight titleholder Tim Bradley in 2007.

He’s never been defeated at lightweight, the division his current coach, Javier Capetillo, suggested he fight at shortly after his rematch loss to Alvarez.

“I met Miguel in Guadalajara four and a half years ago, after (Antonio) Margarito fought (Miguel) Cotto,” said the controversial trainer, who was banned from working corners in the U.S after being caught loading Margarito’s hand wraps before the Shane Mosley fight in 2009. “I saw his body structure and knew right away that he was fighting too heavy.

“The first thing I told him was ‘What are you doing fighting at welterweight? You’re a lightweight!’ He told me he’d never fought that light. I told him ‘Then you don’t work hard enough.'”

Vazquez joined Capetillo’s stable of fighters in Southern California in late 2008 and hasn’t looked back.

“I’m with a great team that includes Javier, Richard, my father, and Cobrita (former WBC featherweight titleholder Alejandro Gonzalez),” he said. “We have been successful because we work very hard. The most important thing is that I have God’s blessing. All of my hard work is dedicated to God.”

Vazquez is a devote Christian, who Capetillo says is a dream to work with. 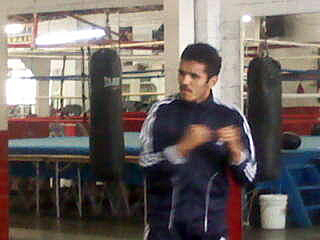 “He lives clean, no smoking, no drinking, no chasing women,” Capetillo said through Mota. “And I don’t have to push him to give me 100 percent. He gives me 120 percent. He could fight 15 rounds. I won’t say that about many of today’s fighters.

“I think he can have a long, successful career.”

If Vazquez does enjoy an extended pro career he can thank Capetillo for getting him into top condition, but he’ll also owe it to his underrated boxing ability, which was developed during his amateur career.

Vazquez, who began boxing at age 12, compiled a 70-10 amateur record before turning pro at 19. His father, Miguel Vazquez Sr., gave him his foundation but his technique was advanced by visiting Cuban amateur trainers who helped coach Mexico’s national team during his late teens.

“The Cuban system taught me good fundamentals,” he said. “They also had good conditioning exercises and even taught us how to punch with more power. Some of the things I do now, I learned from Cuban coaches, like Antonio Crespo.

“One technique is the art of attacking with the jab while being in position to counter with power punches.”

Vazquez plans to use these techniques against Quintero on Saturday, and if successful, against bigger and better opponents in the near future.

He won’t be looking for revenge against Alvarez or Bradley, though. Vazquez knows his limitations and realizes that he shouldn’t fight any heavier than 140 pounds.

“My first fight with Canelo was at 140 pounds,” he said. “It was my pro debut; he had four fights but I sincerely believe that I did enough to beat him. I lost a split decision. He won the rematch, which we fought at 148 pounds. The weight was too much and he was too strong.

“I also legitimately lost the Bradley fight. I think won a few rounds. I might have hurt him with a body shot in one round, but after 10 rounds I knew I lost.