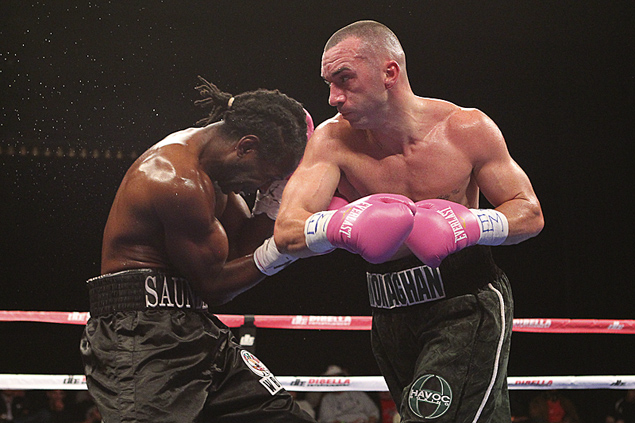 Monaghan, a Long Island native who might be the biggest local draw on the New York club scene, used aggressiveness to compensate for his lack of speed. His impressive workrate kept Saunders (22-18-2, 9 knockouts) on the defensive.

Saunders has the word “war” emblazoned on the back of his trunks but it might as well have read “survive,” as he never truly asserted himself.

In the final round, Saunders, from Pittsburgh, opened up with a decent right cross but was quickly dissuaded from taking more risks as Monaghan (16-0, 10 KOs) landed a hard left hook-right hand that had the crowd chanting, “Seanie!”

Monaghan’s trainer, Joe Higgins, was pleased with the performance.

“We had him hurt a couple times, but Sean stayed with the game plan, which was to box the guy the whole fight and possibly go 10,” said Higgins, who trains Monaghan out of the Freeport, Long Island Police Athletic League.

“We knew he would be a hard guy to knock out. Do we want to get a knockout? Sure we do, but I’ll take a clean win like that against a durable journeyman any day.”

Monaghan, 31, had a limited amateur career of 15 bouts and is still learning on the job.

Also Wednesday, Ukrainian lightweight Ivan Redkach (12-0, 11 KOs) needed very little time to get back to the dressing room after scoring a first-round technical knockout of Tebor Brosch (7-4-5, 2 KOs) of Mississauga, Ontario, Canada at the 2:07 mark. Redkach, 26, was a 2008 Olympic alternate in his native country. 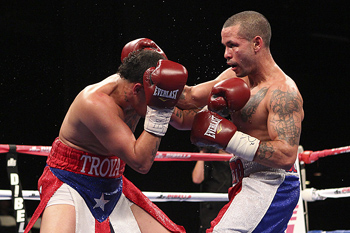 Cruz, who has lost to both Michael Angelo Perez and Jose Miguel Cotto, showed some signs of ring competence early on.

But the skillful pressure of Bracero (20-1, 3 KOs) broke him down physically, opening a bad cut on the bridge of his nose. Bracero’s jab and straight right hand were the dominant punches of the fight.

A two-time New York Daily News Golden Gloves champion, Bracero saw his budding career interrupted from 2002-2009, when a series of criminal charges stemming from a robbery sent him to prison for six years.

Bracero has remained active since then, inflicting the first defeats to previously unbeaten boxers Danny O’Connor  and Winston Mathis before losing a unanimous decision to former junior welterweight titleholder DeMarcus Corley in January.

Bracero has now won two straight since then.

Pagliara, 33, came to the United States in 2009 from Cecina, Tuscany, Italy after a knockout loss in his hometown in hopes of reviving his stagnating career.

Pagliara has now gone 4-0-2 since hooking up with trainers Tommy Gallagher and Don Saxby in Gleason’s Gym.

“I come here for my dream, it’s going to come true for sure. I want to be a world champion,” said Pagliara, 33.

In a four-round clash between female featherweights, Heather Hardy (2-0) and Unique Harris (0-1) of Philadelphia channeled the Christy Martin vs. Dierdre Gogarty war of 1996, exchanging blows in close quarters for four rounds.

At the end, Hardy’s right eye was cut, and Harris’ nose, bloodied. But Hardy’s superior conditioning pushed her to a unanimous decision victory by the scores of 39-37 twice and 40-36 once.