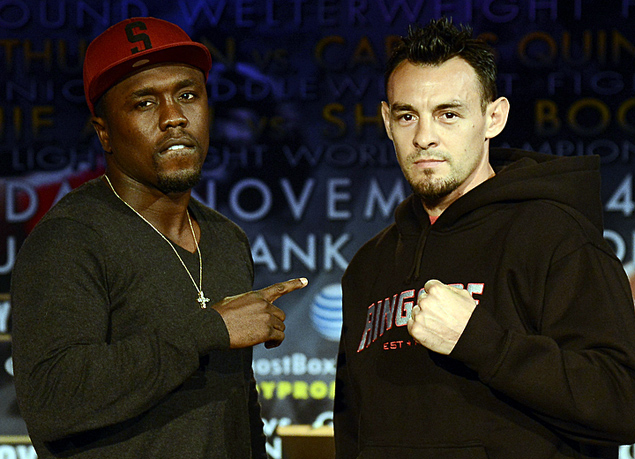 The Andre Berto-Robert Guerrero welterweight showdown is viewed by many as a proving ground for both fighters, but the young veterans maintain they have nothing to prove going into their HBO-televised fight.

Before the two 147-pound standouts agreed to fight in an HBO-televised main event from the Citizens Business Bank Arena in Ontario, Calif., on Nov. 24, there were well-publicized talks of both young veterans facing different opponents.

A win over Bundrage would instantly make Berto a player in the 154-pound division, where pay-per-view level bouts against the likes of Saul Alvarez and Miguel Cotto can be made. A victory over Bradley would immediately earn Guerrero the pound-for-pound recognition he’s sought for years.

However, it’s probably for the best that they face each other. Despite their accomplishments, hardcore fans and members of the boxing media have questions about both fighters that need to be answered before either declares himself to be among the sport’s elite.

Berto (28-1, 22 knockouts) hasn’t fought since scoring a fifth-round stoppage of IBF beltholder Jan Zaveck last September. Prior to that fight, Berto lost his WBC title in a fight-of-the-year candidate with Victor Ortiz.

The 29-year-old Floridian was set for a February rematch with Ortiz when a biceps injury postponed the anticipated fight until June. However, the fight was cancelled when Berto tested positive for the steroid norandrosterone.

The failed drug test, administered by the Voluntary Anti-Doping Agency (at Berto’s behest), opened the former two-time welterweight beltholder to harsh criticism from the boxing world. It didn’t help that Berto had enlisted the help of controversial supplement guru Victor Conte before the Zaveck fight.

However, Berto had extremely small amounts of the banned substance in his system, which his legal defense argued was inconsistent with any performance-enhancing effect, and in late August he obtained a California license after completing all necessary pre-licensing requirements of the California State Athletic Commission.

Still, many wonder if the inactivity and controversy will weigh on his mind when enters the ring against Guerrero, who crashed world welterweight rankings when he outboxed and outfought previously undefeated contender Selcuk Aydin in July. 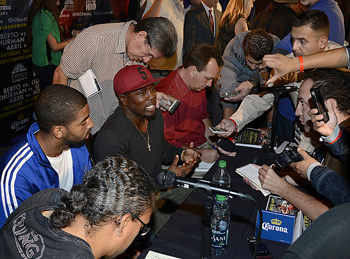 At Tuesday’s kick-off press conference for the fight at the Grammy Museum at L.A. LIVE, Berto admitted to a small group of boxing writers that he’s had a tough year but he maintains that the drug-testing ordeal is behind him.

“It was a tough situation for me and my family,” said Berto, who comes from an athletic family. “We pride ourselves on hard work. That’s it. (The criticism) hurt us and people close to us.

“I couldn’t believe it happened the way it did with no explanation for it (from VADA) to the press or the public. The way (the test results) were put out there without explaining exactly what it was and how much (was in my system) upset me. Nothing was really explained to the public so they ran with it.

“I just had to stay calm and stay away from Twitter while my legal team dealt with it, but we came to the table and went through the correct steps with the commission.”

And now Berto wants to show the world that he’s back.

“I’m excited about this fight,” he said. “I’m not worried about the layoff. I didn’t want any tune-ups because I know the level of fighter I am. On Nov. 24, you’re going to see the same power, speed and the same aggression.”

Although he just bested a strong and aggressive welterweight, many boxing observers wonder if Guerrero, who began his career at featherweight, can handle Berto’s explosive brand of speed and power.

Guerrero, who has held major featherweight and junior lightweight titles, as well as interim belts at lightweight and welterweight, bristles at that notion.

“I call that hating,” the 29-year-old native of Gilroy, Calif., said matter-of-factly. “I moved up two weight classes after a year and half off and I fought a very dangerous puncher.

“Aydin was the mandatory challenger for the WBC welterweight title for three years. Berto side stepped him. Victor Ortiz wouldn’t fight him. Floyd Mayweather wouldn’t fight him. I fought him and I got 12 hard rounds with a rough guy who punched me in the back of my head and did his best to bust me up. So I don’t want to hear that I can’t take a welterweight’s punch.” 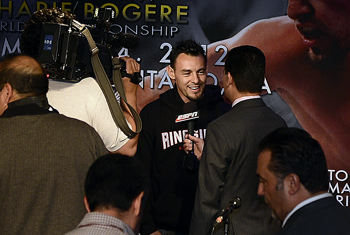 Guerrero believes, and probably rightfully so, that his welterweight credentials would be not be questioned had Aydin, a Germany based Turk who had not fought on U.S. TV prior to their Showtime-televised bout, been better known to American fight fans and media.

He adds that many of boxing’s “elite” fighters refuse to face worthy but unknown contenders in their weight classes because they know they won’t get any credit for beating them. Guerrero, who has been avoided for much of his career, says this culture of avoidance is bad for the sport.

“The pound-for-pound boxers are just looking for big names; they’re not fighting the best and the toughest fighters in their divisions,” he said. “I don’t just want money or fame. I want to create a legacy. That’s why I’ve continued to rise in weight. The top fighters at featherweight and lightweight and junior welterweight did not want to fight me.”

The list of “name fighters” who have turned down bouts with Guerrero over the years, according to his co-manager Bob Santos, is an impressive one: Chris John and Rocky Juarez at featherweight, Juan Manuel Marquez and Juan Diaz at lightweight, Amir Khan at junior welterweight, and now Bradley at welterweight.

Berto is the first world-class fighter regularly featured on HBO to accept a fight with Guerrero, who promises to be at his best on fight night.

“Beating Berto is about legacy,” he said. “I want to leave a mark by beating the best out there. I have to do everything well to do it. You can’t do just one thing well against Berto because he can change the fight with just one punch, but he’s never faced a fighter like me, or a lefty like me.

“The toughest southpaw he’s faced so far, Ortiz, beat him, and that was a one-dimensional fighter with bad footwork. He says he’s hungry for this fight. I’m always hungry.”

Berto believes fight fans are hungry for a new face in the 147-pound division, which has been dominated by two superstars – Mayweather and Manny Pacquiao – who refuse to fight each other.

“The division is wide open,” he said. “Fans are waiting for someone to step up.”

The winner of Berto-Guerrero takes an important step do forward in their career.