Cunningham and Adamek at it again, this time on network TV 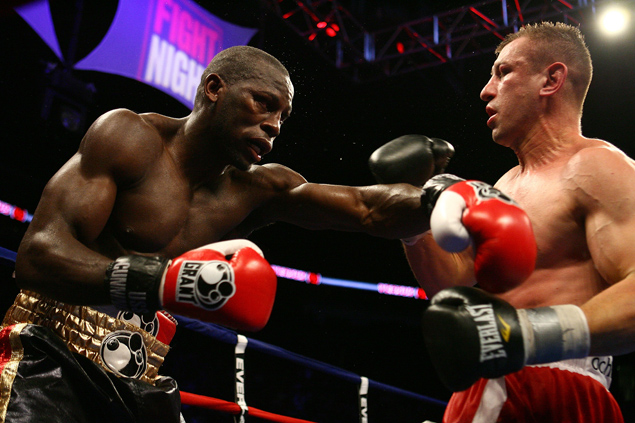 Cunningham’s time has arrived, and he’ll be getting his chance to avenge the 12-round split-decision loss that wrested the IBF cruiserweight belt from his waist, when he and Adamek do it again on Dec. 22at the Sands Casino Resort, in Bethlehem, Penn.

This time both fighters will climb into the ring as heavyweights for the fight that will take place in the 4:00-6:00 p.m. time slot on Saturdayon the NBC network. It will mark the first fight on network TV in that time slot in well over 20 years, announced Main Events’ Kathy Duva at the press conference announcing the fight at the Wisla Club.

“That’s a big, big thing, a giant milestone we’re crossing in the sport,” Duva said. “We hope this is the first of many fights we get to see on network TV. We’ve had a great relationship with NBC this past year. This will be our seventh show with them, with the biggest difference is that this one will be on the network.

“I don’t know how different a fight this could be at heavyweight than the first one. It’s why I want to watch this one and see what happens. (The) time slot is exclusive and it’s a very sweet place, for the time and the date. People will be home and it’s the holiday season and it’s a great opportunity.”

Duva said NBC came to Main Events and offered the afternoon time slots, a cherished spot on a holiday weekend with little sports to compete against.

“It’s why I know this fight will deliver and people will stop and watch,” Duva said. “In the end, we want them to do this again and I feel we got the best fight we possibly could to ensure that it will happen. I wouldn’t characterize this fight [as the loser goes home]. But the winner will move on to fight Wladimir Klitschko, and both fighters will certainly be stepping in much different directions.”

It will be four years and 11 days since Adamek (47-2, 29 knockouts) and Cunningham (25-4, 12 KOs) engaged in their first dual, a great back-and-forth affair for the IBF and THE RING magazine cruiserweight championships.

Cunningham was knocked down three times, yet managed to outbox and outwork Adamek enough to lose a narrow split decision.

This will be the 36-year-old Philadelphian’s second heavyweight fight. He’ll come in a little wiser than he was the first time in facing.

“I’ve waited for so long that we thought the first fight should have been picked up by HBO or Showtime in the rematch,” Cunningham said. “It was frustrating, waiting. You know that fight was good, and being a part of it, hearing good fights get you on HBO and Showtime. That’s what I felt me and Adamek did the first time. We couldn’t any of the network shine for a rematch.”

Adamek is rebuilding since his 10th-round stoppage loss to WBC heavyweight titleholder Vitali Klitschko, winning three straight. But during the course of those three victories, Adamek survived some serious trouble in the opening minute of his most recent victory, a fifth-round stoppage over Travis Walker on Sept. 8.

“I know Steve is hungry, because he waited four years to face me again,” Adamek said. “I’m sure he may be a little different fighter than I remember the way he was four years ago, but I’m a little bit different, too. I think I’m stronger at heavyweight. I had to lose weight to make cruiser. I feel better at heavyweight.”

“I’m smarter than I was the first time he met,” he said. “I’m still hungry and what makes me even more hungry is this NBC limelight is something I need. I thought even without one of the knockdowns the first time we fought, I thought that fight should have at least been a draw. Each time I look at the tape, I get mad.

“I win this fight today. The main difference is we’ve both changed and changed for the better. It’s one of those fights where the loser has to pick up his blocks and go back to the lower playground. It’s why I’m going into this with a special sense of urgency. I have to be the best Steve Cunningham and Adamek will pull it out of me.”