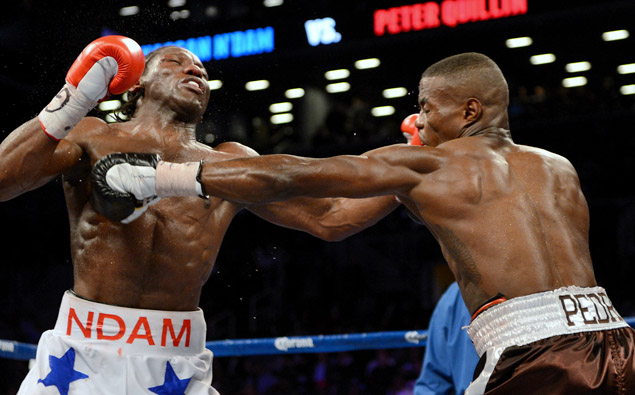 “I would like to make a point about Eric Brown. He’s a great trainer,” said Malignaggi. “He should get a lot of credit. He trains Kid Chocolate and he trains me.”

Malignaggi, 32, came up with his fifth straight victory since rising into the welterweight ranks when he defeated Cano. Malignaggi has not lost since falling by 11th-round knockout to Amir Khan as a junior welterweight in May of 2010.

“Eric’s keeping the Wild Card on the right track,” said Roach, a five-time BWAA Trainer of The Year. “I’m very happy for him, he did a great job and he represented the Wild Card well.”

In April, Brown guided Malignaggi to a ninth-round stoppage on the home turf of Ukrainian Vyacheslav Senchenko, who was bigger, taller, boasted more power and had worked at times with Roach.

“So that’s Eric Brown, and now he’s taken another fighter to a world championship in Kid Chocolate. So when people give their votes for Trainer of The Year, you have to give Eric Brown serious consideration. He’s flown under the radar a number of years, but he’s worked with me, and he’s worked me hard, and we’ve worked on a lot of technique and a lot of different stuff, and I think he’s going to just continue to be in the public eye.” 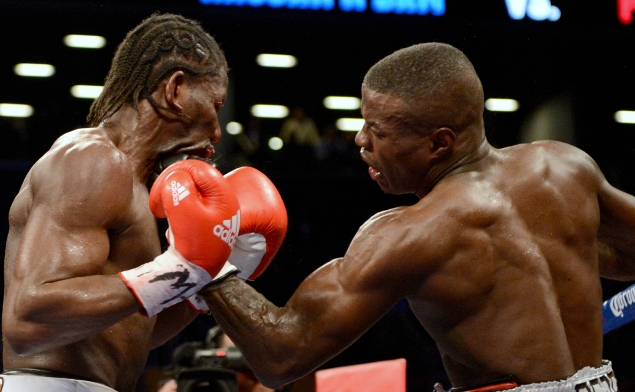 Formerly the WBO’s interim beltholder, N’Dam became the full titleholder after unbeaten Dmitry Pirog passed up a mandatory defense to take a more lucrative bout and then suffered a back injury that forced him to pull out of a scheduled fight with undefeated WBA “regular” titleholder Gennady Golovkin.

“I signed for the rematch for this fight. The next fight for Peter Quillin, he needs to fight me for a rematch. Peter Quillin gave the best of him today, and he won today. In my life, I never go down…I was surprised in the fourth round,” said N’Dam, during the post-fight press conference.

Golden Boy CEO Richard Schaefer acknowledged the potential for a rematch, albeit, conditionally.

“There is a rematch clause if it’s economically feasible, so I’ll be talking to the networks to see what can be done. But the WBO does not recognize immediate rematches,” said Schaefer.

“I think that the way that Hassan fought tonight, he is certainly the kind of fighter that we would like to see back here in the United States. He’s an exciting guy, he likes to fight, and this is exactly the kind of guy that we like to have here.”

ORLANDO CRUZ TO BE FEATURED ON HBO’S REAL SPORTS

Puerto Rican featherweight Orlando Cruz (19-2-1, 9 KOs), who is coming off last Friday’s unanimous decision over Jorge Pazos (20-5, 13 KOs), will be among those featured in a Tuesday evening edition of HBO’s Real Sports as part of a segment addressing gay athletes in sports.

Against Pazos, whom Cruz faced in the Civic Center, Kissimmee, Fla., the boxer made his first public appearance since openly admitting that he is gay.

Click here for a video clip from Real Sports.

“I’ve been fighting for more than 24 years and as I continue my ascendant career, I want to be true to myself. I want to try to be the best role model I can be for kids who might look into boxing as a sport and a professional career. I have and will always be a proud Puerto Rican. I have always been and always will be a proud gay man,” said Cruz in a statement that serves as a preview to an interview with Telemundo.

“I don’t want to hide any of my identities. I want people to look at me for the human being that I am. I am a professional sportsman that always bring his best to the ring. I want for people to continue to see me for my boxing skills, my character, my sportsmanship. But I also want kids who suffer from bullying to know that you can be whoever you want to be in life, including a professional boxer, that anything is possible and that who you are or whom you love should not be impediment to achieving anything in life.”

A 31-year-old who represented his country in the 2000 Olympics, Cruz has won three straight fights, two of them by knockout since, himself, being stopped in consecutive losses to Cornelius Lock and Daniel Ponce de Leon. 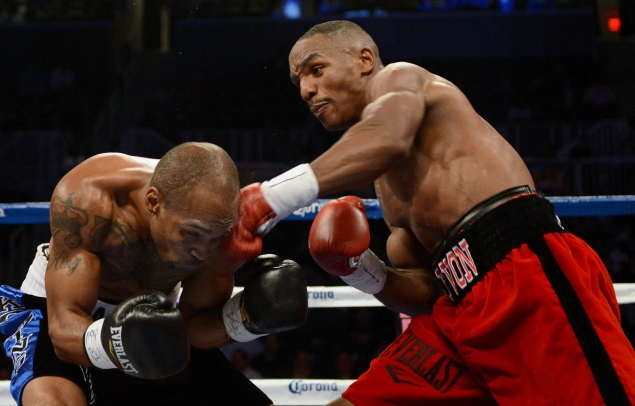 RingTV.com asked two of boxing’s premiere trainers, Roach and Kevin Cunningham, for an assessment of the presidential debates.

“Romney showed that he knows how to create jobs, and that Obama’s never had a job. He’s been a politician his entire life,” said Roach, regarding the initial debate, which most believe Romney won. “Romney had Obama on the ropes in the first debate, but now, it seems like Obama’s off the ropes and he’s back in front.”

Roach said that he expects the arrival of Manny Pacquiao from his native Philippines on Friday as he continues preparation for his fourth bout against four-division title-winner Juan Manuel Marquez that is slated for Dec. 8 in Las Vegas.

“I thought Obama was sharp and on the money last night,” said Cunningham, coming off Saturday night’s unanimous decision by Devon Alexander which dethroned Randall Bailey as IBF welterweight titlteholder. “It looked like to me that Obama had him on the ropes and was looking to get him outta there at one point.”

“Romney was fighting like a fighter in the final rounds of match in which he believed he was ahead on points,” said Arum. “So, in other words, if you’re a fighter, and your corner tells you that you’re ahead on points, you don’t want to do anything crazy in the last few rounds that would cause you to get knocked out and to lose the fight.”

“I thought that Romney had a brilliant strategy,” said Arum. “He’s way ahead with men, he’s trailing with women, and he had to appear as presidential, and, also, not attacking and all of that sort of stuff, in order to appeal to women, and that’s what he did.”

But boxing publicist, Fred Sternburg, disagreed with Arum’s take on the final debate.