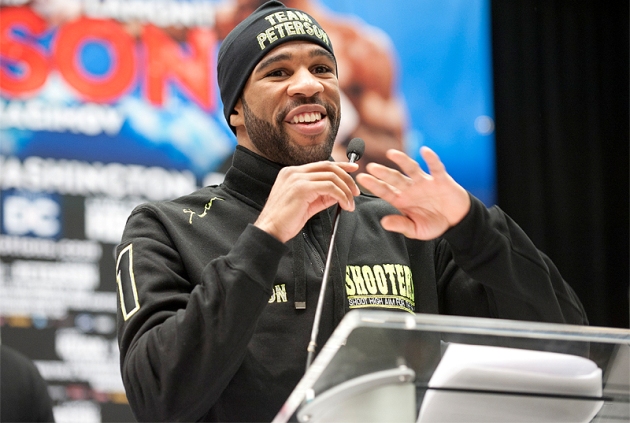 IBF junior welterweight titleholder Lamont Peterson and has been ordered to face ex-beltholder Kendall Holt, who is next in line after mandatory challenger and former strap holder Zab Judah failed to sign a contract at noon on Monday, according to IBF Championships Chairman Lindsay Tucker.

Peterson and Judah had been ordered to come to terms for a clash, but Tucker said the deadline for Judah to make the deal has passed.

“We ordered Zab last Friday to have the contract signed by 12 noon today,” said Tucker. “They didn’t sign the contract at 12 o’clock, so we went to the next available guy, and that’s Kendall Holt. So right now, Holt has been ordered to start negotiations with Peterson as the leading, available contender.”

When the two camps failed to do so, Cologne Hunter, the wife of Peterson’s manager and trainer, Barry Hunter, offered up $50,000 to win the purse bid and the right to promote a bout with Judah.

But with Peterson also reportedly considering a rematch with WBO welterweight titleholder Tim Bradley, who decisioned him in December of 2009, Judah contended that he did not receive a contract in timely fashion.

“Zab’s people said that the Peterson camp waited until the last minute to send the contract because they had no intentions of fight Zab, and that they were intending to fight Bradley,” said Tucker, of a return bout that never came to fruition.

“Zab’s people came up with a technicality on the contract, and after our legal people reviewed it, they said that there was nothing wrong with the contract, so we gave Zab until 12 noon today to sign the contract.”

Peterson is 3-0-1 with two knockouts since falling to Bradley, and is coming off a disputed split-decision that dethroned Amir Khan in December.

“We couldn’t get the deal done with Zab Judah. We wish him well, and he chose to go another way. We’re going to move on to the next guy, which is Kendall Holt,” said Andre Johnson, publicist for Hunter and Peterson.

“We have a time period within which to get it done, and that’s Nov. 22, so we’re going to work expeditiously to get a deal done. His promoter is Gary Shaw, so that’s where we are.”

The well-traveled Holt, who is 31, earned the WBO’s junior welterweight belt with a split-decision over Demetrius Hopkins in December of 2008, but lost by unanimous decision to Bradley in his next bout in April of 2009, this, despite having twice floored Bradley.

Holt is 3-2 in his past five fights, being stopped in the sixth round by Kaizer Mabuza in February of 2010, and losing by split decision to Danny Garcia in October of last year.

Holt, who has been stopped three times, rebounded from the loss to Garcia in his last fight, a second-round knockout of Tim Coleman in March.

Judah was mentioned as a potential opponent for Garcia, who defended his RING, WBA and WBC belts with a fourth-round knockout of Erik Morales on Saturday night at Barclays Center in Brooklyn, N.Y.

Judah was ringside for Garcia-Morales, as was IBF President, Daryl Peoples, observing a decision by Devon Alexander which dethroned Randall Bailey as the organization’s welterweight titleholder.

“When Daryl saw Zab and his lawyer in Brooklyn, New York, on Saturday night, he talked to him and he told him to sign the contract,” said Tucker. “Well, they didn’t sign the contract, so we went to the next available, which is Kendall Holt.”