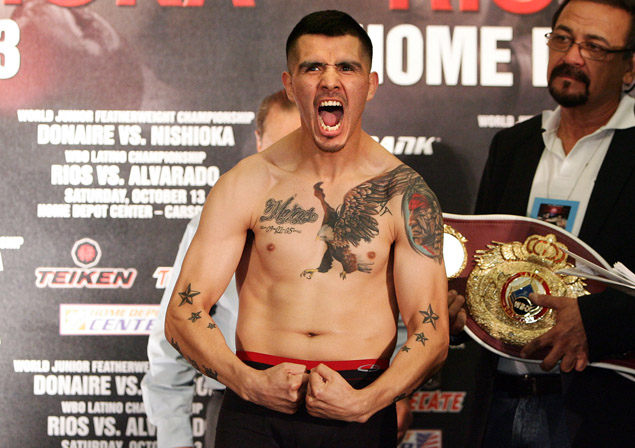 MANHATTAN BEACH, Calif. – The crowd held their collective breath as Brandon Rios stepped to the scale.

His bout with Mike Alvarado is expected to be a sure-fire Fight of the Year candidate.

But Rios making weight is never a formality.

“Bam Bam” had missed weight for three of his last five fights, all at 135 pounds, causing him to move up to 140 pounds for his Saturday Boxing After Dark date.

Ring announcer Lupe Contreras announced Rios at 140 pounds, even, and everyone was relieved there would be no hang-ups, most of all Rios, who was all smiles.

Rios withdrew from his July 7 bout with Mauricio Herrera, citing an elbow injury. But there were rumors floating around that Rios was actually overweight for that bout and used the injury as an excuse. Rios dispelled that notion and claimed the injury was legit, though he seemed to forget which body part he injured.

“I did hurt myself in that camp, but the injury in my elbow is better now,” said a defensive Rios. “Whoever told you that lie, it’s just people talking s__t, they don’t know s__t. They’re just bulls__ing. They just want to [say that] because I was in Vegas. Who gives a f__k? Yes, I did have an injury in my shoulder. Now it’s better and I’m ready to fight.”

Rios is excited to be matched with a fellow brawler and expects a blood-and-guts war on Saturday.